Mimicking the master of camouflage

Teri Odom, a NU scientist with links to CBC, builds a nanolaser that changes colors using a molecular mechanism similar to the one found in the chameleon’s skin

Congratulations to Teri Odom, NU, for her recent publication in Nano Letters, “Stretchable Nanolasing from Hybrid Quadrupole Plasmons.” The paper describes the development of a new laser that utilizes a stretchable polymer able to change distance between embedded nanocrystals allowing changes of the wavelength emitted from the laser, hence changes in color. The device mimics the mechanism a chameleon uses to control the spacing of nanocrystals on its skin resulting in its famous camouflage abilities. Teri is a recipient of a Pilot Project which was funded via the CBC Lever Award (2015). 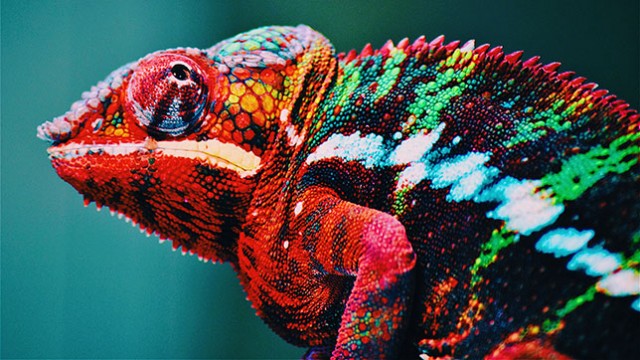 Novel nanolaser leverages the same color-changing mechanism that a chameleon uses to camouflage its skin.

EVANSTON, Ill. — As a chameleon shifts its color from turquoise to pink to orange to green, nature’s design principles are at play. Complex nano-mechanics are quietly and effortlessly working to camouflage the lizard’s skin to match its environment.

Inspired by nature, a Northwestern University team has developed a novel nanolaser that changes colors using the same mechanism as chameleons. The work could open the door for advances in flexible optical displays in smartphones and televisions, wearable photonic devices and ultra-sensitive sensors that measure strain.

“Chameleons can easily change their colors by controlling the spacing among the nanocrystals on their skin, which determines the color we observe,” said Teri W. Odom, Charles E. and Emma H. Morrison Professor of Chemistry in Northwestern’s Weinberg College of Arts and Sciences. “This coloring based on surface structure is chemically stable and robust.” 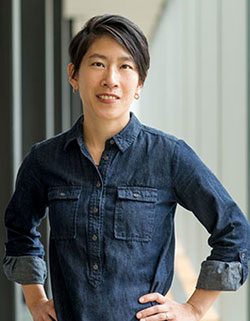 The research was published online [yesterday] on June 18, 2018 in the journal Nano Letters. Odom, who is the associate director of Northwestern’s International Institute of Nanotechnology, and George C. Schatz, Professor of Chemistry in Weinberg, served as the paper’s co-corresponding authors.

The same way a chameleon controls the spacing of nanocrystals on its skin, the Northwestern team’s laser exploits periodic arrays of metal nanoparticles on a stretchable, polymer matrix. As the matrix either stretches to pull the nanoparticles farther apart or contracts to push them closer together, the wavelength emitted from the laser changes wavelength, which also changes its color.

“Hence, by stretching and releasing the elastomer substrate, we could select the emission color at will,” Odom said.

The resulting laser is robust, tunable, reversible and has a high sensitivity to strain. These properties are critical for applications in responsive optical displays, on-chip photonic circuits and multiplexed optical communication.

The study was supported by the National Science Foundation (award number DMR-1608258) and the Vannevar Bush Faculty Fellowship from the U.S. Department of Defense (award number N00014-17-1-3023). Danqing Wang, a graduate student in Odom’s laboratory, served as the paper’s first author.

Adapted (with modifications) from the Northwestern Now, by Amanda Morris, published on June 20, 2018.