Computer model simulates sense of touch from the entire hand

The CBC would like to congratulate 2013 Catalyst team member Sliman Bensmaia of UChicago for his recently published work that was partially supported by Catalyst funding. The publication, “Simulating tactile signals from the whole hand with millisecond precision,” appeared in the July 11, 2017, issue of PNAS. The authors report the development of a computer model that can simulate the response of nerves in the hand to touch. The new tool will be of enormous value in the field of hand bioprosthetics.

Neuroscientists from the University of Chicago have developed a computer model that can simulate the response of nerves in the hand to any pattern of touch stimulation on the skin. The tool reconstructs the response of more than 12,500 nerve fibers with millisecond precision, taking into account the mechanics of the skin as it presses up against and moves across objects. 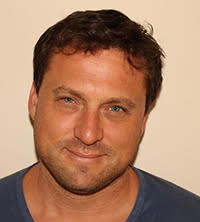 “Almost everything we know about how the nerve responds to stimulation on the skin of the hand is built into this model,” said Sliman Bensmaia, PhD (right), associate professor of organismal biology and anatomy at the University of Chicago, and principal investigator for the new research. “Finally, you can see how all these nerve fibers work together to give rise to touch.”

Details of the model were published this week in the Proceedings of the National Academy of Sciences. The study, led by postdoctoral scholars Hannes Saal and Benoit Delhaye, along with Brandon Rayhaun, a former undergraduate in the lab, builds upon years of research by Bensmaia’s team on how the nervous system and brain perceive the sense of touch.

Previously, researchers had to conduct costly and time-consuming experiments with animals or human subjects to see how the nervous system responds to a given touch stimulus. Even then, they could only record responses from one neuron at a time. But the sensation of touch comes from thousands of nerve fibers responding in concert as the hand touches, holds, and manipulates objects. The responses of individual nerve fibers aren’t enough to convey stimulus information by themselves. Rather, information about objects we grasp is distributed over large groups of touch-sensitive nerves working together.

For instance, when you hold a cell phone in your hand, some of the nerve response is driven by skin receptors located where the edges of the phone press into your fingertips. But skin deformations also radiate away from this area, down the fingers, and throughout the rest of the hand, activating many other receptors in the process. The simulation reveals how interacting with an object creates these unique, detailed patterns of nerve activity.

In addition to its impact on the basic understanding of how these sensations work, the model is also a foundation for restoring touch in bionic hands for amputees. To achieve realistic feelings of touch, neural engineers try to reproduce the natural patterns of nerve activity generated when we manipulate objects. The computer model provides engineers with the nerve output generated by a given stimulus, which can then be recreated in a prosthetic by electrically stimulating the nerve through an interface implanted in the body.

Bensmaia and his team validated the output of the model against data from a wide variety of experiments conducted by other research teams, and show that it matches their output with millisecond precision. The software will be available as a free download, so other engineers can begin using it in their own work.

“Using a model to reproduce a biological system precisely is challenging, and we have been working on this simulation for a very long time. But the final product, I think, is worth it,” Bensmaia said. “It’s a tool that will yield insights that were previously unattainable.”

Source: Adapted (with modifications) from the UChicago Science Life. Posted on June 26, 2017 by Matt Wood in At the Bench.