CBC awardee, Rachel Poretsky, UIC, is looking into the cause-effect correlations between the athletic gut microflora and the athlete’s performance

Three UIC collaborators, Craig Horswill and Rachel Poretsky, and PhD student Jarrad Hampton-Marcell, are studying the effects of the diet, training and changes in the gut bacterial flora of UIC swimmers on their athletic performance. And, it appears that a gut microbiome composition of the athletes changes depending on the training phase; e.g. during the training peak versus during the tapering phase prior to a competition. The scientists plan to expand their studies to develop a better understanding of the observed correlations and to begin looking to develop new training guidance. Eventually, therapeutics such as probiotics could help athletes optimize their performance capabilities. One of the collaborators, Rachel Poretsky is a twice CBC awardee: she was a co-recipient of a CBC Catalyst Award (2014) and a CBC Postdoctoral Research Award (2015). 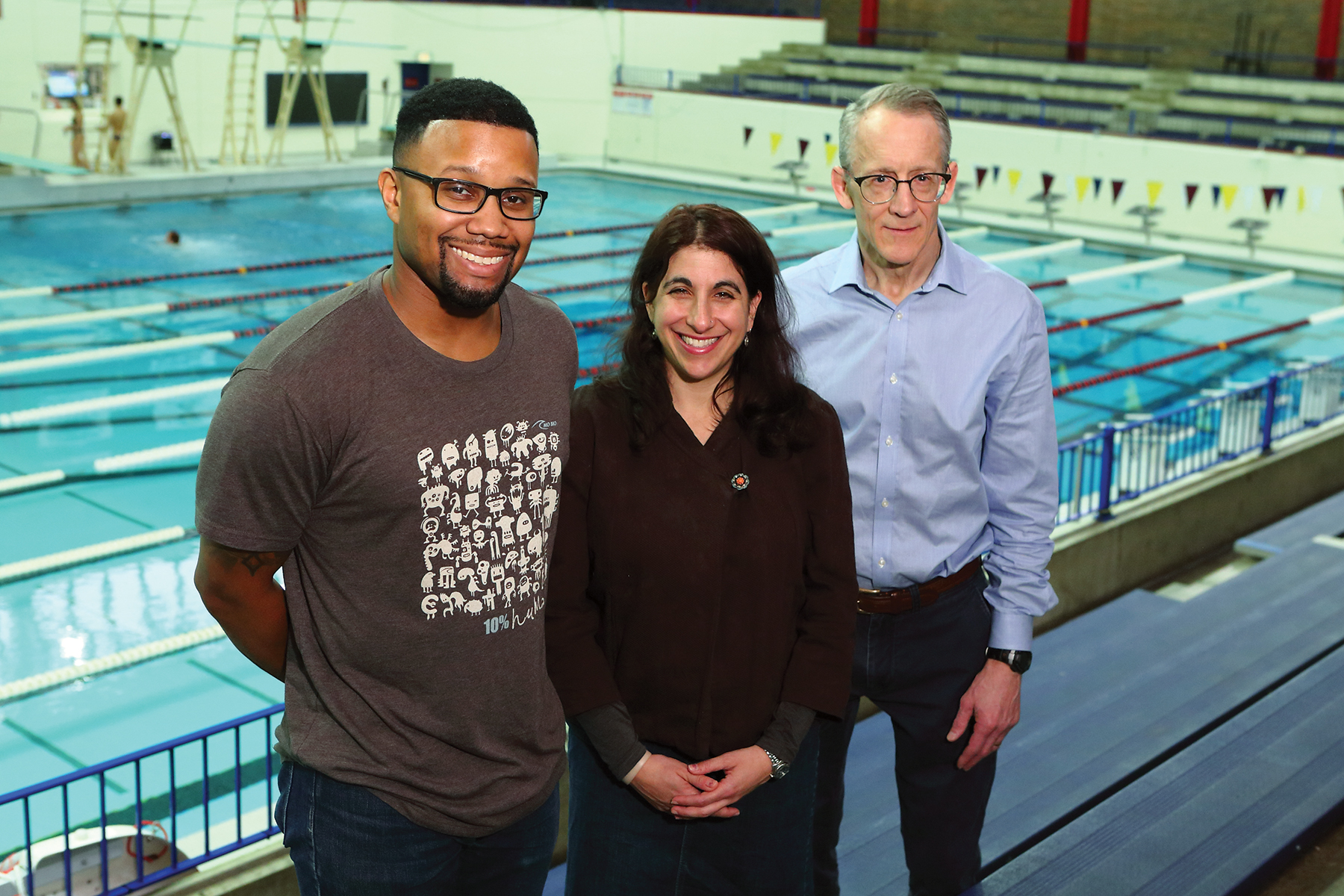 UIC collaborators Jarrad Hampton-Marcell, Rachel Poretsky and Craig Horswill are studying how the diet, training and changes in the gut of UIC swimmers impacts their athletic performance. (Photo: Jenny Fontaine)

There’s something living in the gut, and for athletes, it could be one reason why they’re better at what they do.

Microbes, or tiny bacteria, exist in everyone’s intestines in what are called microbial communities. These small communities, which are acquired at birth and influenced by things like lifestyle traits, medical history and dietary habits, can largely impact behavior and overall health. UIC researchers are focusing on another area: exercise.

“We know bacteria can actively contribute to energy metabolism for the host,” said Jarrad Hampton-Marcell, a Ph.D. student in biological sciences. As a scientist at Argonne National Laboratory, he’s looked at germs in all types of environments, including waterways, gymnasiums and hospitals.

For microbial communities in humans, he’s studying how changes in exercise influence microbes and how microbes impact athletic performance, starting with UIC swimmers.

Hampton-Marcell has tracked student athletes during their training seasons in two pilot studies, focusing on intensity, yardage, body composition and changes happening in their gut through fecal samples. Their findings aren’t what you would expect.

After observing UIC swimmers during their competitive peaks, for example, Hampton-Marcell and his mentors from the east and west sides of campus guessed that athletes who didn’t change their diet while tapering off their training would gain anywhere from 3 to 9 pounds. That wasn’t the case.

“We still have to work up some of the data to better understand that,” said project collaborator Craig Horswill, clinical associate professor of kinesiology and nutrition in the College of Applied Health Sciences.

Athletes could be naturally cutting back on calories, said Horswill. Exercise and the microbiome could also be keeping weight gain at bay while stalling fatigue and improving performance.

“There seems to be an inverse relationship between some of the organisms, where one is growing and the other is actually decreasing simultaneously,” added Hampton-Marcell.

“One bacteria commonly associated with carbohydrate breakdown seemed to be differentially abundant as training tapered,” added co-collaborator Rachel Poretsky, assistant professor of biological sciences in the College of Liberal Arts and Sciences.

Poretsky noted that this is the first time researchers have followed a shift in athlete training that is reflected in the microbiome. “

It gives us an indication of the organisms that might be important,” she said.

Hampton-Marcell’s next question: how does this diverse, energy-fueling microbiome get there, and do these results reflect a larger trend?

The team is pulling data about athletes from universities and organizations around the world to find some answers. Collaborators or sources include the University of California San Diego, U.S. and Canadian databases, and publicly available data in Ireland and China.

Their results could support observed links between exercise, performance and overall health — in the competitive sphere and for everyday people.

“It has applications in things like developing probiotics, providing biomarkers for exercise, manipulating an athlete’s gut community, providing variable conditions to help regulate an athlete’s energy expenditure, or determining whether exercise manipulates the gut community in ways that can be replicated in people who are not athletes to help with problems like inflammation, diabetes and obesity,” Poretsky said.

Eventually, the team hopes to do a treatment study, using placebo and a specific fiber or probiotics to determine if and how well the “good” bacteria, which is associated with less inflammation, less stress in the body, and better athletic performance, can be maintained in athletes.

“We want to see if these things hold true,” Poretsky said.

Adapted (with modifications) from the UIC today, by Francisca Corona, published on June 12, 2018.