Congratulations to a past CBC awardee, Hossein Ardehali, NU, who is featured in the May 2018 issue of the Northwestern Medicine Magazine in an article by Bridget Kuehn. Ardehali is interested in the physiology of cardiomyocytes—heart muscle cells. Specifically, he wants to understand the role that mitochondria play in the cardiomyocyte metabolism, believing that targeting metabolic pathways may help prevent or even reverse some cardiovascular pathologies and diseases. In 2007, Ardehali received a CBC Catalyst Award for a related project, “Proteomic Analysis of Mitochondrial and Sarcomeric Proteins in Cardiomyopathy.”

Northwestern Medicine investigators are developing better treatments and care for patients with the most prevalent of diseases. 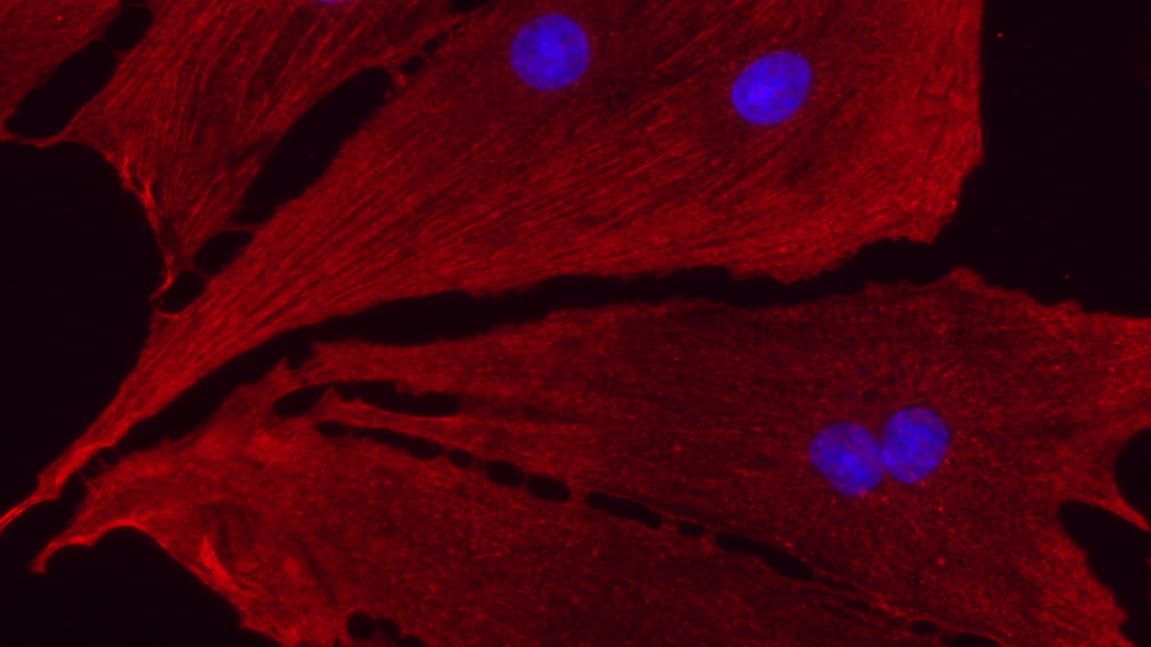 This January, the American Heart Association (AHA) released updated heart disease statistics. The report contained many all-too-familiar facts and figures: Cardiovascular diseases remain the No. 1 cause of death in the world and in the United States. But it also shared new findings: An estimated 103 million people — nearly half of all U.S. adults — have high blood pressure and are at risk for heart attacks and strokes, following AHA guidelines published last fall that redefine the [blood pressure categories in the new guideline.]

The numbers highlight the critical importance of cardiovascular disease (CVD) research: basic science studies to understand its underpinnings; translational work to turn findings in the lab into viable treatments for patients; clinical trials to test new behavioral interventions, medications and care models; and population studies to understand how we can minimize risk factors so the disease doesn’t manifest in the first place.

Across Northwestern departments and within the Feinberg Cardiovascular and Renal Research Institute, an illustrious cohort of investigators is doing just that.

Discover more of the wide-reaching CVD research led by Northwestern faculty, including studies exploring home-based interventions for a common form atherosclerosis, the molecular roots of heart failure and improvements for cardiovascular care in low- and middle-income settings around the world.

Below, please find an excerpt from the article dedicated to past CBC awardee Hossein Ardehali, MD, PhD, NU. To read the full article CLICK HERE. 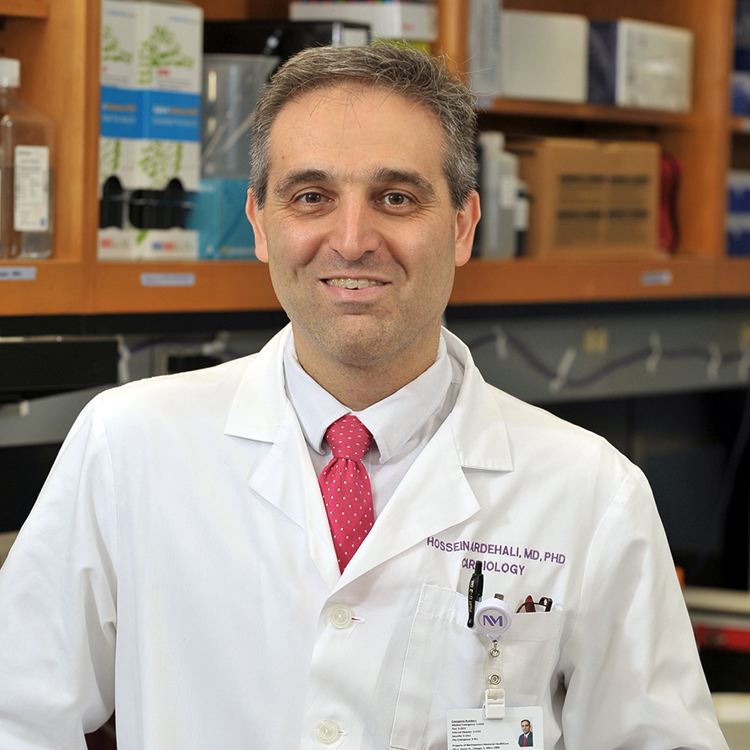 Scientists in the Feinberg Cardiovascular and Renal Research Institute (FCVRI), are also opening up new avenues for treating CVD, but they’re taking a different approach, looking at what goes wrong in the heart from a basic science perspective.

Hossein Ardehali, MD, PhD, director of the FCVRI’s Center for Molecular Cardiology, focuses on understanding the role of mitochondria in heart failure. These cellular powerhouses produce energy in the form of a chemical called adenosine triphosphate (ATP). The heart is a huge consumer of this energy, using more than six kilograms of ATP a day as it pushes blood throughout the body.

“Understanding cardiac metabolism is really important,” says Ardehali, also a professor of Medicine in the Division of Cardiology and of Pharmacology. “We think that if we target metabolism, we can reverse some CVD processes.”

Historically, studying cellular metabolic processes has been the focus of endocrinologists studying diseases like diabetes; Ardehali applies methods he learned training with an endocrinologist to CVD. 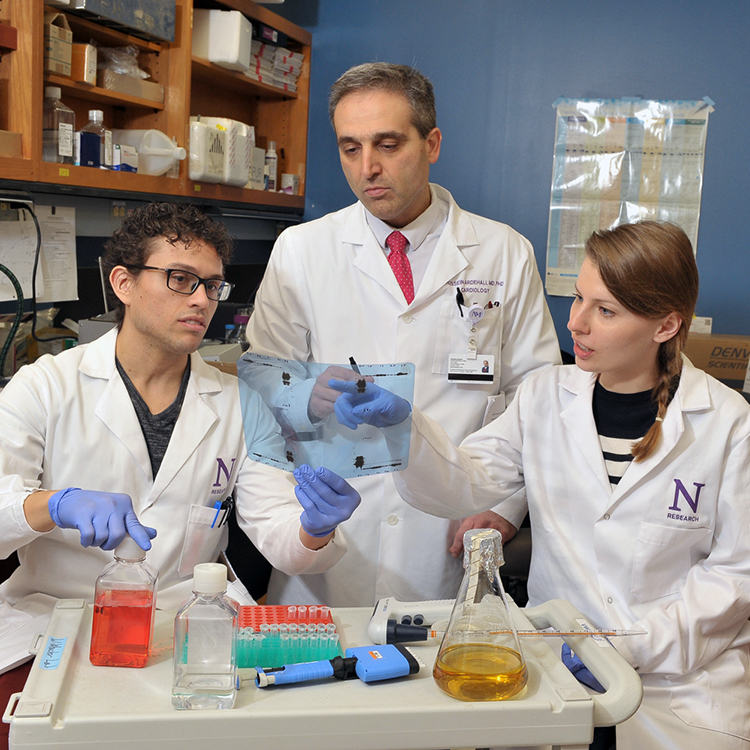 “We are going into an area that has not been studied in the past to understand the pathways involved in energy production,” he says. For example, his lab published a paper in Nature Communications showing that a novel protein that regulates both sugar and fat metabolism is critical for normal heart function, and that its deletion leads to heart failure in mice. Now, the group is turning its focus to how changes in cardiac metabolic processes regulate epigenetics in the heart.

“There is crosstalk between all of these pathways,” Ardehali says. “It makes perfect sense because there are no isolated systems in our bodies.”

His lab has also shown that elevated levels of iron in the mitochondria contribute to heart muscle weakening caused by inadequate blood flow or the cancer drug doxorubicin, findings published in the Journal of the American Heart Assocation and the Journal of Clinical Investigation. The team is now working with Northwestern’s Department of Chemistry to develop iron-chelators, drugs that help strip excess iron from the body.

“We are trying to target mitochondrial iron in the heart as a way of protecting the heart from getting damaged,” Ardehali says. The research is very timely because some patients with heart failure who are iron deficient are currently given infusions of iron, which he worries could be harmful.

As a physician-scientist, Ardehali is also collaborating with colleagues in the clinic to apply his findings to patients. “We are at the stage where we can translate our findings to clinical practice,” he says.

Adapted (with modifications) from the Northwestern Medicine Magazine, by Bridget M Kuehn, published on June 4, 2018.