Spotlight on a NU neurosurgeon and triple CBC awardee, Maciej Lesniak, and his quest to treat glioblastoma… without a knife

CBC is happy to share a profile of Dr. Maciej (Matt) Lesniak, NU, recently published in the Northwestern Research News. The article author, Matt Golosinski, describes Lesniak’s fascinating odyssey, from competitive skiing as a youngster in Poland—his homeland, through studies at Harvard and John Hopkins, through his twelve-year tenure at UChicago, and finally becoming Chair of the Department of Neurological Surgery, NU. In his work, Matt combines neurosurgical practice with laboratory work, and is currently engaged in a Phase 1 clinical trial aimed to assess a new method from his lab to fight glioblastoma. Lesniak and three of his postdocs have received CBC Postdoctoral Research Awards: one in 2014, while at UChicago, and two in 2015 and 2016, after he moved to NU. CBC is proud to have supported Matt in his research combatting the very aggressive and yet untamed, brain tumor, glioblastoma.

Hope from the Lab 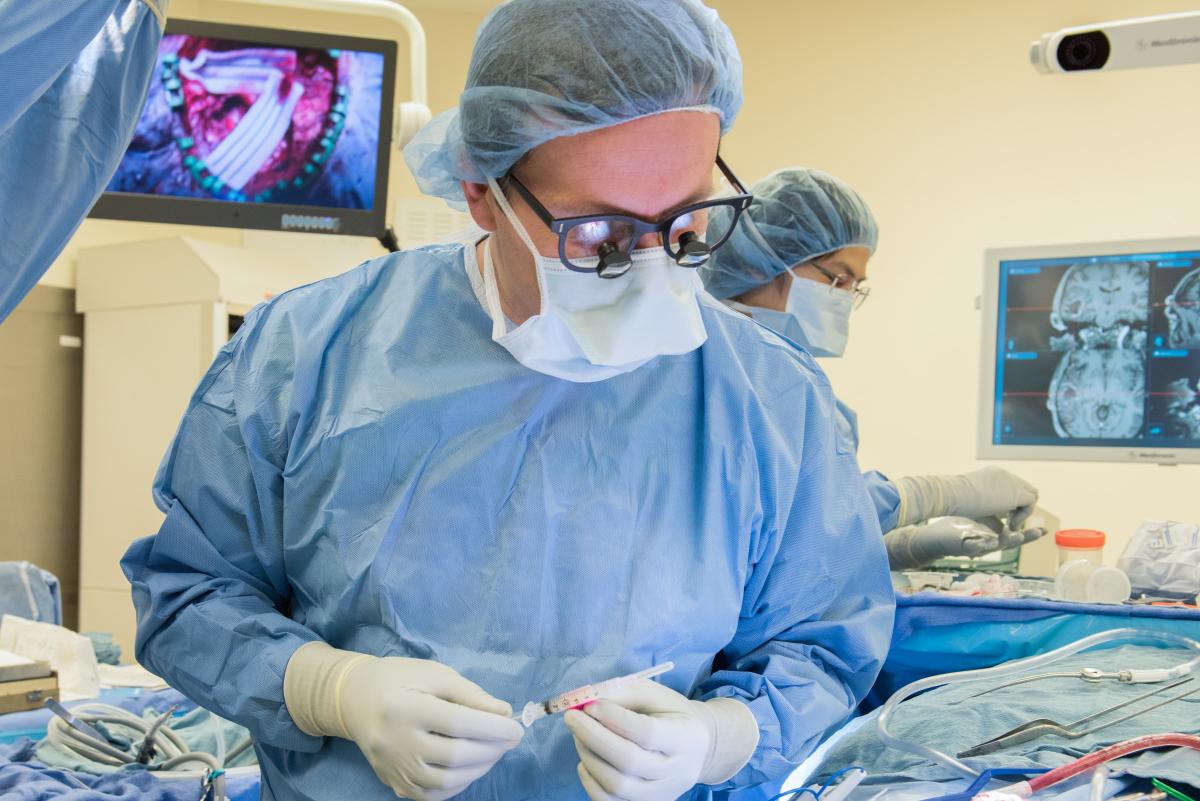 Northwestern Medicine neurosurgeon Maciej “Matt” Lesniak stalks an aggressive killer, and one of the most insidious: glioblastomas. These fast-growing, highly malignant brain cancers are fed by a rich blood supply and usually consist of a complex mix of cells whose microscopic roots sink deep into healthy tissue, threatening to erase our words, memories, and identity, making treatment challenging and recurrence likely. 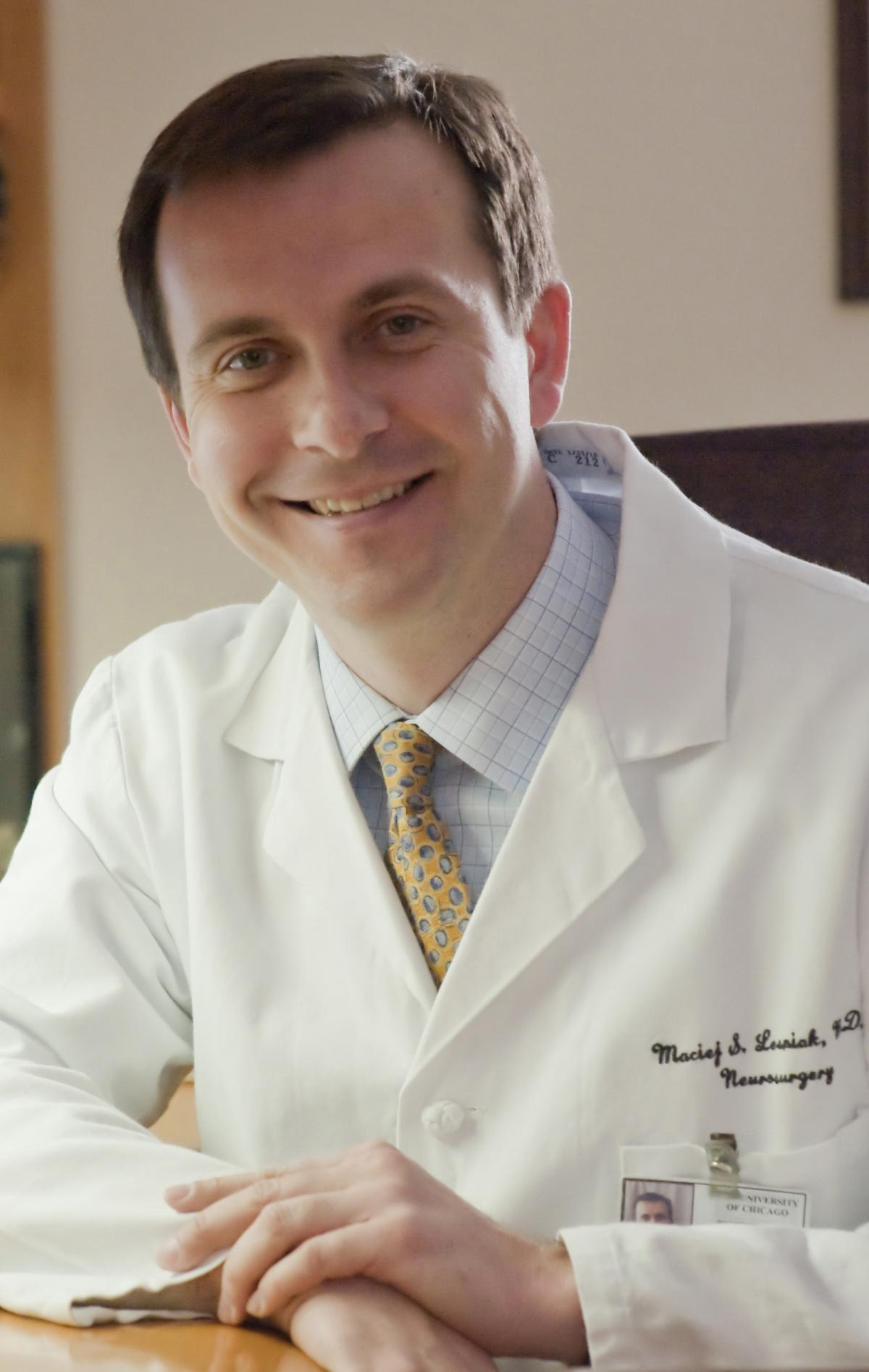 Relatively rare among the 100 or so brain and nervous system tumors, glioblastomas make up about 15 percent of all primary brain tumors, with some 12,000 new cases reported each year, including those of high-profile patients like Senator John McCain (R-Ariz). Prognosis is grim. Even with treatment, median life expectancy after diagnosis is 15 months.

Lesniak and his Northwestern colleagues at the Robert H. Lurie Comprehensive Cancer Center of Northwestern University are fighting back against these long odds, using both the laboratory and operating room in a quest to develop novel ways to attack brain cancer. The most recent attempt involves a new drug and an innovative approach that combines neural stem cells as a vehicle to infect cancer cells with a modified common cold virus. The pioneering effort, a collaboration among Lesniak, renowned neuro-oncologist Roger Stupp, and City of Hope’s Karen Aboody, gained the approval of the Food and Drug Administration (FDA) in 2017 and paved the way for the very first Phase 1 clinical trial, which is currently ongoing.

“This is the first time that the FDA has allowed a clinical trial of this sort to occur at the time of initial diagnosis,” says Lesniak, the Michael J. Marchese Professor and chair of neurological surgery at the Feinberg School of Medicine.

The vast majority of clinical trials, he says, happen only after a patient undergoes surgery, chemotherapy, and radiation and has suffered a recurrence of cancer. The Northwestern team earned the FDA greenlight to use stem cells to deliver an oncolytic virus — one that preferentially attacks cancer cells while leaving other tissue unharmed — to learn whether this approach could work synergistically with traditional treatment protocols to extend the survival rates of patients with glioblastoma.

“We have done a lot of preclinical work that suggests we should be treating patients up front, not when they recur,” says Lesniak. Currently, six patients are enrolled in the study.

Glioblastoma’s deadly pathogenesis makes it easy to understand why patients would be desperate for hopeful intervention, sooner not later. In addition to the body’s robust immuno-defenses that confound treatment, these cancers are notoriously resistant and difficult to treat because of where and how they grow. Their often-eclectic cellular composition also poses challenges, since some kinds of cells prove much more difficult to kill.

“These tumors affect the very core of who we are,” says Lesniak, who joined Northwestern in 2015, after serving as the director of Neurosurgical Oncology and the Neuro-Oncology Research Laboratories at the University of Chicago. Drugs that could fight the cancer might also cause dementia or destroy memory, vision, or speech. “Whenever we introduce a therapy, we have to consider the benefits versus the harm. Anytime we try to kill this cancer that is already killing the essence of who you are, we may actually destroy who you are as a person.”

Another major hurdle is delivering drugs to the tumor site. To do so, physicians must get past the blood-brain barrier (BBB), the thick band of blood vessels that protects the brain from toxins. This barrier prevents most chemotherapeutic drugs from getting into the brain, says Lesniak. (One notable exception: temozolomide, an oral medication that, in 2005, Stupp demonstrated could be effective in treating glioblastoma. It is now a front-line standard of care for these cancers.) Because of this barrier, physicians often employ other strategies, such as direct injection or implanting catheters in the brain cavity to infuse medicines over time. Even with injection, it is problematic to disseminate the drug so that the medication spreads throughout the tumor mass. Lesniak’s innovation, a decade in the making, seeks to address this problem.

“Working with my colleague Karen Aboody, I came up with this idea: what if we were to use stem cells almost as cars for these passengers, which are viruses?” says Lesniak. “Neural stem cells tend to travel within hours to areas of injury, areas of stroke or brain tumors. They could disperse the oncolytic virus with a beautiful homogenous spread.”

That kind of approach requires collaboration among physicians with a shared passion for eradicating disease along with an institutional ecosystem that nurtures research, teaching, and clinical practice. Lesniak says that Northwestern provides exceptional resources and leadership to attract top global talent, including more recent hires, such as Stupp, biochemist Ali Shilatifard, and neuropathologist Dan Brat.

“What makes us so effective at Northwestern are the people,” says Lesniak. “Our leaders at the School of Medicine and at Northwestern Medicine — Eric Nielson and Dean Harrison — have a shared vision for making a difference in cancer research, not just in Chicago or the region, but across the country and the world. That vision translates into extraordinary recruitment of people who are determined to make a difference for patients.”

Often, he says, that talent includes physician-scientists who bridge the research lab and clinical practice and whose efforts, in conjunction with the support of the Lurie Comprehensive Cancer Center, directed by Leonidas Platanias, can help launch clinical trials that offer unique potential for patients.

Lesniak is himself an internationally recognized physician-scientist. He was awarded the 2015 National Cancer Institute Outstanding Investigator Award — one of only 50 in the United States — for his transformative cancer research, which combines exemplary clinical and laboratory skills. He has been overall primary investigator or site primary investigator of more than 25 multi-institutional clinical trials for recurrent and newly diagnosed malignant gliomas involving these biological therapies and his research has been continually supported by the National Institutes of Health, the American Cancer Society, and the Alliance for Cancer Gene Therapy.

A native of Krakow, Poland, Lesniak grew up as an only child surrounded by the old city’s rich history of culture, tradition, and academic rigor. Home to one of the largest public squares in Europe and one of the continent’s oldest research institutions, Jagiellonian University, Krakow offered Lesniak an invigorating mix of ancient and modern. He recalls always valuing education and languages (he speaks four of them), but was truly passionate about skiing.

“I was competing all the time as a kid, both in Poland and across Europe,” he says. When he was 14, his parents brought him to the United States. “Unfortunately, Chicago put an end to my skiing!” he says laughing.

However, his mother, a now-retired obstetrician, was an early mentor who helped spark Lesniak’s interest in medicine. He would go on to Harvard College and Johns Hopkins, where he earned his medical degree in general surgery and then neurological surgery and neuro-oncology. Mentors there included Henry Brem, a neurosurgeon who also invented Gliadel wafers to intraoperatively deliver chemotherapy to brain tumors. “I was amazed to learn that a surgeon could do more than just operate, that they could bring this scientific approach to their work,” says Lesniak. “This was very inspirational to me.”

Today, Lesniak says he is inspired by his own exceptional Northwestern colleagues, and he has tried to serve as a role model for the next generation. During his 2003-15 tenure at University of Chicago, he won the John Arnold Award for outstanding mentorship of medical students. In fact, several of the postdoctoral students that worked in the Lesniak lab at Chicago are now on faculty at Northwestern, pursuing their own NIH-sponsored research.

One of those students, Derek Wainwright, remembers Lesniak providing “unprecedented freedom to develop my own experiments, test my own hypotheses, and eventually be a strong enough candidate for faculty recruitment opportunities at many leading academic medical centers.” Wainwright says a pivotal lesson learned in the Lesniak lab was “ignorance” — never assume anything, and question everything. He says the Northwestern brain tumor community is remarkable for its talent, collegiality, and bold vision. “The scientists and clinicians here are risk takers, passionate for their work and stubbornly focused on increasing patient survival,” says Wainwright, whose own research concerns understanding the role of aging in the brain and how young and old brains respond differently to therapy.

“We are surrounded by people at Northwestern with a passion and with great ideas who inspire us to think creatively to move the field of neuro-oncology forward,” says Lesniak. “We are looking to ask important questions and develop the tools to bring to fruition our goal of curing people of this awful disease.”

Adapted (with modifications) from Northwestern Research News, by Matt Golosinski, posted on March 19, 2018.

Other NU researchers* mentioned in the article with ties to CBC: