A past CBC awardee and community member, Wonhwa Cho, UIC, becomes the inaugural UIC LAS Endowed Chair in the Sciences

Darunavir, also known as Prezista, is a drug used in the treatment of HIV/AIDS. Named after Arun Ghosh, a chemist who invented the molecule while at UIC, the drug is considered “the most successful royalty-producing patent ever developed by faculty in the University of Illinois System.” The UIC College of Liberal Arts and Sciences (LAS) is using a portion of royalties to fund four LAS Endowed Chairs in the Sciences – a first in the sciences and the first funded by research at the institution. Wonhwa Cho, professor and head of chemistry, UIC, has been named the inaugural LAS Endowed Chair in the Natural Sciences. Cho has several ties to CBC: he received two CBC Catalyst Awards (2007 and 2010), served at the CBC Scientific Review Board and, in 2009, was an invited speaker at the CBC Microscopy Forum: “Seeing Small is Believing Big.” Congratulations on the prestigious distinction, Wonhwa! 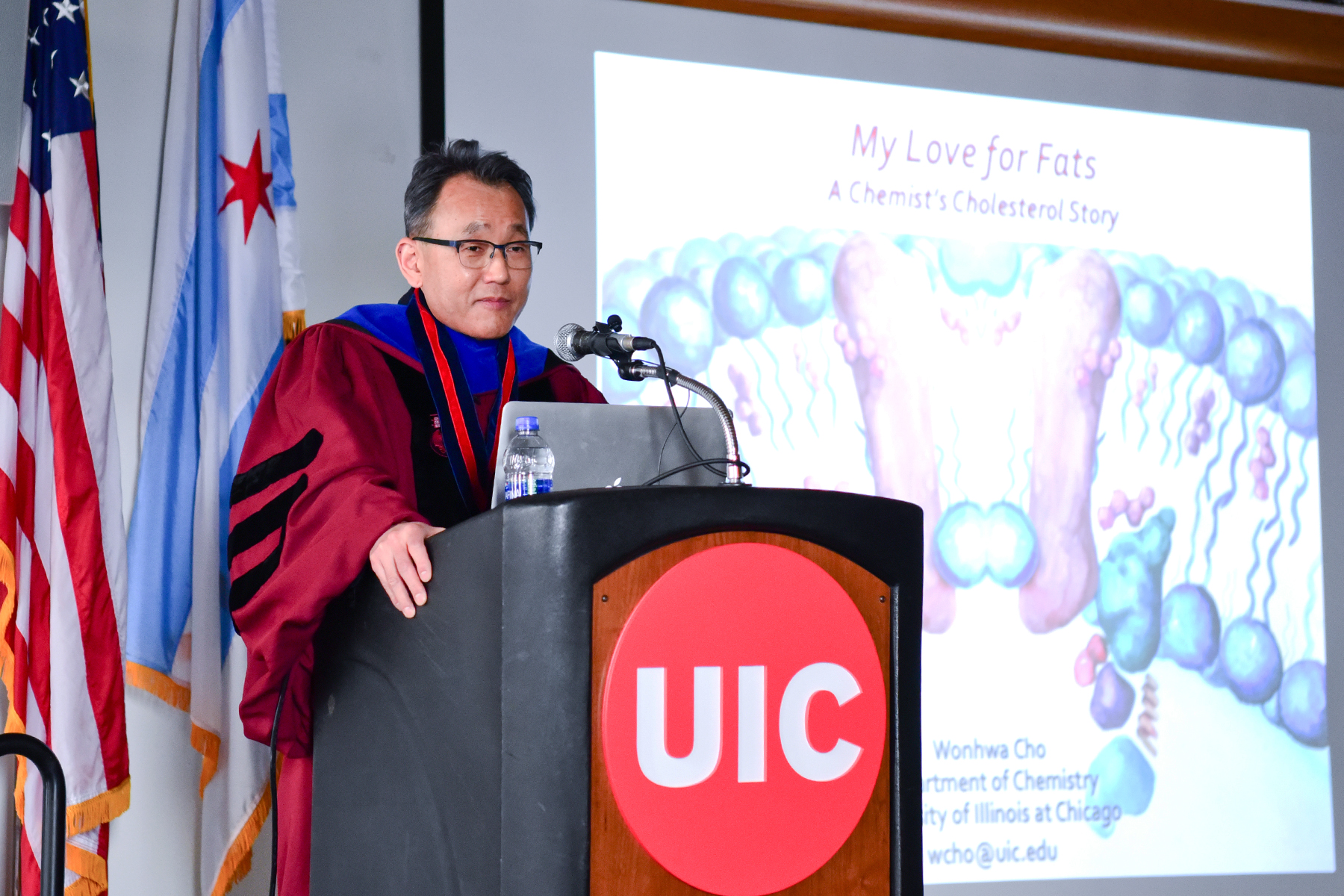 The [UIC] College of Liberal Arts and Sciences is bolstering an already strong roster of natural science researchers, thanks to the success of the HIV/AIDS drug Prezista.

UIC’s intellectual property associated with this lifesaving medicine, which was developed by former UIC chemistry professor Arun Ghosh, is the most successful royalty-producing patent ever developed by faculty in the University of Illinois System.

“While LAS, to date, already has an impressive number of endowed chair positions thanks to the generosity of its donors, the LAS Endowed Chairs in the Sciences will be the first in the sciences and the first that are funded by research,” said Astrida Orle Tantillo, dean of the college. “With about half of the college’s incoming students interested in a degree in the sciences, this cohort of renowned faculty will further contribute to UIC’s strength in being a primary institution for students seeking careers in health care.”

The college held an event Feb. 12 to celebrate the investiture of Wonhwa Cho, professor and head of chemistry, as its inaugural LAS Endowed Chair in the Natural Sciences.

An investiture of an endowed chair is one of the most significant highlights of a faculty member’s academic life.

“Bestowing such a position is a sign of appreciation and endorsement of the individual by the university, and a belief in the strong promise of further accomplishments,” Tantillo said.

Cho, who is a distinguished professor of liberal arts and sciences, conducts research focused on lipids, which form the cell membrane that acts as a barrier between the cell and the surrounding environment. His discoveries of how membrane lipids control and modulate protein networks have the potential to transform approaches to drug development, as well as basic cellular biology.

“We have selected a candidate whose research aims to elucidate the basic biochemical processes of life leading to a better understanding of how the human body functions, how diseases develop, and how we can treat them better,” said Susan Poser, provost and vice chancellor for academic affairs.

Cho, a native of Korea, has earned multiple university honors for his research and mentorship since arriving at UIC in 1990.

“This endowed chair has a special meaning to me because I have spent my entire independent research career at UIC and because all the work leading to this recognition has been performed here at UIC by UIC people,” he said. “It will allow me the freedom to pursue high-risk, high-reward projects for which it is difficult to obtain financial support through regular funding mechanisms.”

His work has been widely published in top scientific journals and continuously funded by the National Institutes of Health for over two decades.

Cho’s three concurrent NIH grants as sole principal investigator underscore his contributions to the field, including a recent five-year, $2.8 million Maximizing Investigators’ Research Award, which is designed to reward some of the most respected NIH-funded researchers.

“The college is excited to be the home of this scientific cohort focused on discovery-based research and scientific innovation,” Tantillo said.

Adapted (with modifications) from UIC today, by Brian Flood, posted on March 2, 2018.