Stefan Kathman, a CBC Scholar, Class of 2014, continues his scientific training at The Scripps Research Institute

Stefan Kathman, PhD, graduated from NU in 2016. While at NU, he worked in Alexander Statsyuk’s lab in the Department of Chemistry. Stefan was recognized as a CBC Scholar, Class of 2014, receiving the CBC Scholar Award for two years (2014-2015). Now a postdoctoral fellow at The Scripps Research Institute, Stefan has joined the laboratory of Benjamin Cravatt. An interview with Stefan is posted below. The CBC is proud to have supported Stefan during the early stage of his scientific journey. Congratulations! 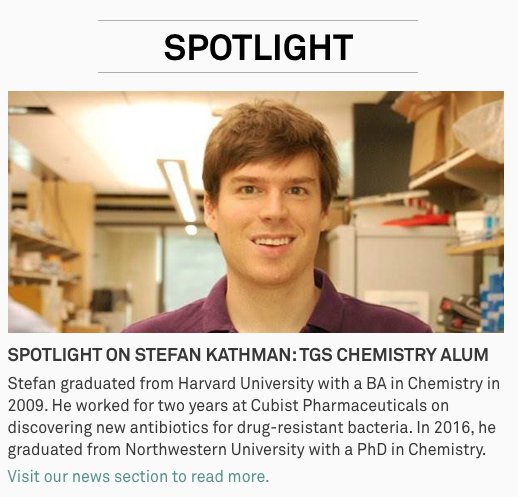 Stefan graduated from Harvard University with a BA in Chemistry in 2009. He worked for two years at Cubist Pharmaceuticals on discovering new antibiotics for drug-resistant bacteria. In 2016, he graduated from Northwestern University with a PhD in Chemistry. At Northwestern, he worked in Alexander Statsyuk’s group finding new inhibitors of enzymes involved in protein degradation and was a fellow in the Chemistry of Life Processes training program. He is now a postdoctoral fellow at The Scripps Research Institute in the lab of Benjamin Cravatt, where he uses activity-based proteomics to study new forms of cancer cell death.

What were you doing before you arrived at Northwestern?

I worked for two years in discovery chemistry at Cubist Pharmaceuticals, an antibiotics pharmaceutical company in Lexington, MA. At the time I was unsure about whether or not I wanted to pursue a PhD, so it was good for me to gain experience with “real world” applications of medicinal chemistry.

At Northwestern, I studied the enzymes that are essentially the garbage disposals of the cell. They mark proteins that are dysfunctional or no longer needed so that they can be destroyed. However, in cancer cells, these disposal enzymes often go haywire and destroy essential proteins that aren’t meant to be degraded. Although these are very challenging enzymes to find inhibitors for, I was able to find a small molecule that impairs one of these enzymes through a novel and unexpected mechanism. Now, as a postdoctoral fellow at The Scripps Research Institute, I am studying new mechanisms of cancer cell death at a more global level. I am using recently developed tools to looks for broad changes in metabolites and protein function in cancer cell death.

Tell us about a formative experience you had during graduate school/postdoctoral training that shaped the way you work today.

One of my favorite experiences was my rotation in Amy Rosenzweig’s lab as part of the CLP training grant. Instead of a typical collaboration, I got hands on experience with protein crystallography, a field in which I had no prior training. Seeing the crystal structure of my small molecule bound to its enzyme target was definitely the most exciting moment of graduate school.

What were your favorite parts about Northwestern/Chicago/Evanston?

From a research perspective, the facilities available at Northwestern were amazing. Having access to beautiful, naturally-lit lab space in Silverman Hall and all the scientific instruments at the core facilities really made it easier to do my research. Outside the lab, I loved the food scene in Evanston and Chicago, as well as being so close to the lake for running and biking.

What advice would you give your graduate student self?

Definitely find at least one activity outside of your graduate research to enjoy. At Northwestern, I was able to spend some time mentoring middle school students in Chicago through Science Club, which was a very unique and rewarding experience.

What’s next for you? Where do you hope to be in five years?

I’ll be at Scripps for the next few years, but hopefully in five years I will have started my own academic lab to further study cell death and protein degradation using my own approach.

What is one thing you are passionate about outside of your research?

I love the outdoors! Whenever I get a chance, I try to visit a national park for some camping and hiking.

Adapted (with modifications) from Northwestern, The Graduate School, posted on March 2, 2018.