In a recent paper, published in the Nature Biomedical Engineering by the Tian lab, UChicago, the authors describe their newest data on using light-activated silicon nanowires at an organismal level. They show that the nanowires, when hit with light, can stimulate the neuronal impulse transmission and affect limb movement in an animal model. By establishing this proof-of-concept methodology, the authors hope to further exploit it towards the development of a therapeutic system potentially suitable for treatment of various nervous system disorders. This collaborative paper is co-authored by scientists from all three CBC schools: UChicago, NU and UIC. Bozhi Tian, senior author, and one of co-authors, Chin-Tu Chen, UChicago, have both received CBC Postdoctoral Research Awards in the past. Their other links to CBC are listed below. Congratulations to all participants in the study!

Silicon can be crafted to wirelessly stimulate neurons, tissues or limbs 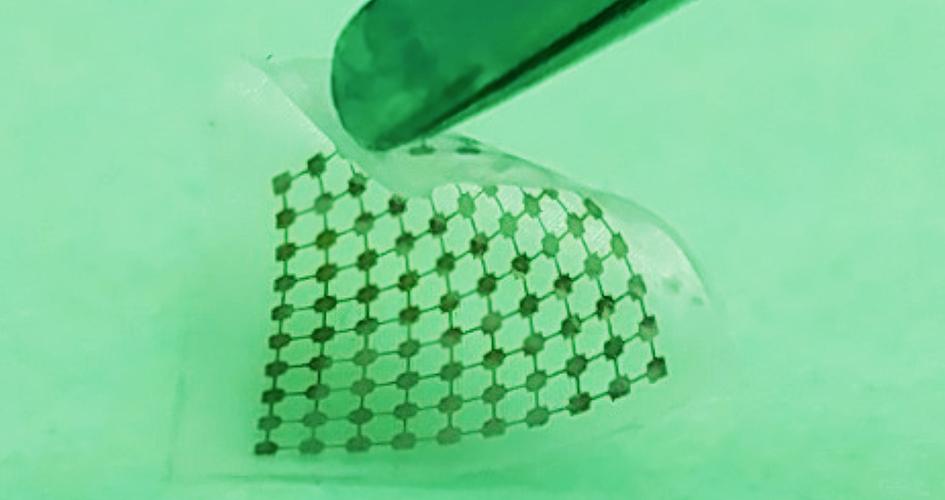 Researchers built this thin layer of silicon lace to modulate neural signals when activated by light. (Courtesy of Yuanwen Jiang and Bozhi Tian.)

Over the past five years, University of Chicago chemist Bozhi Tian has been figuring out how to control biology with light. A long-term science goal is devices to serve as the interface between researcher and body, both as a way to understand how cells talk among each other and within themselves and, eventually, as a treatment for brain or nervous system disorders by stimulating nerves to fire or limbs to move. Silicon—a versatile, biocompatible material used in both solar panels and surgical implants—is a natural choice.

In a paper published April 30 in Nature Biomedical Engineering, Tian’s team laid out a system of design principles for working with silicon to control biology at three levels—from individual organelles inside cells to tissues to entire limbs. The group has demonstrated each in cells or mice models, including the first time anyone has used light to control behavior without genetic modification.

“We want this to serve as a map, where you can decide which problem you would like to study and immediately find the right material and method to address it,” said Tian, an assistant professor in the Department of Chemistry.

The scientists’ map lays out best methods to craft silicon devices depending on both the intended task and the scale—ranging from inside a cell to a whole animal.

For example, to affect individual brain cells, silicon can be crafted to respond to light by emitting a tiny ionic current, which encourages neurons to fire. But in order to stimulate limbs, scientists need a system whose signals can travel farther and are stronger—such as a gold-coated silicon material in which light triggers a chemical reaction.

The mechanical properties of the implant are important, too. Say researchers would like to work with a larger piece of the brain, like the cortex, to control motor movement. The brain is a soft, squishy substance, so they’ll need a material that’s similarly soft and flexible, but can bind tightly against the surface. They’d want thin and lacy silicon, say the design principles.

The team favors this method because it doesn’t require genetic modification or a power supply wired in, since the silicon can be fashioned into what are essentially tiny solar panels. (Many other forms of monitoring or interacting with the brain need to have a power supply, and keeping a wire running into a patient is an infection risk.)

“We don’t have answers to a number of intrinsic questions about biology, such as whether individual mitochondria communicate remotely through bioelectric signals,” said Yuanwen Jiang, the first author on the paper, then a graduate student at UChicago and now a postdoctoral researcher at Stanford. “This set of tools could address such questions as well as pointing the way to potential solutions for nervous system disorders.”

Other researchers on the paper hailed from Northwestern University, the University of Illinois at Chicago and Hong Kong Polytechnic University.

Adapted (with modifications) from UChicago Medicine, The Forefront, by Louise Lerner, published on April 30, 2018.