Life on Earth Began in a World Based Solely on RNA

In 2009, a Spark team consisting of Jonathan Staley (UChicago), Erik Sontheimer (NU) and Alexander Mankin (UIC) received a Spark Award to fund research investigating “Noncoding RNA Structure, Function, and Evolution.” Over the years, this team has been extremely productive generating multiple publications and external funding. On November 6, 2013, Dr. Staley, along with Dr. Joseph Piccirilli, a co-investigator of the Spark team, were senior authors on a research report published in Nature, “RNA catalyses nuclear pre-mRNA splicing,” which is a continuation of the work originally funded by the 2009 Spark Award. This discovery establishes that RNA, not protein, mediates catalysis within the spliceosome.

RNA is the key functional component of spliceosomes, molecular machines that control how genes are expressed, report scientists from the University of Chicago online, Nov. 6 in Nature. The discovery establishes that RNA, not protein, is responsible for catalyzing this fundamental biological process and enriches the hypothesis that life on earth began in a world based solely on RNA. 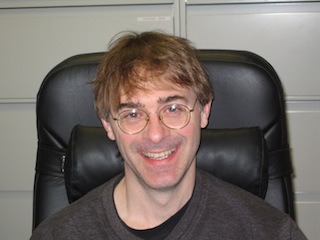 “Two of the three major processes in eukaryotic gene expression — splicing and translation — are now shown to be catalyzed by RNA,” said Jonathan Staley, PhD, (left), associate professor of molecular genetics and cell biology at the University of Chicago and co-corresponding author on the study. “The eukaryotic gene expression pathway is more of an RNA-based pathway than protein-based.”

For genes to be expressed, DNA must be translated into proteins, the structural and functional molecules that catalyze chemical reactions necessary for life. To do so, genetic information stored in DNA is first copied into strands of messenger RNA (mRNA), which are subsequently used to create proteins.

In eukaryotes, almost all genes undergo alternative splicing, in which a precursor form of mRNA is cut and re-stitched together in numerous different combinations. This significantly increases the number of proteins a single gene codes for, and is thought to explain much of the complexity in higher-order organisms. Splicing is a critical biological mechanism — at least 15 percent of all human diseases are due to splicing errors, for example.

Spliceosomes, made from proteins and short, noncoding RNA fragments, carry out splicing via catalysis, which in biological processes is usually attributed to protein-based enzymes. However, previous research has hinted that RNA in the spliceosome might be responsible. Despite decades of study, this question has thus far remained unanswered.

To address this, Staley and Joseph Piccirilli, PhD, (right), professor of biochemistry and molecular biology and chemistry at the University of Chicago, partnered with graduate students Sebastian Fica and Nicole Tuttle, co-lead authors on the study.

The researchers first disabled the ability of the spliceosome to self-correct errors in splicing. They then modified single atoms at sites on mRNA precursors known to be cut during splicing, as well as several on U6, an RNA subunit of the spliceosome hypothesized to be important for catalysis. Some of these modifications rendered splicing ineffective. They went through and systematically rescued this loss-of function, investigating sites individually and in combination. This allowed them to hone in on locations critical to splicing function and to identify connections between U6 and mRNA precursors.

The team found that the U6 RNA subunit directly controls catalytic function — effectively acting as the blade of the spliceosome. This is the first experimental proof that RNA is the key functional component of this critical biological mechanism. They also found remarkable similarities in structure and function between spliceosome RNAs (Figure b) and group II introns (Figure a), an evolutionarily-ancient class of self-splicing, catalytic RNA found in all major branches of life. They believe this indicates that these two RNA-based splicing catalysts share a common evolutionary origin, providing further evidence that key modern RNA-protein complexes, including the spliceosome and the ribosome, evolved from an RNA world.

Figure: Active sites of group II introns (a) and the spliceosome (b).

“In modern life, protein enzymes catalyze most biological reactions,” Piccirilli said. “The finding that a system like the spliceosome, which contains more protein than RNA, uses RNA for catalysis and has a molecular ancestor composed entirely of RNA suggests that the spliceosome’s reaction center may be a molecular fossil from the ‘RNA World.'”

Image credits: Jonathan Staley, PhD, courtesy of the Department of Molecular Genetics and Cell Biology (UChicago) website. Figure: Active sites of group II introns (a) and the spliceosome (b), adapted from Nature News & Views, “Metal ghosts in the splicing machine”.

The study, “RNA catalyses nuclear pre-mRNA splicing,” was supported by the Chicago Biomedical Consortium, with support from the Searle Funds at The Chicago Community Trust, and the National Institutes of Health (R01GM088656). Additional authors include Thaddeus Novak, Nan-Sheng Li, Jun Lu, Prakash Koodathingal and Qing Dai.