Sortilins Get a New Delivery Route

Aaron Turkewitz (UChicago) and Scott Brady (UIC) received a CBC Catalyst Award in 2010 entitled “Critical Components in Regulated Secretion.” Using the ciliate Tetrahymena thermophila as a model system, Turkewitz and his team studied the molecular mechanisms of secretion. Their findings, recently reported in the Journal of Cell Biology and featured on the journal cover, suggest that a dual mechanism is involved in sorting proteins into mucocysts, the secretory granule-like vesicles in Tetrahymena. Surprisingly, the assembly of mucocysts requires proteins that are classically associated with lysosome biogenesis.

Secretory granules—cargo-laden vesicles that quickly release their contents in response to extracellular stimuli—are a widespread feature of eukaryotic cells, from the neuropeptide-containing dense-core vesicles of animal neurons to the various granules that ciliate protozoans secrete in order to capture food or defend themselves against predators. Despite their prevalence, however, relatively little is known about the biogenesis of secretory granules. Briguglio et al. reveal that a family of receptors that deliver enzymes to lysosomes are also required to sort proteins to the mucocyst granules of Tetrahymena (1). 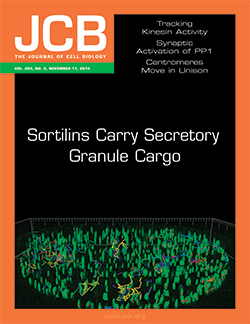 Proteins are often delivered to the correct cellular compartment by sorting receptors that bind and package them into transport vesicles. Many secretory granule proteins rely on an entirely different sorting mechanism. Immature precursors condense into progressively larger aggregates as they pass through the secretory pathway until they are incorporated into granules and proteolytically processed into their mature forms, ready for exocytosis (2). But secretory granules also contain soluble, nonaggregated cargo; how these proteins are sorted is largely unknown.

In 2005, Aaron Turkewitz’s lab at The University of Chicago identified a family of proteins that localize to mucocysts, the secretory granules of the ciliate Tetrahymena thermophila (3). Unlike other mucocyst components, these proteins didn’t aggregate on their way to the granules, so, says Turkewitz, “we thought there must be some other mechanism for sorting them.”

Turkewitz and his colleagues Joe Briguglio and Santosh Kumar used expression profiling to look for new components of the mucocyst sorting machinery (1). “Genes acting in a common pathway have to be coordinated with one another,” Turkewitz explains. “If you know one gene in the pathway, you can ask what other genes are coregulated with it at the transcriptional level.” Briguglio et al. searched a database of Tetrahymena transcriptional profiles for genes whose expression under different conditions changed in line with the expression of mucocyst cargo. This approach identified the sortilin/SOR family of transmembrane cargo receptors as potential regulators of granule biogenesis. Sure enough, deleting SOR2 or SOR4 inhibited the secretion of mucocyst components.

Sortilins deliver hydrolase enzymes to lysosomes in many eukaryotic species, but they have only been tentatively linked to secretory granule sorting (4). Briguglio et al. found that Sor4p bound to the soluble, nonaggregating mucocyst protein Grt1p and that this protein wasn’t sorted to mucocysts in SOR4-deficient Tetrahymena. Another soluble mucocyst cargo, Igr1p, was also missorted in the absence of SOR4, but a classic, self-aggregating granule protein, Grl3p, was still correctly targeted. “So one class of mucocyst proteins relies on these receptors, but the other class doesn’t,” Turkewitz says.

However, although Grl3p was delivered to mucocysts in the absence of SOR4, it wasn’t processed to its mature, secretion-ready form because Sor4p was required to sort the protease cathepsin 3, which cleaves Grl3p precursors, to the granules. “Having two separate pathways is a beautiful mechanism that gives Tetrahymena more control over mucocyst biogenesis,” Turkewitz explains.

With this in mind, Turkewitz and colleagues now plan to investigate the function of other hits from their expression profiling screen, and, if the lysosomal and secretory granule pathways do turn out to be intimately linked, to determine where along the secretory pathway these different trafficking routes diverge.

Figure: FOCAL POINT (Left to right) Aaron Turkewitz, Santosh Kumar, and Joe Briguglio investigate how different classes of cargo proteins are sorted into mucocysts, secretory granules found in the ciliate protozoan Tetrahymena thermophila. The researchers find that SOR2 and SOR4, two members of the sortilin family of lysosomal sorting receptors, target soluble, nonaggregating cargoes to the granules. Grt1p (green), for example, localizes to mucocysts docked at the surface of wild-type Tetrahymena (center) but is missorted and constitutively secreted from SOR4-deficient cells (right). The self-aggregating cargo Grl3p, on the other hand, is still targeted to mucocysts in the absence of SOR4 but isn’t processed into its mature, secretable form due to mislocalization of the protease cathepsin 3. (PHOTO COURTESY OF YUSUKE FUKUDA)

J.S. Briguglio was partially supported by National Institutes of Health Training grant T32 GM007191 and by the National Science Foundation (NSF) through a Graduate Research Fellowship. This work was funded by the Chicago Biomedical Consortium with support from The Searle Funds at The Chicago Community Trust, and by NSF grant MCB-1051985 to A.P. Turkewitz. A.P. Turkewitz is on the scientific advisory committee of Tetragenetics, Inc.