For paralyzed patients or those who lost a limb, robotic arms hold the promise of restoring functionality and independence. The Nicho Hatsopoulos lab at UChicago works exactly towards this goal. The team has recently published a study in Nature Communications, showing that rhesus monkeys with amputated limbs due to past injuries were capable of learning to control the prosthetic arms using their minds. Dynamic analysis of their neuronal networks in the study beautifully demonstrated the phenomenon of brain plasticity accompanying the learning process. Nicho has links to the CBC: in 2014 he was chosen by the CBC Scholars to present his research at the CBC Scholars “Loop Connections” Seminar. Congratulations!

Amputees can learn to control a robotic arm with their minds 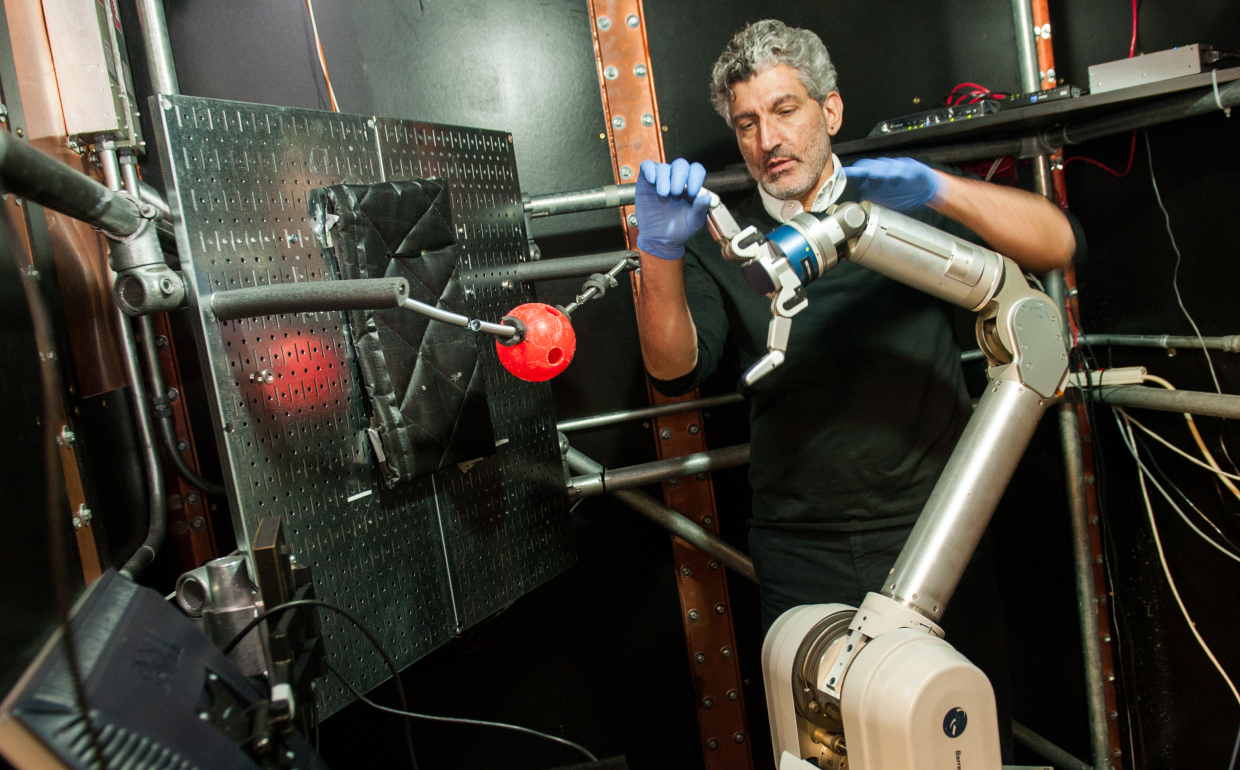 Nicho Hatsopoulos in his robotics lab at the University of Chicago (Photo: Jean Lachat)

A new study by neuroscientists at the University of Chicago shows how amputees can learn to control a robotic arm through electrodes implanted in the brain.

The research, published in Nature Communications, details changes that take place in both sides of the brain used to control the amputated limb and the remaining, intact limb. The results show both areas can create new connections to learn how to control the device, even several years after an amputation.

“That’s the novel aspect to this study, seeing that chronic, long-term amputees can learn to control a robotic limb,” said Nicho Hatsopoulos, PhD, professor of organismal biology and anatomy at UChicago and senior author of the study. “But what was also interesting was the brain’s plasticity over long-term exposure, and seeing what happened to the connectivity of the network as they learned to control the device.”

Previous experiments have shown how paralyzed human patients can move robotic limbs through a brain machine interface. The new study is one of the first to test the viability of these devices in amputees as well.

Monkeys were trained to use their thoughts to move a robotic arm and grasp a ball.

The monkeys were then trained (with generous helpings of juice) to move a robotic arm and grasp a ball using only their thoughts. The scientists recorded the activity of neurons where the electrodes were placed, and used a statistical model to calculate how the neurons were connected to each other before the experiments, during training and once the monkeys mastered the activity.

The connections between neurons on the contralateral side—the side that had been controlling the amputated arm—were sparse before the training, most likely because they had not been used for that function in a long time. But as training progressed, these connections became more robust and dense in areas used for both reaching and grasping.

On the ipsilateral side—the side that had been controlling the monkey’s intact arm—the connections were dense at the beginning of the experiments. But the researchers saw something interesting as training progressed: first the connections were pruned and the networks thinned, before rebuilding into a new, dense network.

“That means connections were shedding off as the animal was trying to learn a new task, because there is already a network controlling some other behavior,” said Karthikeyan Balasubramanian, PhD, a postdoctoral researcher who led the study. “But after a few days it started rebuilding into a new network that can control both the intact limb and the neuroprosthetic.” 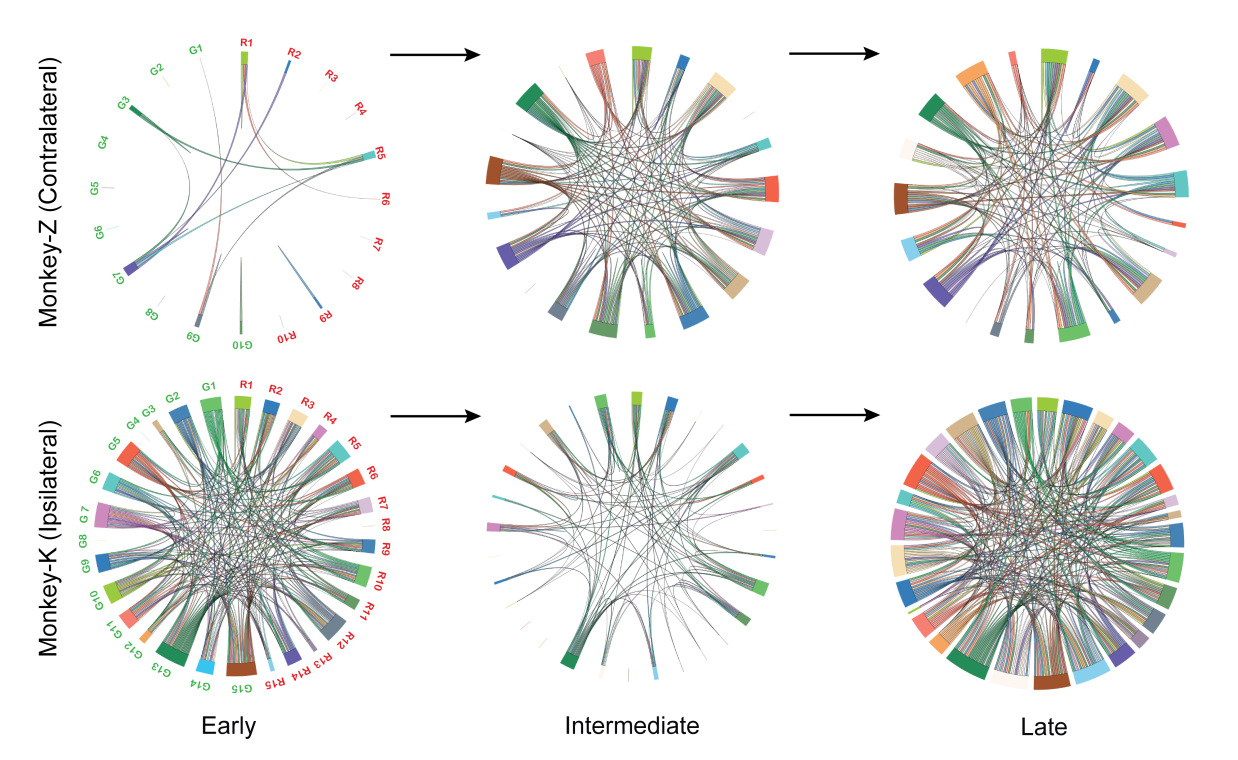 Now the team plans to continue their work by combining it with research by other groups to equip neuroprosthetic limbs with sensory feedback about touch and proprioception, which is the sense of where the limb is located in space.

“That’s how we can begin to create truly responsive neuroprosthetic limbs, when people can both move it and get natural sensations through the brain machine interface,” Hatsopoulos said.

The study, “Changes in Cortical Network Connectivity with Long-term Brain-Machine Interface Exposure after Chronic Amputation,” was published on November 27, 2017. Additional authors include Mukta Vaidya and Kazutaka Takahashi from the University of Chicago; Joshua Southerland and Andrew H. Fagg from the University of Oklahoma; Islam Badreldin and Karim Oweiss from the University of Florida; Ahmed Eleryan from Michigan State University; Kai Qian from the Illinois Institute of Technology; and Marc W. Slutzky from Northwestern University.

Adapted (with modifications) from UChicago ScienceLife, posted by Matt Wood on November 27, 2017.