The social life of bacteria. Spotlight on Andrzej Joachimiak, an Argonne scientist with links to the CBC.

A recent publication, co-authored by a team of researchers at Argonne National Laboratories, describes the crystal structure of a three-part protein system that may be involved in how a strain of E. coli bacteria interact and communicate. One of the co-authors, Andrzej Joachimiak, Director of the Structural Biology Center at Argonne and a senior fellow at UChicago’s Computation Institute, has links to CBC: he was an invited speaker at the inaugural CBC Symposium in 2002. Congratulations! 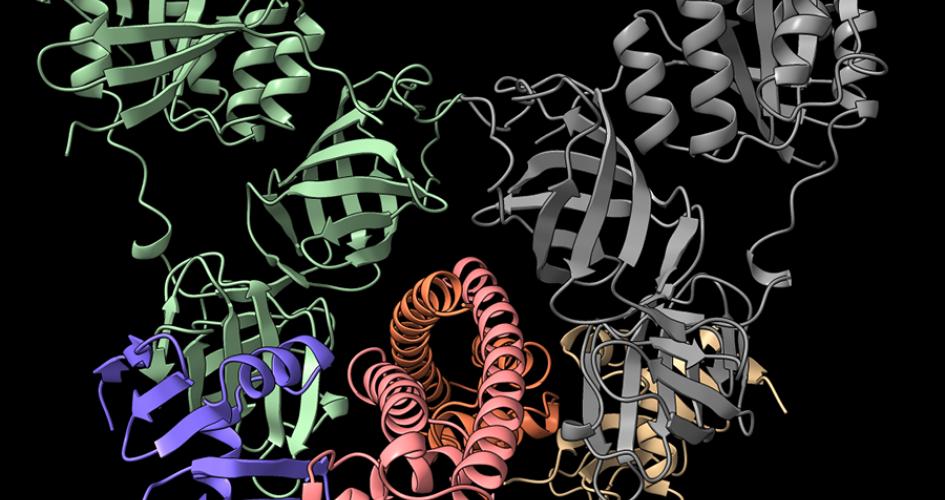 Argonne scientists have determined the molecular structure of this protein complex — an insight that could lead to new biomedical strategies for overcoming pathogenic bacteria that cause infectious diseases. This representation shows the neutralized complex of the CdiA toxin (purple and beige) with the CdiI immunity protein (orange and pink) and the elongation factor EF-Tu (grey and green).
Courtesy of Karolina Michalska / Argonne National Laboratory

Whenever we use our smartphones to check social media, we face loads of bacteria on the devices—even more than on toilet seats, according to a University of Arizona study. Those bacteria may have their own form of social network that, like Facebook, allows the single-cell creatures to attract and repel one another.

This insight stems from new research by U.S. Department of Energy scientists who have determined the molecular structures of a highly specialized set of proteins. These proteins are used by a strain of E. coli bacteria to communicate and defend their turf. 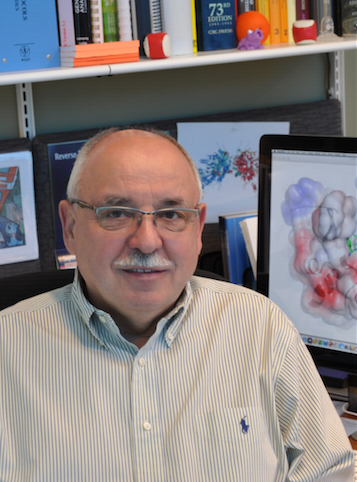 Andrzej Joachimiak, an Argonne Distinguished Scientist in the laboratory’s Biosciences Division, and 10 co-authors published their findings in the Sept. 29, 2017 issue of the journal Nucleic Acids Research.

Their work builds upon the 2005 discovery by University of California, Santa Barbara researchers that the bacteria produce toxic proteins, which they can transfer to their neighbors through direct contact to either kill or control them, possibly to gain better access to nutrients. It plays out only in densely populated microbial communities through a process called contact-dependent growth inhibition, or CDI.

“We are basically learning how the bacteria interact and communicate,” said Joachimiak. “We have some ideas that we are trying to resolve, because the toxins may have different activities. They may affect different bacteria differently.”

“These systems are found not only in soil and gut bacteria, but also in human pathogens,” said Joachimiak, who also is a senior fellow at the University of Chicago’s Computation Institute. “Some of these toxins of CDI systems are present in Pseudomonas aeruginosa, for example, which is involved in lung disease.”

The Argonne team obtained the molecular structures of proteins that belong to a three-part system of the NC101 strain of E. coli. The three parts consist of the CDI toxin, its immunity protein and its elongation factor. The latter, known as EF-Tu, is a protein that plays a key role in protein synthesis. Knowing the protein structures of all three parts helps scientists understand their function.

“We are basically learning how the bacteria interact and communicate”

The discovery of the immunity protein has led scientists to suspect that the purpose of the system includes not only competition but also signaling, the process by which bacterial cells communicate with each other, as well as killing and controlling other bacteria.

“There are really only a few molecules of the toxin that get into the neighboring cell,” said Karolina Michalska, a protein crystallographer at Argonne and co-lead author of the paper. “It’s hard to estimate the real extent of the cell damage. That’s why we were thinking it’s not meant to kill, but rather to control and communicate.”

The toxin can act on the transfer ribonucleic acid, or tRNA, only under highly specific circumstances.

“This particular toxin acts on tRNA and it needs to be a very specific set of tRNA,” Michalska said. “This is the first case where we see the elongation factor as this extra component needed for the toxin to function.”

The Argonne team collected data on the protein structures using the Structural Biology Center’s beamline at the Advanced Photon Source, a Department of Energy Office of Science User Facility. The APS is a third-generation light source, providing extremely bright X-rays that allow researchers to delve into the arrays of molecules within materials. Using this tool, researchers can characterize, or identify, biological proteins and inspect chemical processes at the nanoscale (one billionth of a meter).

Adapted (with modifications) from UChicago News, posted by Steve Koppes on October 30, 2017.