Congratulations to strong>CBC scientist Elizabeth McNally (NU) and her co-workers for identifying a new mutation that may increase risk for heart disease characterized by cardiomyopathy. The discovery was recently published in the journal Circulation. McNally is twice a recipient of CBC Awards: a Catalyst (2007) and a Spark Award (2008). An essential part of the published work was performed in a NU core facility—the Center for Advanced Molecular Imaging (CAMI)—that CBC helped to fund. CAMI’s services are available to the CBC community at “in-house” costs through the CBC Open Access Initiative.

A mutation in a newly discovered gene increases the risk of arrhythmia and cardiomyopathy, according to a Northwestern Medicine study published in Circulation.

Investigators used whole genome sequencing to identify a mutation in a family with a strong preponderance of genetic heart disease, leading them to the gene MYBPHL. The scientists went on to find that mutations in MyBP-HL proteins in mouse models led to increased ventricular chamber size — a hallmark of cardiomyopathy — and established a stem cell-based model of the human disease. 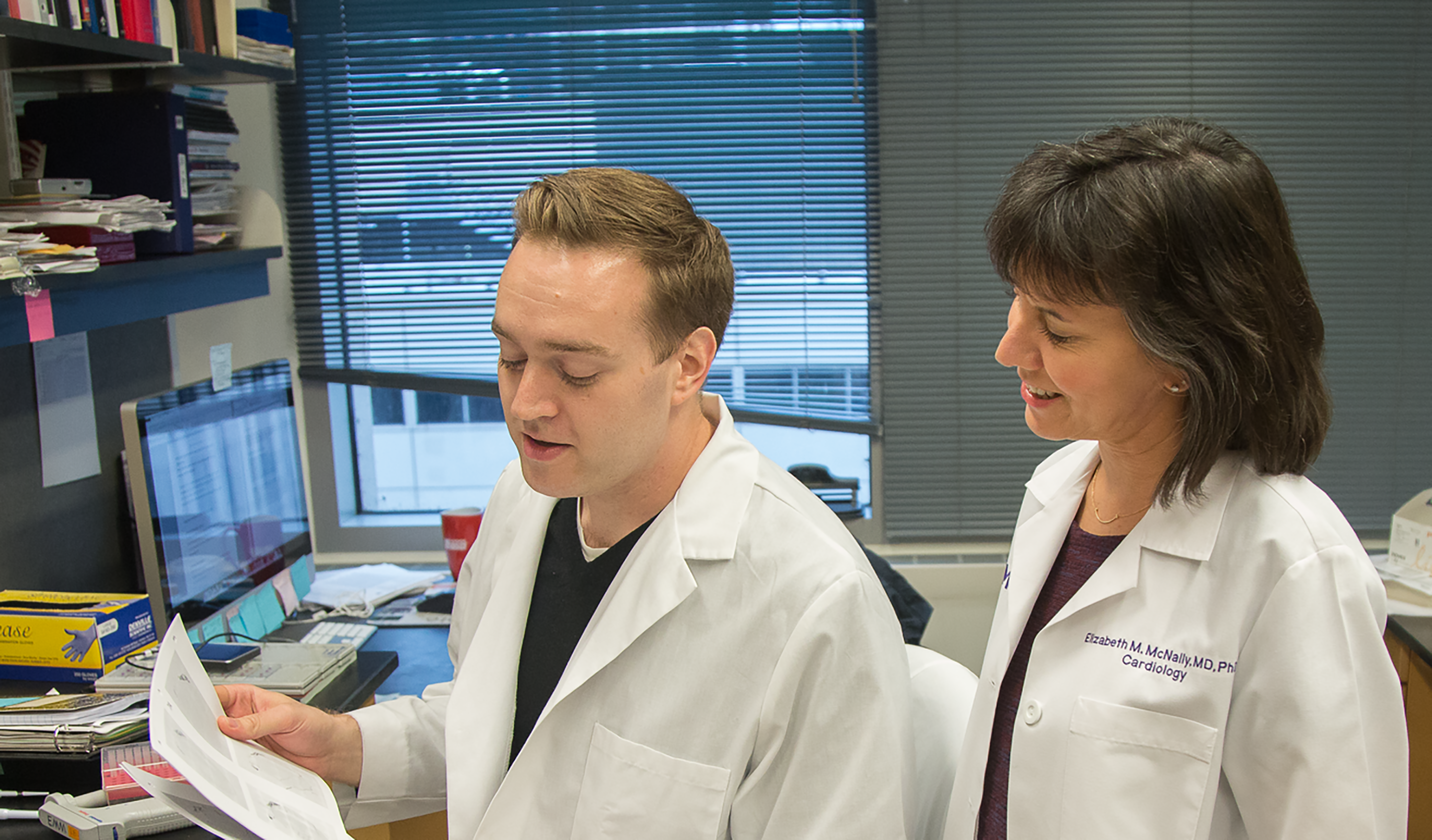 David Barefield, PhD, was the first author and Elizabeth McNally, MD, PhD, was the senior author of a study published in Circulation.

The study is a shining example of how combining advanced research techniques and clinical data can lead to novel research discoveries, said David Barefield, PhD, lead author and postdoctoral fellow in the lab of senior author Elizabeth McNally, MD, PhD, Elizabeth J. Ward Professor of Genetic Medicine and director of the Center for Genetic Medicine.

Dilated cardiomyopathy (DCM) is one in a group of conditions where the heart enlarges and cannot pump blood efficiently. These conditions often have a genetic cause and over 70 genes have mutations linked to DCM, according to the study. Patients and families now routinely receive genetic testing as part of their care through the Cardiovascular Genetics Program at the Bluhm Cardiovascular Institute.

Through these genetic tests, it is now possible to pinpoint which exact mutation is causing the condition, Barefield said.

“The problem is, the available genetic tests only come up with an answer about half the time,” he said. “When that happens, the cardiomyopathy could be caused by an unknown mutation or an unknown gene. Through the Cardiovascular Genetics Program, we can offer research using whole genome sequencing. ”

The study began with a single patient who died from heart failure in his thirties. However, the investigators had a treasure trove of additional data: his family. His mother showed signs of cardiomyopathy, and two of the patient’s siblings had pacemakers implanted at 11 years old, according to the study.

This strong pattern of familial genetic heart disease led McNally and her colleagues to perform whole genome sequencing on a number of family members.

“When Dr. Puckelwartz studied the data from the whole genome analysis, there were many variants, but one gene really jumped out: MYBPHL,” Barefield said. “It was very similar to another protein called myosin-binding protein C, a protein commonly implicated in another form of cardiomyopathy.”

Investigators found MyBP-HL was heavily expressed in the heart, and a mouse model with the gene turned off had the same signs of DCM as the patients, supporting the notion that deleting the gene increases the risk for cardiomyopathy. They also mined other data sets and found another patient with the mutation in the NUgene database, a repository of genomic data culled from Northwestern Medicine patients.

“This is where the Cardiovascular Genetics Program is so useful — you usually don’t have somebody conducting whole genome sequencing on a patient and then giving the data to somebody like me who can develop it into basic science knowledge,” Barefield said.

Further, most genetic forms of heart failure stem from mutations affecting the left ventricle, the main pumping chamber of the heart, but MYBPHL is different. The gene is heavily expressed in the atria — the smaller top chambers — introducing a new way of thinking about genetic heart failure, according to McNally.

“It’s a really important question to try and understand better,” said McNally, also a professor of Biochemistry and Molecular Genetics and of Medicine in the Division of Cardiology. “We have very few genetic markers for the atria, so this study can help us better understand the top chambers of the heart that we don’t know enough about.”

Eventually, the MYBPHL gene could be included on gene panels and better understanding its function could lead to new targets for therapy, Barefield said.

“If you know how it’s working then you’re talking about some great treatment options,” Barefield said. “Right now, we just know it can make you sick if it’s broken, but we don’t know how it makes you sick.”

Adapted (with modifications) from Northwestern Medicine News, by Will Doss, posted on October 9, 2017.

CBC Catalyst Award (2007):
PIs: E. McNally (NU; at UChicago at the time of the award), P. Schumacker and H. Ardehali (NU), and R. J. Solaro (UIC) for the project:
▸ Proteomic Analysis of Mitochondrial and Sarcomeric Proteins in Cardiomyopathy