Three recent publications by Marcus Peter, NU and his team describe a novel finding that certain small RNAs have a unique potential to kill cancer cells by eliminating genes required for cell survival. The finding may be a breakthrough in the development of a novel class of cancer therapeutics, particularly in solid tumors. Peter, a senior author on the three publications, together with one of the co-authors, Shad Thaxton, NU, have links to CBC. Peter was an invited speaker at a 2013 CBC Exploratory Workshop, focused to ovarian cancer. Thaxton and a postdoc in his lab, Linda Foid, received a 2014 CBC Postdoctoral Research Award. Congratulations! 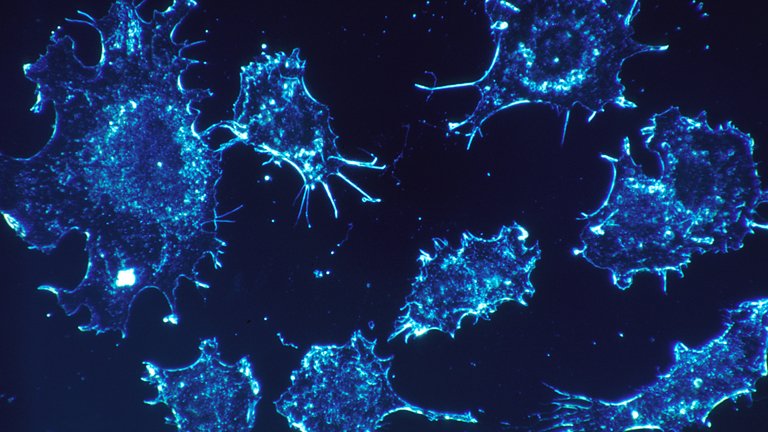 CHICAGO – Small RNA molecules originally developed as a tool to study gene function trigger a mechanism hidden in every cell that forces the cell to commit suicide, reports a new Northwestern Medicine study, the first to identify molecules to trigger a fail-safe mechanism that may protect us from cancer.

The mechanism — RNA suicide molecules — can potentially be developed into a novel form of cancer therapy, the study authors said.

Cancer cells treated with the RNA molecules never become resistant to them because they simultaneously eliminate multiple genes that cancer cells need for survival.

“It’s like committing suicide by stabbing yourself, shooting yourself and jumping off a building all at the same time,” said Northwestern scientist and lead study author Marcus Peter. “You cannot survive.”

The inability of cancer cells to develop resistance to the molecules is a first, Peter said. 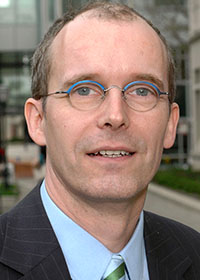 “It’s like committing suicide by stabbing yourself, shooting yourself and jumping off a building all at the same time.”

Peter and his team discovered sequences in the human genome that when converted into small double-stranded RNA molecules trigger what they believe to be an ancient kill switch in cells to prevent cancer. He has been searching for the phantom molecules with this activity for eight years.

“We think this is how multicellular organisms eliminated cancer before the development of the adaptive immune system, which is about 500 million years old,” he said. “It could be a fail safe that forces rogue cells to commit suicide. We believe it is active in every cell protecting us from cancer.”

Looking back hundreds of millions of years

Why are these molecules so powerful?

“Ever since life became multicellular, which could be more than 2 billion years ago, it had to deal with preventing or fighting cancer,” Peter said. “So nature must have developed a fail safe mechanism to prevent cancer or fight it the moment it forms. Otherwise, we wouldn’t still be here.”

Thus began his search for natural molecules coded in the genome that kill cancer.

“We knew they would be very hard to find,” Peter said. “The kill mechanism would only be active in a single cell the moment it becomes cancerous. It was a needle in a haystack.”

But he found them by testing a class of small RNAs, called small interfering (si)RNAs, scientists use to suppress gene activity. siRNAs are designed by taking short sequences of the gene to be targeted and converting them into double- stranded RNA. These siRNAs when introduced into cells suppress the expression of the gene they are derived from.

Peter found that a large number of these small RNAs derived from certain genes did not, as expected, only suppress the gene they were designed against. They also killed all cancer cells. His team discovered these special sequences are distributed throughout the human genome, embedded in multiple genes as shown in the study in Cell Cycle.

When converted to siRNAs, these sequences all act as highly trained super assassins. They kill the cells by simultaneously eliminating the genes required for cell survival. By taking out these survivor genes, the assassin molecule activates multiple death cell pathways in parallel.

Activating DISE in organisms with cancer might allow cancer cells to be eliminated. Peter’s group has evidence this form of cell death preferentially affects cancer cells with little effect on normal cells. 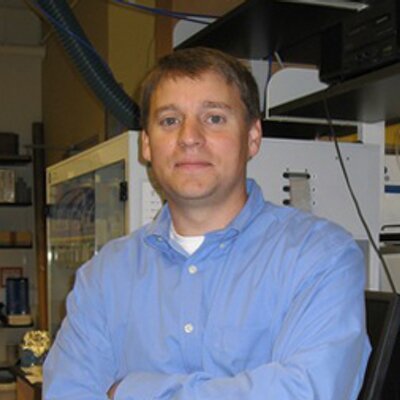 To test this in a treatment situation, Peter collaborated with Dr. Shad Thaxton, associate professor of urology at Feinberg, to deliver the assassin molecules via nanoparticles to mice bearing human ovarian cancer. In the treated mice, the treatment strongly reduced the tumor growth with no toxicity to the mice, reports the study in Oncotarget. Importantly, the tumors did not develop resistance to this form of cancer treatment. Peter and Thaxton are now refining the treatment to increase its efficacy.

Peter has long been frustrated with the lack of progress in solid cancer treatment.

“The problem is cancer cells are so diverse that even though the drugs, designed to target single cancer driving genes, often initially are effective, they eventually stop working and patients succumb to the disease,” Peter said. He thinks a number of cancer cell subsets are never really affected by most targeted anticancer drugs currently used.

Most of the advanced solid cancers such as brain, lung, pancreatic or ovarian cancer have not seen an improvement in survival, Peter said.

“If you had an aggressive, metastasizing form of the disease 50 years ago, you were busted back then and you are still busted today,” he said. “Improvements are often due to better detection methods and not to better treatments.”

Cancer scientists need to listen to nature more, Peter said. Immune therapy has been a success, he noted, because it is aimed at activating an anticancer mechanism that evolution developed. Unfortunately, few cancers respond to immune therapy and only a few patients with these cancers benefit, he said.

“Our research may be tapping into one of nature’s original kill switches, and we hope the impact will affect many cancers,” he said. “Our findings could be disruptive.”

Adapted (with modifications) from Northwestern Now, originally posted on October 19, 2017 by Marla Paul.