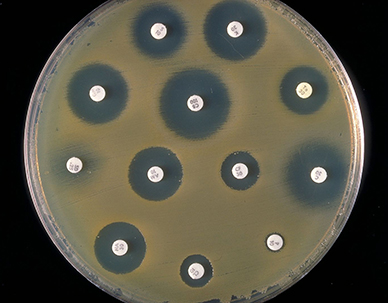 Antibiotic treatments typically kill bacteria or inhibit their growth by interfering with essential metabolic pathways. An alternative approach to fighting certain infections is to target the host cell. Host-targeted approaches may strengthen the host cell’s ability to defend itself against the infectious agent and may perturb particular host functions that are required for bacterial growth. Such host cell-targeted therapeutics could become a method of choice to treat select MDR bacterial infections, or, at the least, to augment treatments based on antibiotics.

Recently, two UChicago scientists, Howard Shuman, PhD, Department of Microbiology, and Sean Crosson, PhD, Department of Biochemistry and Molecular Biology, joined forces, and, with support from the UChicago Institute of Translational Medicine (ITM), formed the Host-Targeted Therapeutics (HTT) collaboration. HTT received further guidance and support from the I-Corps Program run by the Polsky Center for Entrepreneurship and Innovation (an ITM affiliate) and the National Science Foundation.

In July 2015, two postdoctoral fellows working in Crosson’s lab, Daniel Czyż, PhD and Jonathan Willet, PhD, won a CBC Postdoctoral Research Award (PDR) for the project “Host-targeted Therapeutics.” Czyż and Willet are among a total of twenty-two postdoctoral fellows from UChicago, UIC and NU who received PDR awards during the Spring 2015 application round (for a list of awarded projects click here). Czyż and Willet’s project aims to screen and identify small molecules that specifically target host cells, enabling them to resist bacterial infection. As required by the PDR award’s terms, the screen will be conducted at a core facility located at one of the CBC universities, in this case the UChicago Cellular Screening Center. If successful, this high risk/high reward project may lead to identification of molecules that could become invaluable in treating MDR infections worldwide.

The CBC annual symposium, to be hosted at NU downtown campus later this week (October 23rd) is right on target with its current topic “The Unseen Majority: Microbes in Health and Disease.” Shuman is one of the symposium organizers.