Vadim Backman (NU), Lucy Godley (UChicago) and Jack Kaplan (UIC) are co-PIs of a 2015 CBC Lever Award: “Chicago Center for Physical Science-Oncology Innovation and Translation.” Backman is a senior author on a recent article in Proceedings of the National Academy of Sciences, “Superresolution intrinsic fluorescence imaging of chromatin utilizing native, unmodified nucleic acids for contrast,” that acknowledges CBC funding. The paper describes the novel finding of DNA autofluorescence, which may revolutionize cell imaging by making stains (which are toxic) unnecessary.

A Northwestern Engineering team recently caught DNA doing something that has never been seen before: it blinked. 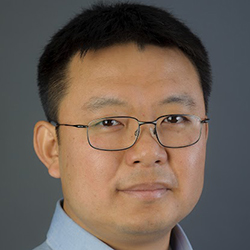 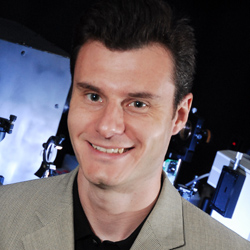 For decades, textbooks have stated that macromolecules within living cells, such as DNA, RNA, and proteins, do not fluoresce on their own. Technology instead relies on special fluorescence dyes to enhance contrast when macromolecules are imaged.

But now Professors Vadim Backman, Hao Zhang, and Cheng Sun have discovered that macromolecule structures in living cells do, in fact, naturally fluoresce. This finding could open the next frontier of biological discovery by paving a new way for label-free, super-resolution nanoscopic imaging and expanding the understanding of biological processes.

This research will be published online during the week of August 15 in the Proceedings of the National Academy of Sciences. Backman and Zhang served as the study’s co-senior authors. Biqin Dong, a postdoctoral fellow in Zhang’s laboratory, and Luay Almassalha, a graduate student in Backman’s laboratory, are co-first authors of the paper.

“There are textbooks that say biological molecules don’t absorb light and don’t fluoresce,” said Zhang, associate professor of biological engineering. “It’s what everyone learns; it’s a part of training, so nobody questions it.”

The reason why no one spotted the fluorescence before? The molecules were in the “dark state,” a condition in which they do not absorb or emit light. But just because they spend so much time in the dark state does not mean they never emit light. Backman likens the situation to athletic interval training. 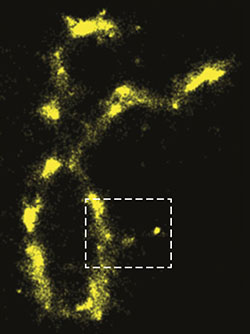 “Sprinters alternate running very, very fast and resting,” Backman explained. “You might catch them when they are resting and assume they aren’t doing anything. That’s what DNA and proteins do. They fluoresce for a very short time and then rest for a very long time.”

Backman, Zhang, and Sun discovered that when illuminated with visible light, the molecules get excited and light up well enough to be imaged without fluorescent stains. When excited with the right wavelength, they even light up better than they would with the best, most powerful fluorescent labels.

“This is ideal because staining is toxic,” Zhang said, “and it makes imaging less precise.”

This toxicity makes it tricky to get an accurate image of the active processes in living cells because they die immediately after the application of fluorescent stains. There are special dyes used to image living cells, but those just cause the cells to die slower.

“The cell might die in two hours, so you can still do imaging in the first half hour,” Backman said. “But what exactly are you measuring? What are you actually seeing? Are you looking at real processes of the cell? Or are you looking at processes in a cell that is about to die? Nobody knows.”

Thanks to Backman, Zhang, and Sun, the world soon might know.