Joseph Bass (NU), Nissim Hay (UIC), Graeme Bell and Louis Philipson (UChicago) are co-PIs on a CBC 2011 Spark Award for project: “Leptin peptide in diabetes: from mechanism to therapeutics.” Bass is a senior author on a recent report published in Cell Metabolism, “Circadian Clock Interaction with HIF1α Mediates Oxygenic Metabolism and Anaerobic Glycolysis in Skeletal Muscle,” that acknowledges CBC funding. The article describes the discovery of circadian clocks in skeletal muscles that regulate the muscle function in response to the light cycle. 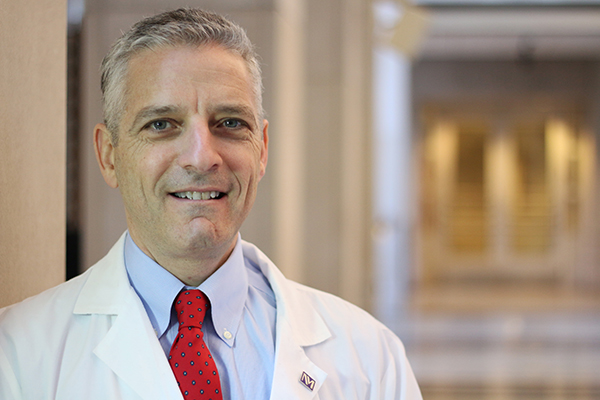 Joseph Bass, MD, PhD, chief and Charles F. Kettering Professor of Endocrinology in the Department of Medicine, was senior author of the study that discovered circadian clocks in muscle tissue that control the muscle’s metabolic response and energy efficiency depending on the time of day.

Northwestern Medicine scientists have discovered circadian clocks in muscle tissue that control the muscle’s metabolic response and energy efficiency depending on the time of day.

The finding in mice, published in Cell Metabolism, sheds light on the time-of-day differences in muscle’s ability to adapt to exercise and use oxygen for energy. Muscle cells are more efficient during an organism’s normal waking hours, the study found.

All cells in the body, including those in muscle, contain a clock that regulates how cells adapt to changes in the environment and activity across the 24-hour day.

“Oxygen and the internal clock are doing a dance together inside muscle cells to produce energy, and the time of day determines how well that dance is synchronized,” said senior author Joseph Bass, MD, PhD, chief and Charles F. Kettering Professor of Endocrinology in the Department of Medicine. “The capacity for a cell to perform its most important functions, to contract, will vary according to the time of day.”

More research is needed before the finding can be translated into workout advice.

“We’re not saying we can tell athletes when they should work out,” said Bass, also the director of the Center for Diabetes and Metabolism. “But in the future, perhaps, you may be able to take advantage of these insights to optimize muscle function.”

Bass is also is a member of the Robert H. Lurie Comprehensive Cancer Center of Northwestern University.

Clara Bien Peek, PhD, the first author and a research assistant professor of Medicine in the Division of Endocrinology, spearheaded the work on muscle and timing.

The research has implications beyond muscle cells because oxygen response is important in all cells. In particular, the deprivation of oxygen is a key factor in heart attacks and in cancer, in which the depletion of oxygen curiously enables cancer cells to grow.

Mice adapted to exercise better at night; humans might during day

In the research, scientists performed studies in mice, which were exercised on a treadmill at different times of day, as well as in isolated muscle fibers in which the circadian clock was genetically mutated.

The scientists analyzed mouse muscle tissues and muscle fibers for expression of genes that are important for exercise. In this way, they determined the impact of deregulation of the circadian clock on muscle fibers in terms of how muscle processes fuel, like sugar and fat, when oxygen levels are low. 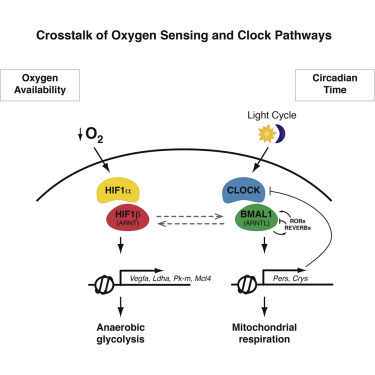 “When we manipulated the clock genetically, we noticed there were profound abnormalities in the muscle,” Bass said. “That set us on a course to understand how the inner muscle clock is important in regulating how well the muscle cell can mobilize energy.”

When mice, which are nocturnal, are exercised during the night, their muscles are better at turning on genes to help them adapt to exercise, scientists found. Since these genes also exist in humans, this suggests humans may also be able to respond better to exercise during the daytime.
The muscle clocks control the metabolic response by interacting with proteins called HIFs that change metabolism when oxygen concentrations get too low in order to allow muscle cells to continue to make energy.

Normally when we rest or do low-level exercise, our muscles consume oxygen to make energy. When we start to sprint or exercise strenuously, we consume oxygen faster and quickly run out. That’s when the dip in oxygen triggers HIFs and signals muscles to switch to sugar for energy—which in turn increases lactic acid.

Turning off the muscle clock prevented the normal capacity of exercise to induce sugar consumption and generation of lactic acid. These findings suggest that better exercise capacity may be tied to specific times of day.

Future may bring new ways to manipulate oxygen in muscles

“In the future, we may discover new ways to manipulate the oxygen response of the cell by resetting the clock,” Bass said. He noted drugs are available that can manipulate the internal clock in cells.

“If we can optimize muscle function,” he said, “It’s also a critical step in understanding how to impact glucose metabolism in diabetes.”

Diabetes is characterized by a failure of muscle to consume glucose, which in turn controls blood sugar levels. Strengthening the muscle clock may provide a new way to eliminate excess glucose and treat diabetes.

The scientists tested their theories about the internal clock in muscle cells because those cells are particularly dependent on oxygen for contraction and metabolism.

“We wanted to determine the rules that interconnect clocks with the physiological use of oxygen,” Bass said. “We believe that studying muscle can provide us with the rules of how clocks govern response to oxygen, and we would like to test these principles in a variety of conditions.”