Congratulations to a CBC Scholar Nicolás Peláez, who is the first author of the study, titled "Dynamics and heterogeneity of a fate determinant during transition towards cell differentiation" which was recently published in the journal eLIFE. Nicolás is a Ph.D. candidate in interdisciplinary biological sciences working with Professors Amaral and Carthew at Northwestern.

EVANSTON, Ill. — Cancer cells are normal cells that go awry by making bad developmental decisions during their lives. In a study involving the fruit fly equivalent of an oncogene implicated in many human leukemias, Northwestern University researchers have gained insight into how developing cells normally switch to a restricted, or specialized, state and how that process might go wrong in cancer.

The fruit fly’s eye is an intricate pattern of many different specialized cells, such as light-sensing neurons and cone cells (see image below). Because flies share with humans many of the same cancer-causing genes, scientists use the precisely made compound eye of Drosophila melanogaster (the common fruit fly) as a workhorse to study what goes wrong in human cancer. 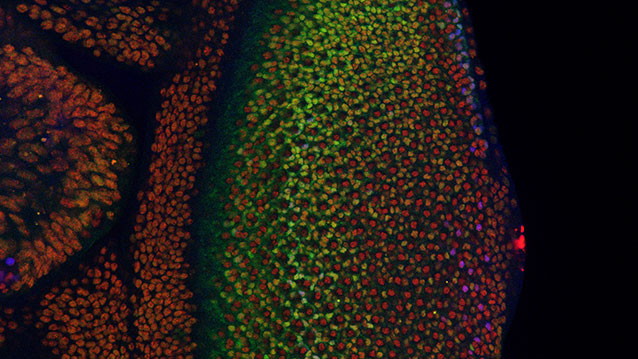 A multidisciplinary team co-led by biologist Richard W. Carthew and engineer Luís A.N. Amaral studied normal cell behavior in the developing eye. The researchers were surprised to discover that the levels of an important protein called Yan start fluctuating wildly when the cell is switching from a more primitive, stem-like state to a more specialized state. If the levels don’t or can’t fluctuate, the cell doesn’t switch and move forward.

“This mad fluctuation, or noise, happens at the time of cell transition,” said Carthew, professor of molecular biosciences in Northwestern’s Weinberg College of Arts and Sciences. “For the first time, we see there is a brief time period as the developing cell goes from point A to point B. The noise is a state of ‘in between’ and is important for cells to switch to a more specialized state. This limbo might be where normal cells take a cancerous path.”

The researchers also found that a molecular signal received by a cell receptor called EGFR is important for turning the noise off. If that signal is not received, the cell remains in an uncontrolled state.

By pinpointing this noise and its “off” switch as important points in the normal process of cell differentiation, the Northwestern researchers provide targets for scientists studying how cells can go out of control and transform into cancer cells.

The study was published as the cover story Jan. 14 by the online life sciences and biomedicine journal eLife.

The “noisy” protein the Northwestern researchers studied is called Yan in the fly and Tel-1 in humans. (The protein is a transcription factor.) The Tel-1 protein instructs cells to turn into white blood cells; the gene that produces the protein, oncogene Tel-1, is frequently mutated in leukemia.

The EGFR protein that turns off the noise in flies is called Her-2 in humans. Her-2 is an oncogene that plays an important role in human breast cancer.

“On the surface, flies and humans are very different, but we share a remarkable amount of infrastructure,” said Carthew, a member of the Robert H. Lurie Comprehensive Cancer Center of Northwestern University. “We can use fruit fly genetics to understand how humans work and how things go wrong in cancer and other diseases.”

Fruit fly cells are small and closely packed together, making study of them challenging. Carthew and Amaral’s team of biologists, chemical and biological engineers, computer scientists and chemists together figured out how to identify and analyze thousands and thousands of individual cells in the flies’ eyes.

“In the past, people have built models of regulatory networks that control cell differentiation mostly by genetically perturbing one or two components of the network at a time and then compiling those results into models,” said Amaral, professor of chemical and biological engineering at the McCormick School of Engineering. “We instead measured the retina as it developed and found the unexpected behavior of the key regulatory factors Yan and EGFR.”

Nicolás Peláez, first author of the study and a Ph.D. candidate in interdisciplinary biological sciences working with Amaral and Carthew, built new tools to study this strange feature of noise in developing flies. His methods enabled the researchers to easily measure both the concentration of the Yan protein and its fluctuation (noise).

It takes 15 to 20 hours for a fruit fly cell to go from being an unrestricted cell to a restricted cell, Carthew said. Peláez determined the Yan protein is noisy, or fluctuating, for six to eight of those hours.

NP was funded by the Chicago Biomedical Consortium, the Robert Lurie Comprehensive Cancer Center, and an International Student Research Fellowship from the Howard Hughes Medical Institute. This work was supported by the Department of Energy grant DE-NA0002520 (AKK), and the National Institutes of Health grants P50GM081892 (IR, AD, LANA, RWC), R01GM80372 (IR), and R01GM077581 (RWC).

In addition to Carthew, Amaral and Peláez, other authors are Bao Wang and Aggelos K. Katsaggelos, of Northwestern; Arnau Gavalda-Miralles and Heliodoro Tejedor Navarro, of the Howard Hughes Medical Institute; and Herman Gudjonson, Ilaria Rebay and Aaron R. Dinner, of the University of Chicago.

Image: The fruit fly’s eye is an intricate pattern of many different specialized cells, and scientists use it as a workhorse to study what goes wrong in human cancer. In a new study of the fly’s eye, Northwestern University researchers have gained insight into how developing cells normally switch to a restricted, or specialized, state and how that process might go wrong in cancer. (Credit: Northwestern University)