“Protein Folding and Misfolding in Health and Disease” 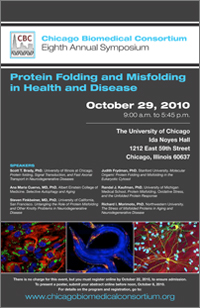 The 8th Annual CBC Symposium took place on October 29, 2010 within the beautiful surroundings of Ida Noyes Hall at the University of Chicago campus. This year’s symposium focused on "Protein Folding and Misfolding in Health and Disease" and aimed to address both the basic biology of protein folding in cells, and perturbations of the process, or protein misfolding, and the role that misfolding plays in aging and the development of neurodegenerative disorders (such as Huntington’s, Parkinson’s and Alzheimer’s diseases, and Amyotrophic Lateral Sclerosis).

As one of the symposium attendees put it, this year’s symposium featured “a stellar line-up and important topics.”  Indeed, the lectures were presented by four outstanding guest speakers:

and two Chicago-area based scientists:

The meeting opened with introductory remarks by Sangram (Sam) S. Sisodia, PhD, Thomas Reynolds Sr. Family Professor of Neurosciences, and Director of the Center for Molecular Neurobiology, University of Chicago.

Over 200 scientists actively participated in this year’s symposium. All three CBC universities were well-represented among the symposium attendees, who also included scientists from Rosalind Franklin University, Toyota Technological Institute at Chicago, Chicago State University, Illinois Institute of Technology, Rush University Medical Center, University of Massachusetts Medical School, among others. In addition, the symposium presented a popular poster session that this year gathered a record number of posters (28) in the history of the CBC annual symposia.