Three CBC Awardees, Karla Satchell, David Gius and Marco Biancucci, NU, contribute to the development of a novel technology with therapeutic potential that could significantly slow down RAS-dependent tumor growth 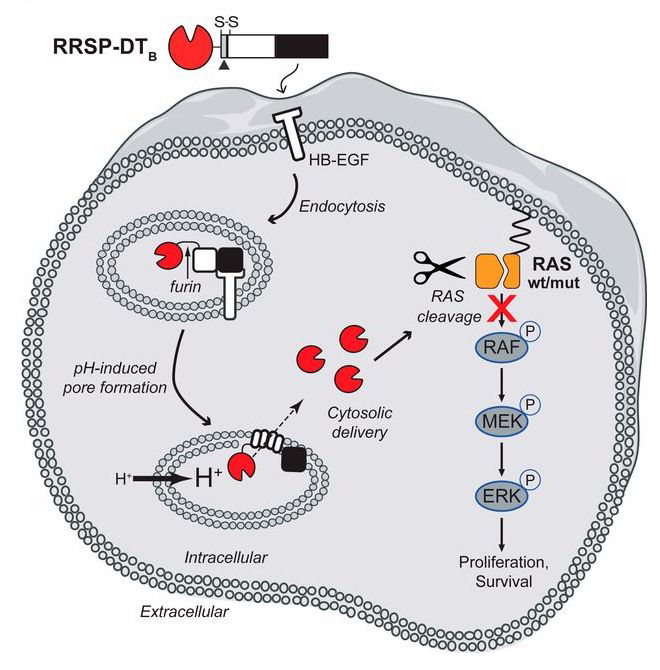 Schematic diagram illustrating transport and intracellular trafficking of RAS/RAP1 specific endopeptidase (RRSP) fused to the translocation T and receptor R binding domains of diphtheria toxin fragment B (DTB) via a receptor-mediated endocytic mechanism. Once in the cytosol, RRSP cleaves RAS resulting in down-regulation of the MAPK/ERK-signaling cascade. (Courtesy of PNAS.)

RAS – an oncoprotein that is involved in the development of many cancer types – has been a drug target in cancer research for many years without much luck, partially due to the absence of accessible inhibitor-binding sites on the molecule. Here, the authors describe an ingenious method of targeted delivery of an engineered chimeric toxin to the cells expressing a chimera-specific receptor. Once in the cells, the chimera, which is a fusion with a RAS protease, cleaves, and hence inactivates RAS, (see the graphic abstract). The approach has been shown to significantly slow down tumor growth in animal models of human breast cancer. The chimeric toxin appears to be a promising anti-cancer therapeutic agent to be further studied and developed.

Karla Satchell, PhD, professor of Microbiology-Immunology and member of the Robert H. Lurie Comprehensive Cancer Center of Northwestern University, is senior author of the PNAS study. One of the co-authors on the publications, Marco Biancucci, PhD, who is a postdoctoral fellow in the Satchell lab received in 2015 a CBC Postdoctoral Research Award for the project: “Identifying Inhibitors of Novel Ras Bacterial Protease by High Throughput Screening.” In 2019, Satchell’s project on “RAS Processing as a Strategy to Reduce RAS-Driven Tumors,” has been granted a CBC Accelerator Award in support of further development of the novel class of RAS inhibitors.

David Gius, MD, PhD, who is professor of Radiation Oncology and Pharmacology at NU’s Feinberg School of Medicine, is also a co-auhtor on the study and a CBC Awardee. A CBC Catalyst Award that Gius received in 2015 for the project “Fluorescent Probes for Live-cell Imaging of Sirtuin Activity: Application to Breast Cancer” partially funded the current publication.

Enjoy a feature article about the PNAS research paper written for the NU Medicine News by Will Doss (reposted below). 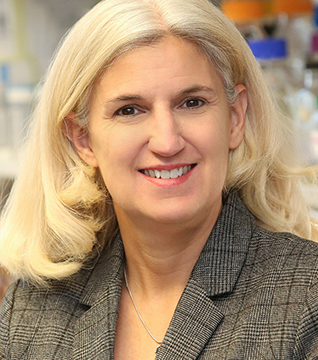 Karla Satchell, PhD, professor of Microbiology-Immunology and member of the Robert H. Lurie Comprehensive Cancer Center of Northwestern University, was senior author of the study published in Proceedings of the National Academy of the Sciences. (Courtesy of the NU Medicine News Center.)

A chimeric toxin slowed tumor growth in mouse models of human breast and colon cancer, according to a Northwestern Medicine study published in Proceedings of the National Academy of the Sciences (PNAS).

The novel compound uses the targeting machinery from diphtheria toxin grafted to a protease that inhibits RAS, a signaling pathway implicated in as many as 50 percent of cancers. While this proof-of-concept might target all human cells, investigators are now modifying the diphtheria machinery to specifically target cancer cells in the hopes of creating an effective therapeutic, according to Karla Satchell, PhD, professor of Microbiology-Immunology and co-senior author of the study.

“We showed that this toxin reduced tumorigenesis and in some cases even shrank tumors,” said Satchell, who is a member of the Robert H. Lurie Comprehensive Cancer Center of Northwestern University. “If we can target this specifically to cancer cells, taking out RAS might take out the cancer.”

Many toxins can be classified as “AB” toxins, made up of an “activity” subunit, which attacks targets and a “binding” subunit, which seeks out and binds to targets. Scientists realized the therapeutic potential of these toxins more than 30 years ago, and replaced the binding subunit of diphtheria toxin with immune antibodies in a bid to fight cancer.

While these compounds did indeed home in on and attack cancer cells, the inefficient targeting meant healthy cells were also attacked, leading to significant negative side effects that limited their use. Attempts to instead attach new activity subunits to the diphtheria binding subunit failed, and scientists turned their eyes towards other possible treatments.

However, recent studies authored by Roman Melnyk, PhD, senior scientist in the Department of Molecular Medicine at the Hospital for Sick Children (SickKids) in Toronto, have shown the binding subunit is in fact malleable, and may offer a new scientific avenue. Melnyk is also co-senior author of the current study.

“For 30 years, nobody worked on it, and it turns out these old papers were wrong,” Satchell said. “Now, our idea is to flip it around. Instead of using highly toxic diphtheria, let’s swap it for something cancer-specific.”

That ‘“something”’ turned out to be a peptide inhibitor that cleaves RAS, a signaling pathway that when mutated helps cancer cells proliferate. To test the RAS inhibitor’s effectiveness, Satchell, Melnyk and colleagues grafted human breast and colon cancer cells onto mice and administered the chimeric toxin.

Because mice don’t respond to diphtheria toxin, the chimeric toxin trafficked directly to the human cancer cells and slowed tumor growth, demonstrating the effectiveness of the RAS inhibitor.

Now, Satchell and her collaborators are working to modify the binding subunit to only recognize unique receptors found in cancer cells, such as EGFR, which is found in skin cancers.

“There’s a huge amount of research on this,” Satchell said. “There’s no shortage of targets, because drug developers are always trying to target their drugs as specifically as possible.”

If the binding subunit can be modified to traffic only to cancer cells, this chimeric toxin could be a seek and destroy weapon against cancer, Satchell said.

“Now we know it works, it’s well worth our while to go figure out a targeting strategy,” Satchell said.

Adapted (with modifications) from NU Medicine News Center, by Will Doss, published on July 6, 2020.