Mechanics of a molecular logic OR 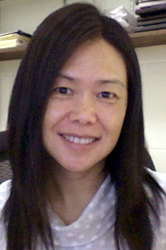 Sensory proteins, which are capable of detecting more than one stimulatory signal, e.g., a chemical and a physical one, have to be equipped with a “sorting hat-like” internal mechanism that allows them to produce a timely, specific and precise biological response to a variety of environmental scenarios when one, both or none of the signals are present. That internal mechanism is known as a molecular logic gate and comes in several flavors. An “AND” gate requires two simultaneous input signals to elicit a response. Conversely, a “NOR” gate produces a response in the absence of both stimuli. Finally, an “OR” gate is more permissive and produces a response when either or both signals are present. Obviously, this is an oversimplification of the molecular sensors in real life as they need to take into account not only the quality but also quantity of the signals, cumulative or inhibitory modulatory effects of different signal interactions with the sensor, etc.

Senior author on the publication Xiaojing Yang, Assistant Professor at the Department of Chemistry at UIC, is a recipient of a CBC Catalyst Award in 2018. The CBC funding is acknowledged as having supported the research results published in the PNAS paper.

The CBC congratulates Yang and her co-workers for taking on this ambitious task of resolving complex inner workings of a protein at a single molecule level.

Signal detection and integration by sensory proteins constitute the critical molecular events as living organisms respond to changes in a complex environment. Many sensory proteins adopt a modular architecture that integrates the perception of distinct chemical or physical signals and the generation of a biological response in the same protein molecule. Currently, how signal perception and integration are achieved in such a modular, often dimeric, framework remains elusive. Here, we report a dynamic crystallography study on the tandem sensor domains of a dual-sensor histidine kinase PPHK (phosphorylation-responsive photosensitive histidine kinase) that operates a molecular logic OR, by which the output kinase activity is modulated by a phosphorylation signal and a light signal. A joint analysis of ∼170 crystallographic datasets probing different signaling states shows remarkable dimer asymmetry as PPHK responds to the input signals and transitions from one state to the other. Supported by mutational data and structural analysis, these direct observations reveal the working mechanics of the molecular logic OR in PPHK, where the light-induced bending of a long signaling helix at the dimer interface is counteracted by the ligand-induced structural changes from a different sensor domain. We propose that the logic OR of PPHK, together with an upstream photoreceptor, implements a “long-pass” red light response distinct from those accomplished by classical phytochromes.

We thank Prof. D. Bryant (The Pennsylvania State University) for providing the genomic DNA of Leptolyngbya sp. strain JSC-1. We thank the Life Science Consortium Access Team (LS-CAT) staff for support in X-ray data collection. Use of LS-CAT Sector 21 is supported by the Michigan Economic Development Corporation and the Michigan Technology Tri-Corridor under Grant 085P1000817. Use of the Advanced Photon Source is supported by the US Department of Energy, Office of Science, Office of Basic Energy Sciences, under Contract DE-AC02-06CH11357. This work was supported by grants from the NIH (Grant R01EY024363 to X.Y.), Chicago Biomedical Consortium (Grant CBC C-086 to X.Y.) and the University of Illinois at Chicago (to X.Y.).