Determining a correct charge of an ion is sometimes troublesome when the ion is unstable and disintegrates during the time of the analysis or produces too low signal to unambiguously quantify it using charge detection mass spectrometry (CDMS). In a recent paper published in the Journal of American Society of Mass Spectrometry, “STORI Plots Enable Accurate Tracking of Individual Ion Signals,” the authors describe a new method that allows for more accurate ionic charge analysis, called the Selective Temporal Overview of Resonant Ions (STORI) plots.

The CBC congratulates all authors involved in the current study, including Neil Kelleher, NU, who is one of the contributors.

Kelleher is the Walter and Mary Elizabeth Glass Professor of Chemistry, Molecular Biosciences, and Medicine at NU. He is recognized as a CBC Senior Investigator due to his recruitment to NU in 2010 with help from the CBC Recruitment Resources Funds Award. Kelleher is also director of Northwestern Proteomics, an NU-based facility that has evolved from the Proteomics Center of Excellence (PCE), which was originally established with the CBC support. Kelleher’s additional CBC awards and community contributions are listed below the article. The CBC is proud to have played a role in Kelleher’s recruitment and to have helped support his research over the years. 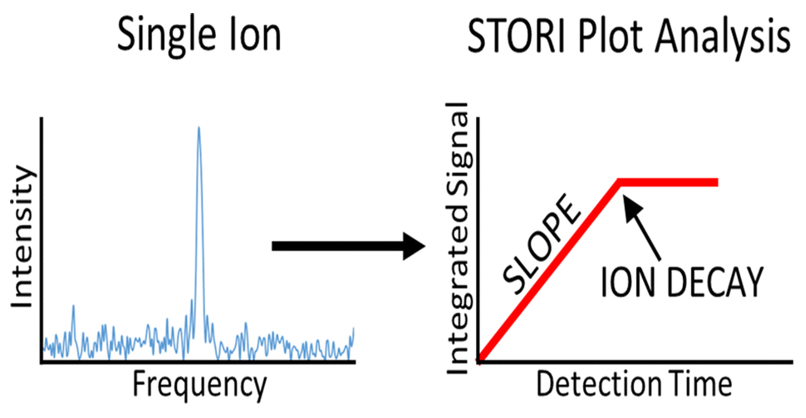 Charge detection mass spectrometry (CDMS) of low-level signals is currently limited to the analysis of individual ions that generate a persistent signal during the entire observation period. Ions that disintegrate during the observation period produce reduced frequency domain signal amplitudes, which lead to an underestimation of the ion charge state, and thus the ion mass. The charge assignment can only be corrected through an accurate determination of the time of ion disintegration. The traditional mechanisms for temporal signal analysis have severe limitations for temporal resolution, spectral resolution, and signal-to-noise ratios. Selective Temporal Overview of Resonant Ions (STORI) plots provide a new framework to accurately analyze low-level time domain signals of individual ions. STORI plots allow for complete correction of intermittent signals, the differentiation of single and multiple ions at the same frequency, and the association of signals that spontaneously change frequency.

October 7, 2019
▸ Of cocaine and estrogen
Or, why women are more susceptible than men to develop cocaine addiction — two CBC community members Neil Kelleher and Paul Thomas, NU, help to elucidate in a recent Journal of Proteome Research publication