On leanness and obesity-promoting microbiota, and on positive feedback loops — Eugene Chang, UChicago researcher and CBC past awardee

In a recent paper published in Cell Host & Microbe by the Chang group, UChicago, the authors describe how in mice, the small intestine microbiota may influence and even regulate fat digestion and absorption. The paper discusses an observation that, when exposed to high-calorie diet, certain gut bacteria species multiply to facilitate fat absorption. Conversely, presence of two other bacteria species appears to correlate with a lean phenotype. These findings could pave a path to further studies to better understand and treat two diet-related extremes that affect humans: malabsorption and obesity. Senior author, on the publication, Eugene Chang, and one of co-authors, Catherine Reardon, both from UChicago, are past CBC awardees. Reardon was awarded in 2013 to organize a CBC Exploratory Workshop, dedicated to the topic of lipoproteins. In 2015, Chang received a CBC Catalyst Award for the project: “Role of Gut Microbiota in Determining Drug Efficacy and Toxicity.” Congratulations to all researchers involved in the study!

Specific bacteria in the small intestine are crucial for fat absorption 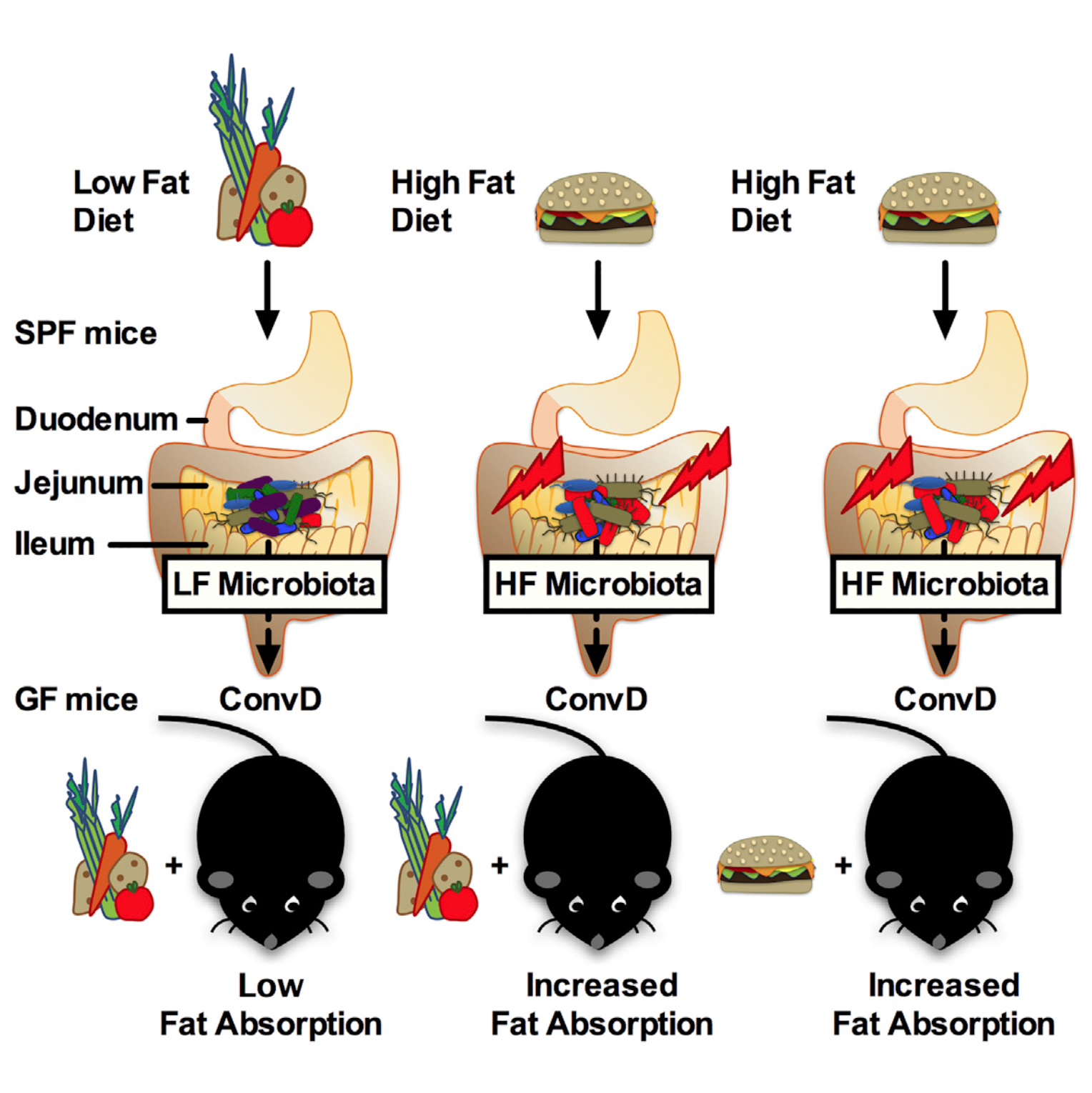 Although the vast majority of research on the gut microbiome has focused on bacteria in the large intestine, a new study — one of a few to concentrate on microbes in the upper gastrointestinal tract — shows how the typical calorie-dense western diet can induce expansion of microbes that promote the digestion and absorption of high-fat foods.

Several studies have shown that these bacteria can multiply within 24 to 48 hours in the small bowel in response to consumption of high-fat foods. The findings from this work suggest that these microbes facilitate production and secretion of digestive enzymes into the small bowel.

Those digestive enzymes break down dietary fat, enabling the rapid absorption of calorie-dense foods. Concurrently, the microbes release bioactive compounds. These compounds stimulate the absorptive cells in the intestine to package and transport fat for absorption. Over time, the steady presence of these microbes can lead to over-nutrition and obesity.

“These bacteria are part of an orchestrated series of events that make lipid absorption more efficient,” said the study’s senior author, Eugene B. Chang, MD, the Martin Boyer Professor of Medicine and director of the NIH Digestive Diseases Research Core Center at the University of Chicago Medicine. “Few people have focused on the microbiome of the small intestine, but this is where most vitamins and other micronutrients are digested and absorbed.” 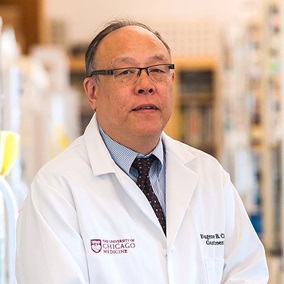 “Our study is one of the first to show that specific small-bowel microbes directly regulate both digestion and absorption of lipids,” he added. “This could have significant clinical applications, especially for the prevention and treatment of obesity and cardiovascular disease.”

The goals of the study, published April 11, 2018 in the journal Cell Host and Microbe, were to find out if microbes were required for digestion and absorption of fats, to begin to learn which microbes were involved, and to assess the role of diet-induced microbes on the digestion and uptake of fats.

The study involved mice that were germ-free, bred in isolated chambers and harboring no intestinal bacteria, and mice that were “specific pathogen free (SPF),” meaning healthy but harboring common non-disease causing microbes.

The germ-free mice, even when fed a high-fat diet, were unable to digest or absorb fatty foods. They did not gain weight. Instead, they had elevated lipid levels in their stool.

SPF mice that received a high-fat diet did gain weight. This diet quickly boosted the abundance of certain microbes in the small intestine, including microbes from the Clostridiaceae and Peptostreptococcaceae families. A member of Clostridiaceae was found to specifically impact fat absorption. The abundance of other bacterial families decreased on a high-fat diet including Bifidobacteriacaea and Bacteriodacaea, which are commonly associated with leanness.

When germ-free mice were subsequently introduced to microbes that contribute to fat digestion, they quickly gained the ability to absorb lipids.

“Our study found that, at least in mice, a high-fat diet can profoundly alter the microbial make-up of the small intestine,” Chang said. “Certain dietary pressures, such as calorie-dense foods, attract specific bacterial strains into the small intestine. These microbes are then able to allow the host to digest this high-fat diet and absorb fats. That can even impact extra-intestinal organs such as the pancreas.”

“I would say the most important takeaway overall is the concept that what we eat—our diet on a daily basis—has a profound impact on the abundance and the type of bacteria we harbor in our gut,” said Kristina Martinez-Guryn, PhD, lead author of the study, and now an assistant professor at Midwestern University in Downers Grove, IL. “These microbes directly influence our metabolism and our propensity to gain weight on certain diets.”

Although this study was very preliminary, she added, “our results suggest that maybe we could use pre- or probiotics or even develop post-biotics (bacterial-derived compounds or metabolites) to enhance nutrient uptake for people with malabsorption disorders, such as Crohn’s disease, or we could test novel ways to decrease obesity.”

Adapted (with modifications) from UChicago Medicine, The Forefront, by John Easton, published on April 11, 2018.