A CBC Lever Award 2008 co-recipient, Robert Grossman of UChicago, will play a major role in establishment of the new NIH-sponsored initiative, called the Gabriella Miller Kids First pediatric data resource center. The 2008 Lever contributed to the establishment of the Genomic Data Commons (GDC), an initiative of the National Cancer Institute (NCI), which was launched at the University of Chicago in June 2016. On the Kids First project, Grossman will work closely with Samuel Volchenboum, an expert in pediatric cancers and director of the Center for Research Informatics at UChicago. 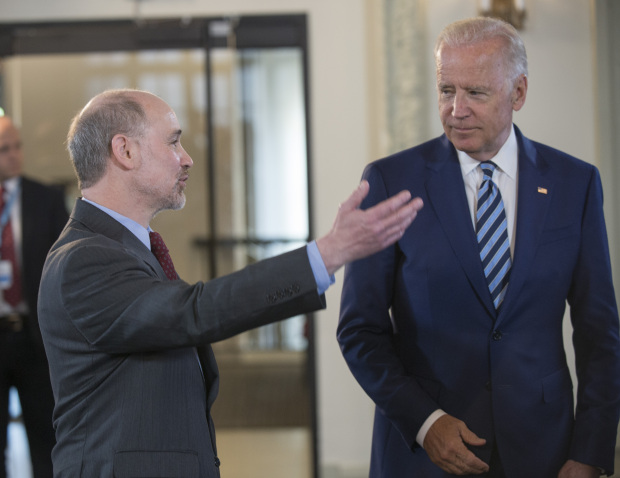 Robert Grossman, PhD, the Frederick H. Rawson Professor in Medicine and Computer Science and director of the Center for Data Intensive Science at the University of Chicago, gives Vice President Joe Biden a tour of the NCI’s Genomic Data Commons

Investigators from the University of Chicago Medicine will play a central role in a five-year, $14.8 million effort by the National Institutes of Health, contingent upon available funding, to improve the understanding of inherited diseases.

The project, known as the Gabriella Miller Kids First pediatric data resource center, will be a multi-centered effort led by investigators at the Center for Data Driven Discovery in Biomedicine at the Children’s Hospital of Philadelphia (CHOP).

Two crucial components of the Kids First project, however, are the teams led by Robert L. Grossman, PhD, and Sam Volchenboum, MD, PhD, at the University of Chicago. Grossman and Volchenboum will play a central role in the technical underpinnings of the large-scale processing and sharing of genomic and clinical data for this important initiative.

Grossman, the Frederick H. Rawson Professor in Medicine and Computer Science and director of the Center for Data Intensive Science at the University of Chicago, heads up an operations center that runs numerous data commons, supporting more than 20,000 researchers across the world every month.

“Platforms that enable researchers to analyze securely large amounts of de-identified clinical and genomic data are one of our most powerful tools for making discoveries that improve children’s lives,” Grossman said.

Grossman’s team is known for its work on the NCI’s Genomic Data Commons (GDC), a federally funded, unified data system that promotes sharing of cancer genomic and clinical data between researchers. The GDC is a core component of the National Institutes of Health’s Precision Medicine Initiative.

Grossman will work closely with Volchenboum, an expert in pediatric cancers and director of the Center for Research Informatics at UChicago. Volchenboum’s team developed the world’s first international pediatric cancer data commons, housing data on more than 19,000 neuroblastoma patients from around the world.

Under their leadership, the Chicago team of engineers and scientists will design and operate the cloud-based, open-source software needed to establish the data coordination center within the Kids First data resource center.

“This is a critical step forward for the pediatric oncology community,” Volchenboum said. “The Kids First data resource center will provide a much-needed resource for pediatric researchers to leverage a large set of genomic and clinical data on children. These data will help us understand why some children develop cancer and how to best stratify and treat their disease.”

The Kids First data resource center is a centralized platform of well-curated clinical and genetic sequence data from dozens of childhood cancer and structural birth defect cohorts, comprising genetic data from thousands of patients and their families. The team will integrate large, disparate data sources, provide support for analyses, and coordinate with third-party data commons and applications.

Researchers can use this resource to probe genetic pathways and explore genetic abnormalities that underlie childhood cancer and structural birth defects. The program will also provide funds to generate new data and facilitate deposition into a centralized database.

It is important to study these conditions together because children with birth defects are at a higher risk of also developing childhood cancer, suggesting they may share an underlying cause. However, not much is known about these suspected pathways. Few large-scale genetics studies have focused on both childhood cancer and structural birth defects. These shared biological pathways may not be detected if researchers study cancer patients or those with structural birth defects independently.

While there is already a healthy web-based research ecosystem for cancer genomics data, “there is no comprehensive portal for pediatric cancers, which are distinct in etiology and genomic profile from adult cancers,” according to background information from the NIH. “There are scant web- or application-based tools to assist researchers investigating the causes and consequences of structural birth defects (or germline diseases in general), and no online resources whatsoever that combine the phenotypic and genotypic information for these two classes of pediatric disease.”

The Kids First data resource center is designed to bring together the pediatric cancer and structural birth defect research communities, providing a unique opportunity to leverage the information gathered by one group to acquire insights in the other, and to recognize and promote collaborations among the two disciplines.

This data resource portal will serve the needs of four groups of users:

The portal will bring together this heterogeneous user base to participate in a fertile ecosystem for research, study and collaboration built on top of an unprecedented collection of genetic and phenotypic data from pediatric patients.

Source: Adapted (with modifications) from the UChicago Science Life. August 15, 2017 by John Easton in Features.