The December 2017 issue of Northwestern Medicine Magazine features an article devoted to skin research conducted at NU. Remarkably, several NU scientists who are highlighted in the story have received CBC support in the past: Kathleen Green, Amy Paller and her postdoc, Duncan Dam, Jaehyuk Choi, Chad Mirkin and Bethany Perez White are included in this august group (for details see the notes below the article). Their research spans areas from studying properties of healthy skin to mechanisms underlying the development of severe skin maladies such as melanoma to developing skin permeable therapeutics using nanotechnology. As Jaehyuk Choi, a CBC Catalyst Award (2017) recipient states in the article, “We pride ourselves as a department that has a robust bedside-to-bench-to-bedside pipeline.” CBC congratulates each and every scientist mentioned in the article for their dedication and contributions to basic and translational science.

Getting Under the Skin

Emphasis on translation is driving discoveries in dermatology. 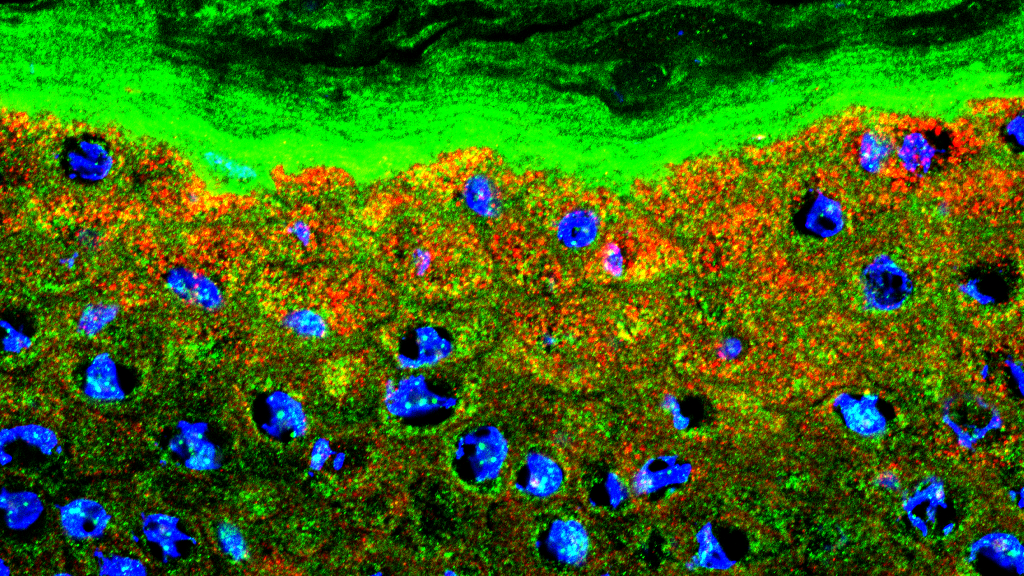 The body’s largest organ, the skin plays an essential role in maintaining health. It acts as both a protective barrier and a sensor linking the body to the outside world. Yet many unanswered questions remain about how genetic mutations, diseases or even common treatments can harm the skin.

“Skin is the first barrier and line of defense against many environmental stressors, including ultraviolet — UV — radiation, mechanical stress and infectious agents,” explains Kathleen Green, PhD, the Joseph L. Mayberry, Sr., Professor of Pathology and Toxicology, and a professor of Dermatology.

Faculty members in Northwestern’s Department of Dermatology are working hard to better understand the fundamentals of skin biology and to bring those discoveries to the forefront of skin treatment. Their research extends from deciphering the genetic and molecular basis of deadly skin cancers, to trying to avoid harmful side effects of treatments like glucocorticoids, to preventing disease-related complications like neuropathy.

Department Chair Amy Paller, MD, ’81 MSc, ’83 GME, explains that she and her colleagues have been shifting increasingly toward more translational work. This includes leveraging genetic and molecular discoveries to develop new treatments or repurpose old ones.

“We’ve gone from a department where scientists in the lab are making important discoveries in basic biology to one in which our scientists are using human tissues and applying their discoveries to disease,” says Paller, also the Walter J. Hamlin Professor of Dermatology. 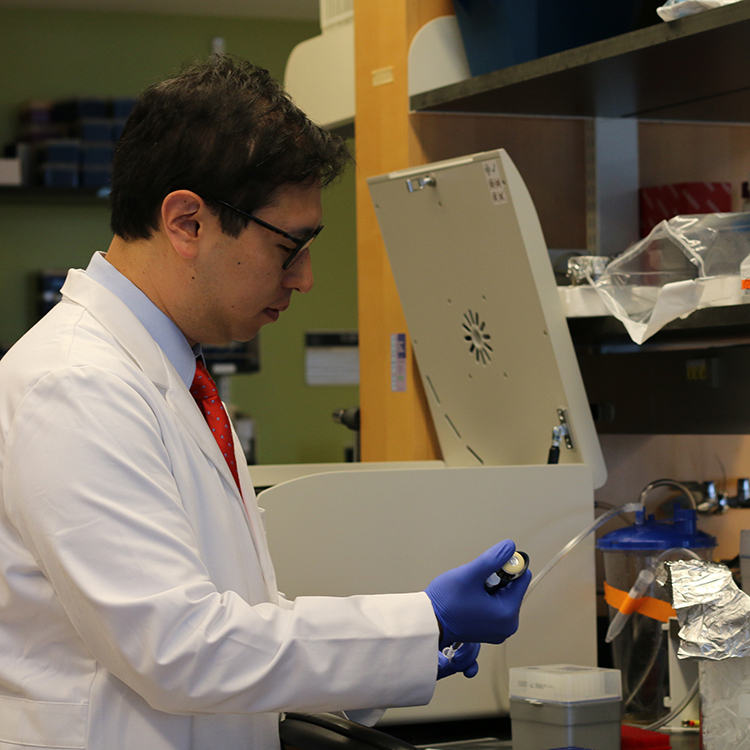 Seeing patients with cutaneous T-cell lymphoma (CTCL) suffer from symptoms, including intractable itching, motivated Jaehyuk Choi, MD, PhD, to make the disease his research focus. A type of cancer involving the immune system, cutaneous T-cell lymphoma first manifests in the skin. To improve care for his patients, he’s turned to genomic techniques to identify mutations that lead to the disease.

“Cancer is fundamentally a genetic disease,” says Choi, the Ruth K. Freinkel, MD, Research Professor and an assistant professor of Dermatology and of Biochemistry and Molecular Genetics. Mutations in DNA set cancer in motion and cause a host of metabolic, immunologic and transcriptomic changes in a cell. Choi’s studies have begun to yield a high-resolution map of all the mutations that occur in patients with CTCL.

Currently, many patients with the disease go undiagnosed for years, in part because physicians don’t have specific tests to identify it. Choi hopes his studies will lead to more personalized care based on finding specific mutations that characterize an individual’s lymphoma.

Green is also leveraging molecular techniques to identify cancer’s calling cards, but rather than start from a clinical perspective she’s starting with fundamental basic biology. She studies structural molecules called desmosomes in the skin that emerged when vertebrates evolved from their more primitive ancestors.

“Textbooks describe desmosomes as structures that physically hold cells together, allowing tissues to resist mechanical stress,” she explains. This function is particularly important for holding together epithelial cells, called keratinocytes, that make up the outer layer of the skin, the epidermis. In addition to structural roles, Green’s research has shown that some desmosomal protein components may also be involved in regulating the immune response. One such protein called desmoglein 1 (DSG1) helps the outer layer of the skin recover from UV radiation damage.

Green is collaborating with Pedram Gerami, MD, who directs the dermatology department’s melanoma program and Northwestern Medicine’s Skin Cancer Institute, to study molecular changes in the keratinocytes that surround abnormal moles and very early stage melanomas. So far, their studies have shown that DSG1 lacks a nest of epithelial cells that surround the pigment-producing melanocytes or melanoma cells. Now they’re trying to figure out how these desmoglein-deficient cell neighbors might promote the conversion of moles to melanoma and to create a biomarker panel to test for such cellular changes to predict progression to melanoma.

While the work is currently in the very early stages, Green hopes it might one day lead to ways to prevent melanoma.

“There could be something topical people could put on moles to prevent transformation into melanoma,” she says. “That is the ultimate goal. 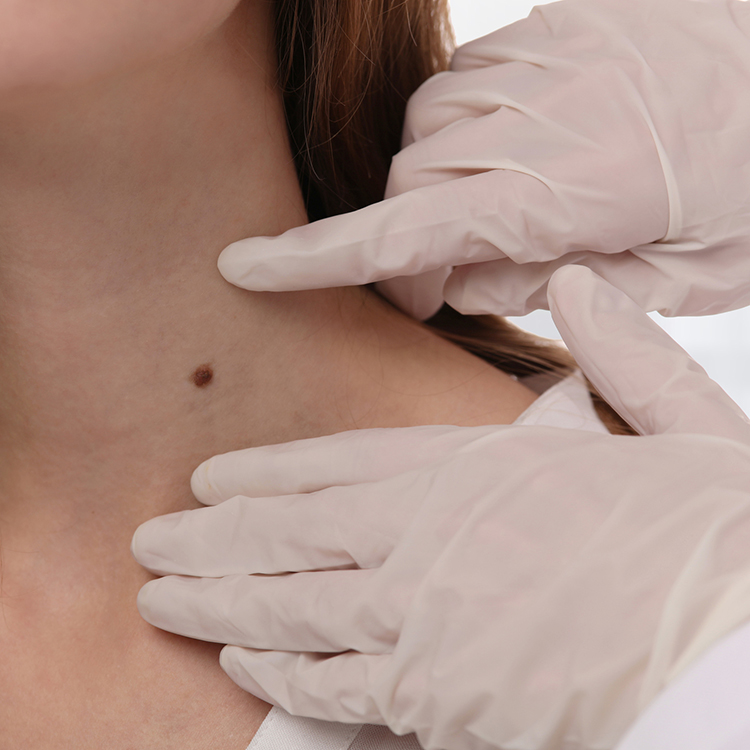 Budunova is working to find safer alternatives to drugs targeting the glucocorticoid receptor. Over time, glucocorticoids cause skin thinning and weakening, and prevent wound healing, among other adverse effects.

Few embody the department’s shift to translational science better than Irina Budunova, MD, PhD, associate professor of Dermatology and Urology. She’s spent more than a decade exploring the glucocorticoid receptor in cancer. But five years ago she began to focus more exclusively on dermatology. Now, she’s using her insights to try to find safer alternatives to drugs targeting the glucocorticoid receptor, a ubiquitous protein that binds to cortisol and other steroid hormones.

Glucocorticoids have been a mainstay of treatment for many systemic diseases and skin conditions for more than 50 years. Despite their effectiveness at treating inflammation and some cancers, these drugs can have serious adverse effects on the skin and many other tissues. Over time, they cause skin thinning and weakening, and prevent wound healing. They also cause a myriad of systemic adverse effects, including muscle wasting, metabolic disturbances and osteoporosis, Budunova notes.

“If glucocorticoids were proposed now, they would never be approved by the FDA because the side effects are too great,” she says.

The reason for these side effects is that the glucocorticoid receptor is a major regulator of metabolism. Glucocorticoids can degrade proteins and lipids necessary for the synthesis of glucose in the liver to maintain blood glucose levels. Cells also try to compensate for the receptor’s activity, which may cause another set of problems. “Cells don’t want the glucocorticoid receptor active for a long time,” Budunova says. “They want to shut it down.”

She and her colleagues are hot on the trail of two potentially safer treatment strategies. With Joel Dudley, PhD, director of the Next Generation Health Institute at Mount Sinai School of Medicine in New York, she discovered a gene called REDD1, short for “regulated in development and DNA damage response.”

The REDD1 gene appears to promote skin atrophy in patients treated with glucocorticoids. Studies in mice showed that knocking out REDD1 allows mice to benefit from the glucocorticoids without developing skin atrophy. Now, the team is screening for FDA-approved drugs that inhibit REDD1; they could potentially be repurposed and given in combination with glucocorticoids as tissue protectors, to prevent adverse effects. One that has emerged as a potential candidate is rapamycin, an immunosuppressant currently used to prevent organ transplant rejection.

She is also searching for alternative glucocorticoid ligands that have a safer pharmacological profile than classic glucocorticoids. One example of such a ligand is a synthetic version of a compound found in an African shrub.

“Using the combination of a REDD1 inhibitor and a topical steroid or of a steroid-like alternative without the steroid side effects could revolutionize how we treat skin disease,” Paller said.

Though all of this research revolves around skin, the work extends beyond the Department of Dermatology. The Northwestern Skin Disease Research Center supports investigators in at least 14 departments across the medical school and university. 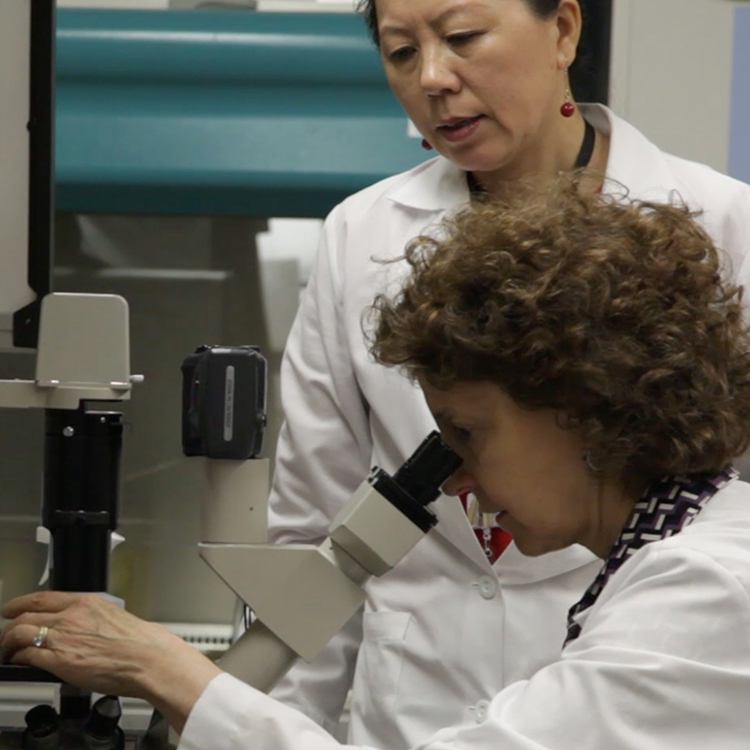 As center director, Paller not only promotes this interdisciplinary research — she does it herself. With Daniela Menichella, MD, PhD, ’08, ’11 GME, assistant professor of Neurology and Pharmacology, and Richard Miller, PhD, professor of Pharmacology, Paller has demonstrated that an enzyme called GM3 synthase mediates insulin resistance, impaired wound healing and peripheral neuropathy (nerve damage) in diabetes. Tamping down the activity of GM3 synthase prevents all of these signs in mouse models of diabetes.

Recently, Paller has been working with Chad Mirkin, PhD, professor of Medicine and George B. Rathmann Professor of Chemistry, on nanoparticle constructs called spherical nucleic acids (SNAs). Together, the two found that SNAs can penetrate skin and knock down genes, including GM3 synthase. GM3 synthase SNAs have already reversed the diabetic wound healing problem in mice. “Now we want to leverage these discoveries to see if we can apply this SNA or a small molecule inhibitor topically to prevent or treat neuropathy in the diabetic foot,” she says.

“Basic science is absolutely critical for any of the human disorders we are interested in understanding,” says Green, co-director of the Core.

Interdisciplinary support also is essential to work like Choi’s. He explains that his patients’ care and his studies depend on a team of dermatologists, pathologists, and medical and radiation oncologists, as well as important scientific collaborators in Biochemistry and Molecular Genetics. He and others in Dermatology use what they learn from patients to inform their hypotheses and then use what they find in their labs to improve patient care.

“We pride ourselves as a department that has a robust bedside to bench to bedside pipeline,” he says.

Adapted (with modifications) from Northwestern Medicine Magazine by Bridget Kuehn, posted on December 7, 2017.