Cooling to the rescue

CBC Awardee, Dr. Terry Vanden Hoek, UIC, named a 2018 Physician AND an Inventor of the Year!

High double-honors have recently been bestowed on Dr. Terry Vanden Hoek, professor and head of emergency medicine in the UIC College of Medicine. On November 20, 2018, Dr. Terry Vanden Hoek was presented by the Chicago Medical Society with the Physician of the Year Award and yesterday, he was honored for his research with UIC’s Inventor of the Year Award. These honors reflect Vanden Hoek’s exemplary dedication to increasing survival among the victims of cardiac arrest, as both a clinician and a researcher. His invention of cooling the body with an intravenously injected peptide—an agent developed in his lab—has already been shown to significantly improve cardiac arrest long term outcomes in animal models. In 2012, Vanden Hoek received a CBC Catalyst Award for exactly this type of research: “Design and Delivery of TAT Fusion Proteins for Cardiopulmonary Resuscitation.” Recently, his CBC Accelerator Award proposal, “Novel PHLPP Peptide For Asystole/PEA Resuscitation,” was announced as one of four winning proposals eligible for founding in the Accelerator Award Application round 2. CBC joins in congratulations on all accolades received by Dr. Vanden Hoek in this undoubtedly important line of biomedical research. 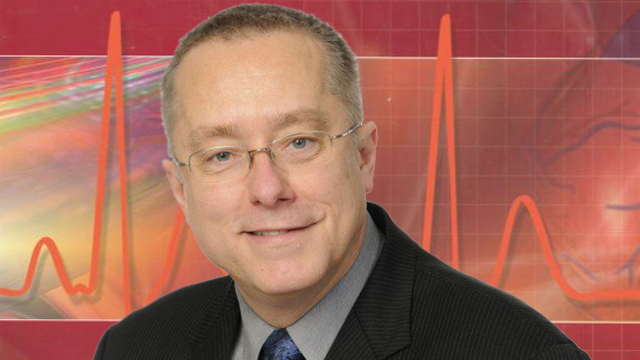 Not many people outside of emergency responders know that cooling the body by just a few degrees can reduce the risk of long-term heart and neurological effects and improve the chances of survival for cardiac arrest. But the equipment used to lower the body’s core temperature can be difficult to use while performing CPR.

Dr. Terry Vanden Hoek, professor and head of emergency medicine in the UIC College of Medicine, is investigating a biological agent that mimics the effects of cooling on the body, and that can be delivered intravenously.

“We developed this peptide that produces some of the most important effects of cooling on the body without having to cool the body,” Vanden Hoek said.

Vanden Hoek has been honored for his work by being named the recipient of UIC’s Inventor of the Year Award. He will be recognized at a ceremony and reception from 3:30 to 6 p.m. Feb. 6 in the Michele M. Thompson Rooms, Student Center West.

The peptide, called TAT-PTEN9c, is currently being tested in animal models for its effect on survival and other outcomes linked to cardiac arrest. When delivered up to 15 minutes after an induced cardiac arrest in mice, the animals were revived and were determined to have no lingering effects.

“We are really bringing these animals back to life,” Vanden Hoek said.

The drug also seems to have a synergistic effect when used together with nicotinamide, also known as vitamin B3. Vanden Hoek, who is also chief medical officer of the University of Illinois Hospital, will investigate using both agents together in animal models. The research is supported by a $1.2 million grant from the National Institutes of Health.

The work is only one part of Vanden Hoek’s overall portfolio, which focuses on saving lives by preventing death from cardiac arrest. He has also led a state-wide initiative aimed at reducing deaths due to out-of-hospital cardiac arrest called Illinois Heart Rescue. The program, which was funded by a grant from the Medtronic Foundation and launched in 2013, has improved survival for cardiac arrest from 3 percent to 10 percent in Illinois by training citizens in how to perform CPR and use automated electronic defibrillators, or AEDs.

“Immediate CPR, performed by a bystander, is the best chance a person has at surviving a sudden cardiac event,” Vanden Hoek said. “The work with TAT-PTEN research will help complement those efforts by further improving survivability for cardiac arrest not only in Illinois, but we hope, one day across the globe.”

Adapted (with modifications) from the UIC today by Sharon Parmet, published on January 24, 2019.