A new publication in Molecular Psychiatry, “HCN-channel dendritic targeting requires bipartite interaction with TRIP8b and regulates antidepressant-like behavioral effects,” reveals a novel molecular mechanism that may play a part in causing depression and discusses the promise of targeted gene therapy in humans. Two CBC researchers and recipients of a 2013 HTS award, Dane Chetkovich and Ye Han (NU), contributed to this important discovery. Congratulations!

The paper serves as a prelude to the upcoming CBC Annual Symposium that will focus this year on the Genetics of Neurological and Psychiatric Disorders. Stay tuned!

CHICAGO — Northwestern Medicine scientists have shown how manipulating a novel target in the brain using gene therapy could lead to new treatments for depression.

The investigators showed decreasing a set of proteins called HCN channels reduced depression-like behavior in mice. If replicated in humans, the findings could inform fresh therapies for millions of patients who do not respond to existing treatments for depression. 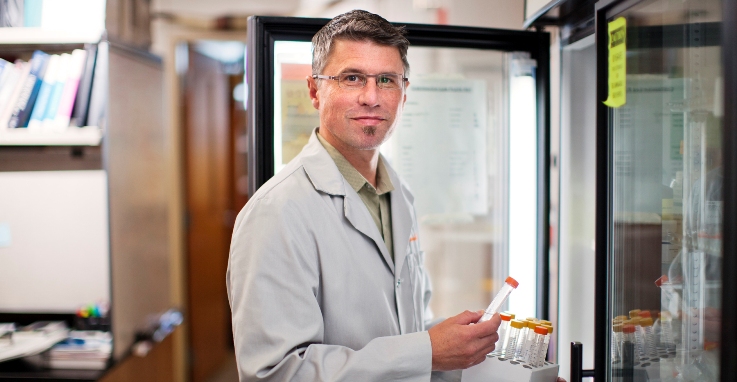 “Drugs currently available for treating depression help most patients, but they stop working for some patients and don’t work from the get-go for others,” said senior author Dr. Dane Chetkovich (right), a professor of neurology and of physiology at Northwestern University Feinberg School of Medicine and a Northwestern Medicine neurologist. “There is a real need for new therapies to help patients desperate for alternatives to the available therapeutic options.”

The study will be published July 12 in the journal Molecular Psychiatry.

Most existing antidepressants affect mood and emotions by increasing levels of neurotransmitters called monoamines, namely serotonin, dopamine and norepinephrine. But the fact that these drugs are not effective for many patients suggests there are additional mechanisms underlying depression yet to be uncovered that could be targeted with new therapies.

In previous research, Chetkovich’s lab and others showed those mechanisms might involve the hippocampus, a region of the brain important for learning, memory and emotional regulation. There, they saw changes to HCN channels, typically involved in controlling the electrical activity of cells in the heart and brain, also played a critical role in behaviors linked to depression.

In the new study, a group of Northwestern scientists led by Chetkovich took steps to translate that insight into a potential gene therapy using mouse models. The scientists surgically injected mice with a nontoxic virus engineered to express a gene that turns off HCN channel function in hippocampus neurons.

“When the HCN channels stopped working, the mice behaved as if they’d been given antidepressant medications,” Chetkovich explained.

In contrast, increasing the function of HCN channels removed the antidepressant effect.

To measure depression-like behavior, the scientists measured how long mice would seek to escape an environment before giving up — a test commonly used by the pharmaceutical industry to screen compounds for effectiveness as antidepressants, including medications currently on the market.

“This work not only identifies a totally new treatment target for depression, it provides a detailed molecular description of the structures that need to be manipulated for it to act as an antidepressant and develops viral tools to do so,” said Chetkovich, who is also director of Feinberg’s Medical Scientist Training Program.

In future research, the scientists are focusing on adapting the viral gene therapy approach to human patients. They also have a grant from the National Institute of Mental Health to find small molecules that could be developed into oral medications to turn off HCN channels in the brain.

Highlights of the Molecular Psychiatry paper include: