Congratulations to Daniel Dombeck, who received a CBC Junior Investigator award in 2011. He and Mark W Howe, a postdoctoral fellow in his lab, just published their breakthrough findings in the July 12 issue of Nature: “Rapid Signaling in Distinct Dopaminergic Axons During Locomotion and Reward.” Dombeck and Howe are the first to discover two distinct populations of dopaminergic neurons that control movement and learning/reward behavior, respectively. This discovery will have far-reaching implications in understanding, and ultimately treatment, of many neurological disorders such as Parkinson’s Disease.

EVANSTON, Ill. — Two Northwestern University neuroscientists have identified the neurochemical signal likely missing in Parkinson’s disease by being the first to discover two distinctly different kinds of neurons that deliver dopamine to an important brain region responsible for both movement and learning/reward behavior. 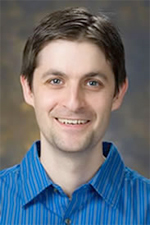 “It has been dogma for decades that all dopamine neurons are somehow involved in both movement and reward, but this didn’t really make sense,” said Daniel A. Dombeck (right), the study’s senior author. “Now, it is so obvious in our recordings that there are different kinds of neurons. We can literally see this in behaving animals. Our findings will likely help answer many questions about Parkinson’s disease and other neurological mysteries.”

Dombeck, an assistant professor of neurobiology in the Weinberg College of Arts and Sciences, conducted the study with postdoctoral fellow Mark W. Howe.

Prior to this study, there was little evidence for rapid movement-locked dopamine signaling in the brain. The findings were published yesterday (July 11) by the journal Nature.

The scientists developed sophisticated imaging techniques to see what no one else has seen before: two distinct populations of dopamine neurons in the brain region of the striatum, one carrying signals for motor control and movement and the other transmitting signals about unpredicted (surprise) reward. The findings overturn the current model of how dopamine neurons influence behavior.

“There has always been this paradox about how dopamine does both movement and reward-based behavior,” Howe said. “What we found is that it does both and that there are different populations that do each one. And the neurons that do movement care about it on a very rapid timescale. These are the dynamics likely affected in Parkinson’s.”

The study provides critical information for the development of more targeted treatments of Parkinson’s, a neurodegenerative disease caused by the death of dopamine neurons. Current treatments focus on replacing ambient pools of brain-wide dopamine. This study suggests that future treatments could be more effective by targeting the specific cell types, regions and timescales that appear to be most involved in movement control.

Dombeck and Howe’s high-resolution imaging tools enabled them to observe the dynamics of the dopamine system with unprecedented detail in active mice. In studying the animals while either running on a wheel or receiving an unpredicted reward and imaging the axons of the dopamine neurons in the striatum during those activities, the scientists were able to tease apart different dopamine axons and identify the two distinct populations.

They imaged a couple of axons to many dozens of axons at a time, depending on the experiment, to see what the activity looked like. The axons related to movement and Parkinson’s were active when the animal was running but not when the animal got a reward.

This movie shows rapid signaling dynamics in dopamine axons that have never before been observed in a brain. Each thin orange fiber is an individual dopamine axon, approximately 1 micrometer in diameter. The movie was captured using a powerful new imaging technique. Courtesy Daniel Dombeck’s lab, Northwestern.

Also, using optogenetics, the researchers showed they can control an animal’s movement by shining a light on genetically labeled movement axons, showing that dopamine can trigger locomotion.

“This study changes the way we think about the role of dopamine neurons in movement,” said Raj Awatramani, an associate professor in neurology at Northwestern University Feinberg School of Medicine, who was not involved in the research. “It is a very important study in the field.”

Awatramani, an expert in the molecular basis of dopamine neuron diversity, recently began a research collaboration with Dombeck and his group to further study dopamine neurons, both their function and molecular makeup.

Highlights of the Nature paper include:

The research was supported by the Klingenstein Foundation, McKnight Foundation, Whitehall Foundation, Chicago Biomedical Consortium with support from the Searle Funds at Chicago Community Trust, Northwestern University and the National Institutes of Health (grant T32 AG20506).