From bench to market

CBC community members from UChicago contribute to the commercialization pipeline at many different entry points. CBC poised to help.

In the expansive article, originally published in the UChicago Medicine Magazine, Medicine on Midway, Steve Koppes describes several means of support available to the entrepreneurial faculty at UChicago, including the new Duchossois Family Institute, Institute for Translational Medicine (ITM) and Polsky Center for Entrepreneurship and Innovation. CBC community members are frequently mentioned throughout the article as important participants and influencers of the commercialization pipeline at UChicago. Julian Solway, who is director of the ITM and dean for translational medicine, in 2013 was a speaker at CBC Exploratory Workshop on Cellular Heterogeneity. Matt Martin, Polsky’s microbiome lead for technology commercialization is a current CBC Accelerator Review Board Member and active participant in the CBC Accelerator Network (CBCAN). Eugene Chang, whose biotech company AVnovum Therapeutics, Inc., is among four that Polsky Center enabled in 2018, is a 2015 CBC Catalyst Award recipient. Since entering Phase 2 in 2017, CBC has revised its mission adding “to accelerate discovery that will transform biomedical research and improve the health of humankind.” We encourage all to learn about the new award programs and initiatives that are available to the three CBC institutions, including UChicago, and tailored to strengthen the path that has been coined as, from bench to market (see below). 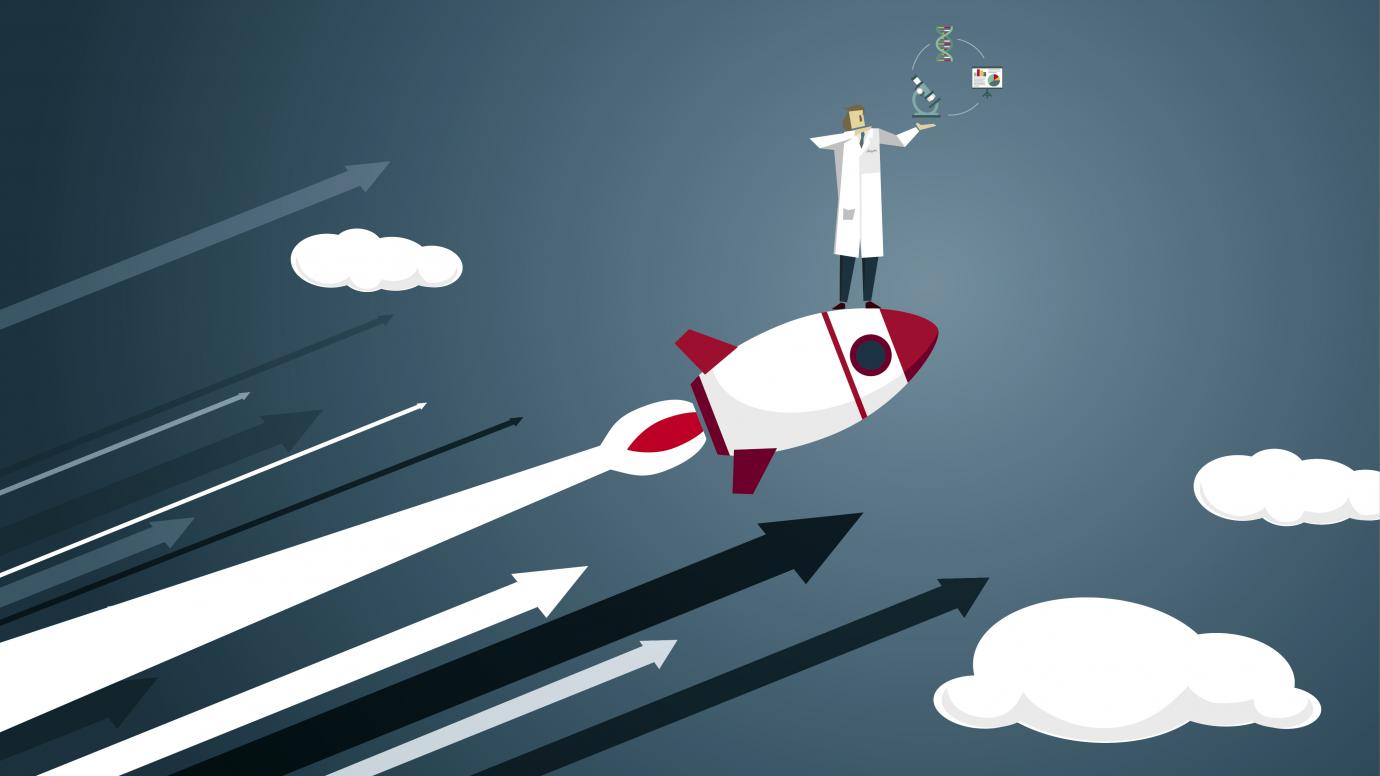 Few people get a bigger whiff of the entrepreneurial spirit taking hold among biosciences faculty members than Thelma Tennant. “I walk down the halls of the lab buildings regularly,” Tennant said, “and I don’t think I’ve made it to a meeting without having someone come out a door and say, ‘Hey, I’ve been meaning to call you.’”

Tennant, whose doctorate is in cancer biology, is the oncology lead for technology commercialization in the University of Chicago’s Polsky Center for Entrepreneurship and Innovation. For the past year, she’s also been one of several Polsky staffers embedded in the Duchossois Family Institute: Harnessing the Microbiome and Immunity for Human Health.

The Duchossois Family Institute was founded with a $100 million gift from The Duchossois Group Inc. Chairman and CEO Craig Duchossois; his wife, Janet Duchossois; and The Duchossois Family Foundation to accelerate research and interventions based on how the immune system, microbiome and genetics interact to maintain health. The entrepreneurial infrastructure includes commercialization specialists with a deep understanding of science and the path to market. Embedded within the DFI, they work closely with faculty and students to build strong patent applications and the relationships with investors and industry needed to successfully develop and license these technologies.

The new institute completes a pipeline that starts for some faculty with the Institute for Translational Medicine, a health research accelerator that offers seed funding and other support for UChicago researchers to explore dynamic ideas that could improve human health. The ITM provides a range of resources that enable scientists to do the research and get the early-stage data they need to attract investors and commercialize their work.

“The launch of the Duchossois Family Institute and Polsky Center’s new programs now gives our researchers with science-supported ideas someplace to go for health care startup expertise,” said Julian Solway, director of the ITM and dean for translational medicine. “We’re thrilled to work with such great allies to speed the innovation pipeline at the University of Chicago.” 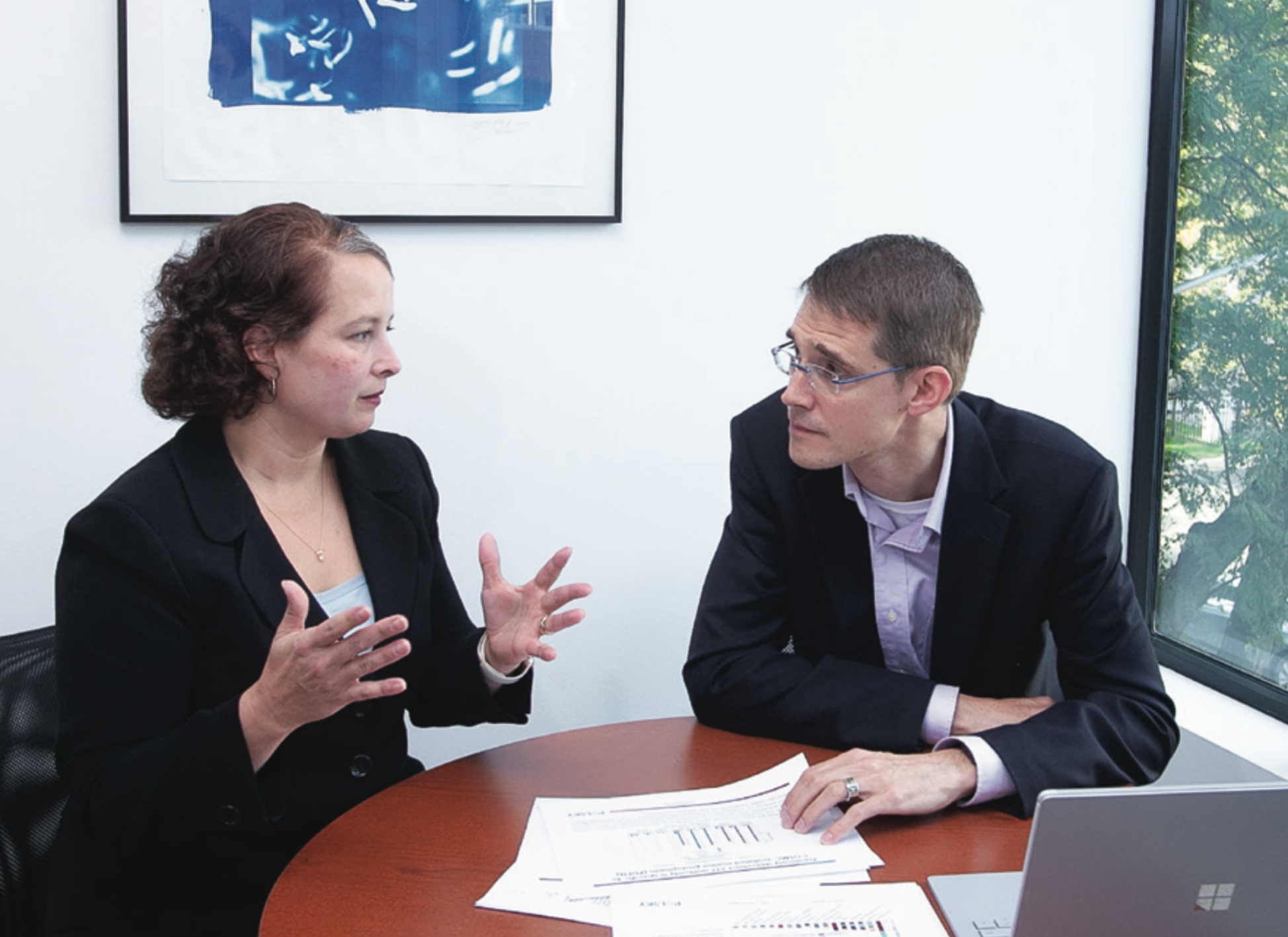 (Photo by Joe Sterbenc. Source: Medicine on the Midway.)

The approach is working. “Over the last year we’ve had tremendous success,” said Matt Martin, Polsky’s microbiome lead for technology commercialization. “We’ve now put together four companies that wouldn’t have existed without this new model.”

This recent success prompted the creation of the Polsky Life Sciences Launchpad, which also encompasses microbiome-based research in oncology and neuroscience at the University of Chicago Medicine. The Launchpad provides hands-on, end-to-end support for select translational, life sciences research projects. The goal: launch them into investable startup ventures.

Radiology professor Maryellen Giger has a long and successful history in creating such ventures. Her experience as an innovator and entrepreneur dates to the late 1980s, when she and four UChicago colleagues developed systems for the computer-aided detection of tumors in medical images. R2 Technology licensed their UChicago patents for the technology in 1993; five years later, it was the first company to gain approval from the U.S. Food and Drug Administration to use CAD for mammography screening. Quantitative Insights, Inc., the newest company based on Giger’s work, is distributing the first FDA-cleared computer-aided diagnosis platform incorporating machine learning for the evaluation of breast abnormalities.

As a student, Giger wondered why faculty members didn’t make their intellectual property freely available to everyone for the public benefit. “Then I learned that one should obtain a patent and license it to only one or two companies,” she said. “If everyone received the intellectual property for free, no one would invest the time and funding in translating it into a product, because it’s expensive to take a lab device through the FDA and into a commercial clinical product.”

When University intellectual property is protected and licensed to companies, including startups, everyone benefits. The revenue generated by these licenses is shared by the University and the innovators. Innovators receive revenue in recognition of their critical role in the discovery and to incentivize translational activity. The remainder is reinvested across the institution, including the innovators’ labs and departments to support ongoing research, and the Polsky Center to protect new intellectual property.

Start up — and out

Just as important, commercialization enables researchers to get their innovations out into the public more quickly and make a bigger impact on human health.

Staph infections kill an estimated 19,000 people annually and infect tens of thousands more. Olaf Schneewind, chair of the Department of Microbiology, has been working for 15 years on a vaccine that could neutralize the scourge of Staphylococcus aureus, including antibiotic-resistant strains.

“That would be an extraordinary scientific victory,” he said.

ImmunArtes is the startup based on the work of Schneewind and his associates. Over the last two decades, Schneewind said, many large companies have found that maintaining their own research and development is less efficient than shifting that burden to startups, which take extraordinary risks in developing new technologies that could then be purchased at an early stage.

Schneewind has received more than $5 million from the National Institute of Allergy and Infectious Diseases, which also has assisted with product development. If sufficient private sector funding fails to come through, Schneewind may still be able to develop a vaccine on a shoestring budget with funding from the National Institutes of Health—but it would take longer. “I see a path forward in this no matter what,” he said. “I’m committed to finishing.”

Kidney stones affect about one in five men and one in 11 women in this country. Oxalo Therapeutics seeks to bring an oral preventative of calcium oxalate kidney stones to market in the next seven or eight years, potentially bringing relief to patients with this painful condition. The company, co-founded by Asst. Prof. Hassan and Yang Zheng, a student at the University of Chicago Booth School of Business, recently was awarded $2.3 million through the NIH’s Small Business Technology Transfer program. Oxalo also advanced to the final round of the 2018 MassChallenge Boston — one of just two biotech startups among the 26 finalists. A total of 128 startups, including ImmunArtes, were chosen to participate in the highly selective accelerator program out of more than 1,600 competitors worldwide.

“If we are successful in developing this pill and lowering urine and blood oxalate, it will open the door for redefining the standard of care,” said Hassan, who worked closely with the Polsky Center’s Martin in launching his enterprise.

To market, to market

Oncologist Olufunmilayo (Funmi) Olopade leveraged the expertise of Chicago Booth students in launching CancerIQ, a company based on her cancer risk assessment tools. The company’s digital products make it easier for community-based physicians to deliver cancer risk assessment, prevention and genetically informed treatment to their patients. The push to launch the company, however, came from her daughter, Feyi Olopade Ayodele, MBA, CancerIQ’s co-founder and chief executive officer.

Ayodele, a graduate of the University of Pennsylvania’s Wharton School of Business, worked with her mother to pitch the idea to a group of students in the D4 Lab, an experiential learning collaboration between the Polsky Center, the ITM and ITM affiliate member the IIT Institute of Design at the Illinois Institute of Technology. D4 stands for Discovery, Design, Develop and Do, and it applies human-centered design to solve problems in clinical medicine.

Several Chicago Booth students joined the CancerIQ team, making sequential stops at San Francisco’s Rock Health, which funds and supports health technology entrepreneurs; 1871, Chicago’s digital tech co-working space and incubator; and the MATTER health technology incubator in Chicago. A turning point was when Ayodele, who took a leave of absence from her job at McKinsey & Company to investigate CancerIQ’s market potential, insisted that her mother take a sabbatical to incubate their startup at Rock Health.

“I learned very early that these young people are just amazing,” Prof. Olopade said. “They know what they’re doing, but they needed clinical insight.” They needed the experienced oncologist to walk them through her workflow process every day in order to build prototype software.

“My lesson is that we need to take more risk and support young people with ideas,” Olopade said.

Source:
Adapted (with modifications) from the UChicago News, by Steve Koppes, published on January 2, 2019.

See also:
▸ From bench to startup to bedside (PDF)
An excerpt form the Medicine on the Midway, Fall 2018.