Tiny biosensors for the tiniest

Congratulations to an interdisciplinary team at NU led by John Rogers, for developing small wireless biosensors that can be placed on skin of prematurely born babies in need of constant monitoring. The sensors are capable of sensing baby’s heart rate, respiration rate, core body temperature, blood oxygen levels, peripheral body temperature, blood pressure, blood flow as well as vitals during parent-baby interactions. Gentler for the skin, the tiny patches placed on the chest and the foot replace the numerous wired-based sensors that entrap the newborn, impair movement, and create obstacles to proper baby-parent bonding. Preliminary research results conducted on 20 babies at NICU at Prentice Women’s Hospital and the Ann & Robert H. Lurie Children’s Hospital have recently been published in Science, demonstrating that the wireless sensors not only provide accurate measurements as compared with the wired sensors but also monitor additional parameters, providing more comprehensive care for the babies. The human element of using biosensors on the tiniest of the patients cannot be underestimated as they allow the parents to have unparalleled freedom to interact with their wire-free newborns in a more natural family experience.

Soft, flexible sensors are the first to monitor babies in the NICU with precision and without wires 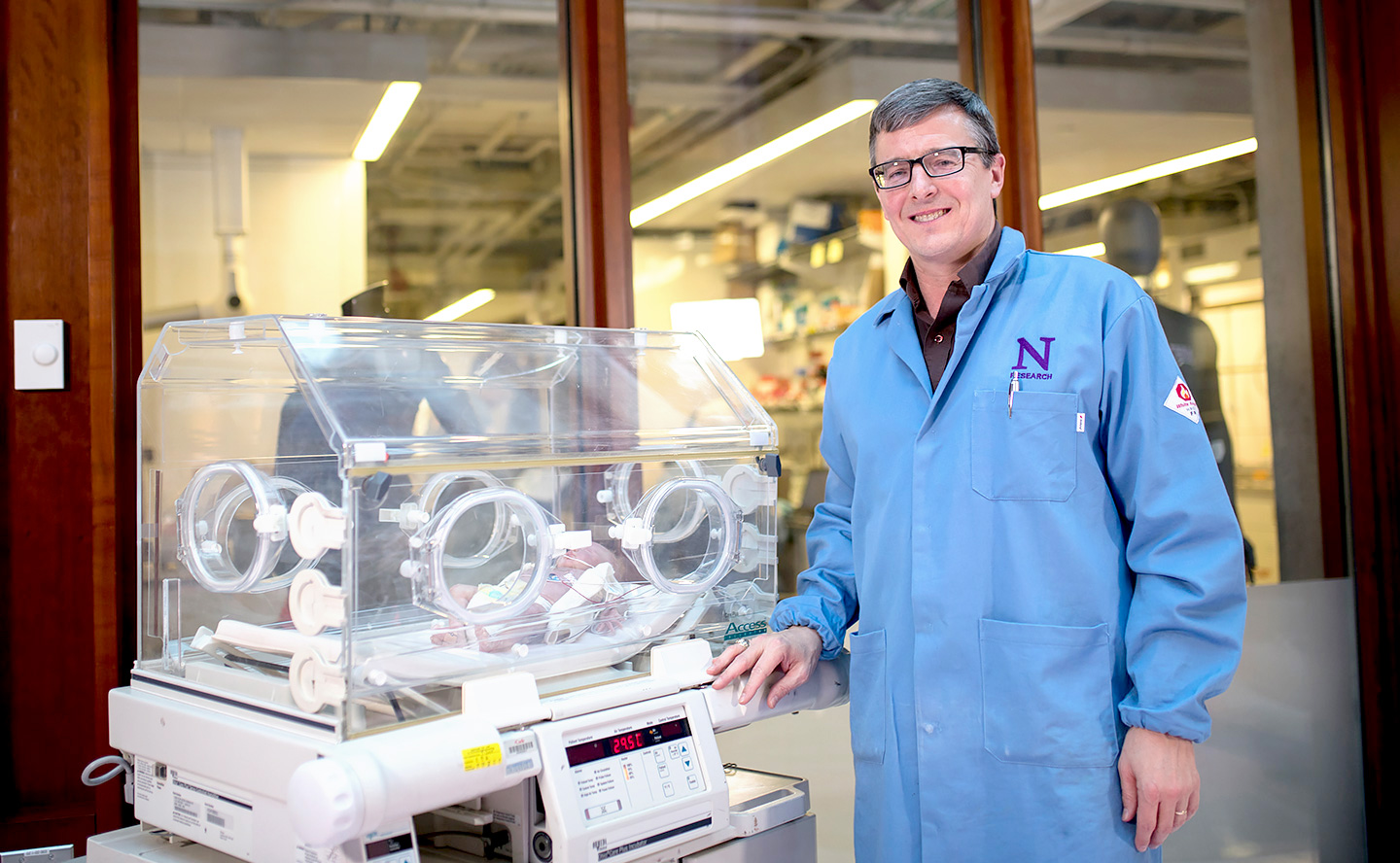 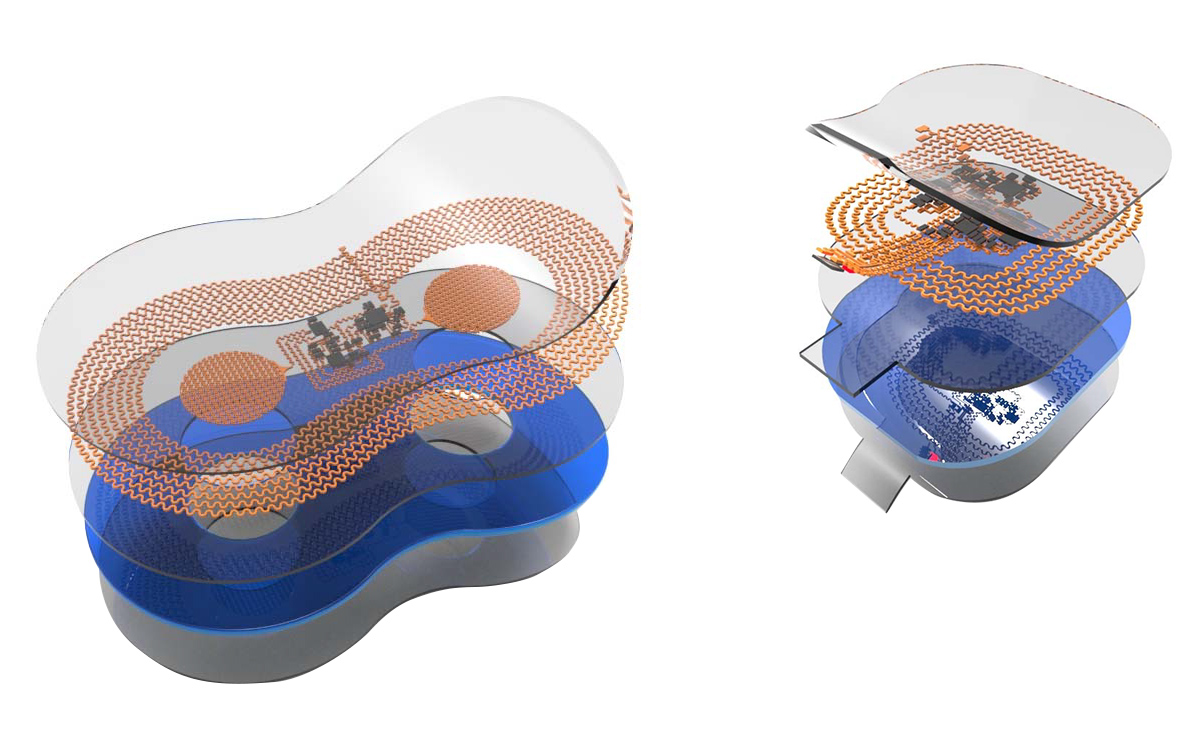 An interdisciplinary Northwestern University team has developed a pair of soft, flexible wireless body sensors that replace the tangle of wire-based sensors that currently monitor babies in hospitals’ neonatal intensive care units (NICU) and pose a barrier to parent-baby cuddling and physical bonding.

The team recently completed a collection of first human studies on premature babies at Prentice Women’s Hospital and the Ann & Robert H. Lurie Children’s Hospital in Chicago and concluded that the wireless infant sensors provided data as precise and accurate as that from traditional monitoring systems. The wireless patches also are gentler on a newborn’s fragile skin and allow for more skin-to-skin contact with the parent.

The study includes initial data from more than 20 babies who wore the wireless sensors alongside traditional monitoring systems, so Northwestern researchers could do a side-by-side, quantitative comparison. Since then, the team has conducted successful tests with more than 70 babies in the NICU.

“We wanted to eliminate the rat’s nest of wires and aggressive adhesives associated with existing hardware systems and replace them with something safer, more patient-centric and more compatible with parent-child interaction,” says John A. Rogers, a bioelectronics pioneer, who led the technology development. “Our wireless, battery-free, skin-like devices give up nothing in terms of range of measurement, accuracy and precision — and they even provide advanced measurements that are clinically important but not commonly collected.”

The mass of wires that surround newborns in the NICU are often bigger than the babies themselves. Typically five or six wires connect electrodes on each baby to monitors for breathing, blood pressure, blood oxygen, heartbeat and more. Although these wires ensure health and safety, they constrain the baby’s movements and pose a major barrier to physical bonding during a critical period of development.

“We know that skin-to-skin contact is so important for newborns — especially those who are sick or premature,” says Paller, a pediatric dermatologist. “It’s been shown to decrease the risk of pulmonary complications, liver issues and infections. Yet, when you have wires everywhere and the baby is tethered to a bed, it’s really hard to make skin-to-skin contact.” 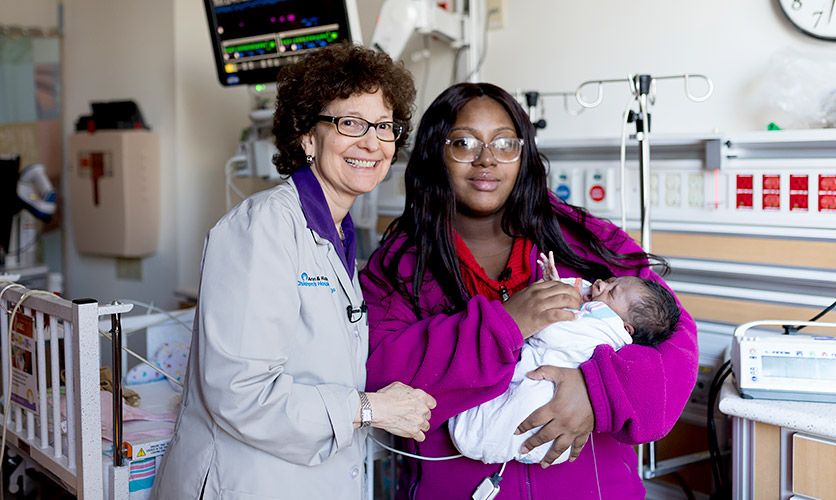 New mother Taschana Taylor is familiar with that frustration. After an emergency C-section, Taylor’s daughter Grace was rushed to the NICU, where she remained for three weeks. Desperate to bond with their new baby, Taylor and her husband felt exhausted when navigating the wires to provide Grace with the most basic care. Grace is among the 70 babies who have participated in the side-by-side comparison study so far.

“Trying to feed her, change her, swaddle her, hold her and move around with her with the wires was difficult,” Taylor says. “If she didn’t have wires on her, we could go for a walk around the room together. It would have made the entire experience more enjoyable.”

“Anybody who has had the experience of entering a NICU immediately notices how tiny the babies are, and how many wires and electrodes are attached to them,” says pediatrician Dr. Debra Weese-Mayer. “The opportunity to go wireless has enormous potential for decreasing the burden for the nurses, for the babies and for the parents.”

The benefits of the Northwestern team’s new technology reach beyond its lack of wires — measuring more than what’s possible with today’s clinical standards.

“Differences in temperature between the foot and the chest have great clinical importance in determining blood flow and cardiac function,” Rogers says. “That’s something that’s not commonly done today.”

Physicians also can measure blood pressure by continuously tracking when the pulse leaves the heart and arrives at the foot. Currently, there is not a good way to collect a reliable blood pressure measurement. A blood pressure cuff can bruise or damage an infant’s fragile skin. The other option is to insert a catheter into an artery, which is tricky because of the slight diameter of a premature newborn’s blood vessels. It also introduces a risk of infection, clotting and even death.

The device also could help fill in information gaps that exist during skin-to-skin contact. If physicians can continue to measure infants’ vital signs while being held by their parents, they might learn more about just how critical this contact might be. Transparent and compatible with imaging, the sensors also can be worn during X-rays, MRIs and CT scans.

The blood pressure cuff isn’t the only potentially damaging part of current technology. Many premature babies suffer skin injuries from the sticky tape that adheres the wires to the body. Tape can cause skin irritation, blisters and, ultimately, infections. In some cases, this damage can lead to lifelong scarring.

“Premature babies’ skin is not fully developed, so it’s incredibly fragile,” Paller says. “In fact, the thickness of the skin in premature infants is about 40 percent reduced. The more premature you get, the more fragile the skin becomes. That means we have to be very careful.”

The Northwestern team has studied 70 babies in the NICU thus far and found no sign of skin damage from the wireless sensors. The sensor’s skin-saving secret lies in its lightweight nature, thin geometry and soft mechanics. The paper-thin device is made from bio-compatible, soft elastic silicone that embeds a collection of tiny electronic components connected with spring-like wires that move and flex with the body. Rogers worked with longtime collaborator and stretchable electronics and theoretical mechanics expert Yonggang Huang to come up with an optimal design.

The wireless sensor communicates through a transmitter placed underneath the crib’s mattress. Using radio frequencies the same strength as those in RFID tags, the antenna transmits data to displays at the nurses’ station. Although it can be sterilized and reused, the sensor is cheap enough (about $10) that it can simply be discarded after 24 hours and replaced with a new one to eliminate any risk of infection.

When will sensors enter hospitals?

Rogers estimates that his wireless sensors will appear in U.S. hospitals within the next two to three years. With support from two major nonprofit organizations, Rogers’ team expects to send sensors to tens of thousands of families in developing countries over the next year as part of an international effort.

“We’re proud of the fact that this technology isn’t just limited to advanced NICUs in developed countries,” Xu says. “The technology can be adapted with minimal modification for low-resource settings.”

Source:
Adapted (with modifications) from the Northwestern Now, by Amanda Morris, published on February 28, 2019.