Congratulations to CBC Catalyst team members Peng Ji of Northwestern and Amittha Wickrema of the University of Chicago for their recent publication in Developmental Cell: “Nuclear Condensation during Mouse Erythropoiesis Requires Caspase-3-Mediated Nuclear Opening.” Ji and Wickrema received a Catalyst award in 2014 for the project: “Nuclear Opening and Histone Release in Mammalian Terminal Erythropoiesis.” The authors describe an unusual finding: a dynamic opening in the nuclear membrane of immature erythrocytes. This transient “hole” channels out nuclear proteins doomed for degradation during the final process of erythrocytes maturation. 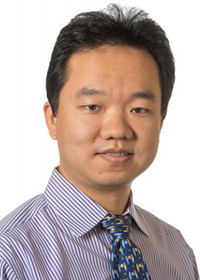 New Northwestern Medicine research has revealed a surprising phenomenon behind the production of red blood cells.

As immature cells differentiate into mature red blood cells, their nuclei and the genetic material inside them – called chromatin – condense, a process that scientists did not fully understand until now.

In a paper published in Developmental Cell, a team led by Peng Ji, MD, PhD, ’13 Northwestern GME, assistant professor of Pathology at Northwestern University Feinberg School of Medicine, showed that a large opening forms on the nuclear membrane of immature red blood cells, allowing histones – proteins in the chromatin – to release from the nucleus and degrade.

Dr. Ji compares this transient, recurring opening on the nucleus to a volcano on the earth’s surface, with histones pouring out like lava.

“Unexpectedly, major histones, scaffold proteins wrapping genomic DNAs, are partially released from the opening into the cytoplasm,” Dr. Ji said. “We discovered that the nuclear opening is formed by caspase-3, a protein involved in protein cleavage.”

The scientists demonstrated that inhibiting caspase-3 blocks the nuclear opening and likewise stops histone release from the opening and chromatin condensation. Without the protein, cell differentiation is interrupted.

The findings may explain a root of some blood diseases. 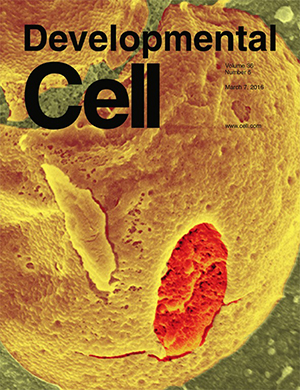 Developmental Cell, 07 March 2016, Volume 36, Issue 5. On the cover: Image of a nuclear opening in a mouse erythroblast. A nucleus of a mouse fetal liver erythroblast, acquired using cryo-scanning electron microscopy, shows an opening on the nuclear envelope (yellow). Histones (red) are exposed and released from the opening.

“Our study reveals the mechanism of chromatin condensation during red cell development, which may provide clues for the pathogenesis of red cell-related diseases with unknown etiology,” said Dr. Ji, who is also a member of the Robert H. Lurie Comprehensive Cancer Center of Northwestern University. “Our study may also shed light on the possible mechanisms of chromatin condensation in other developmental systems, such as spermatogenesis.”

Cells in the epidermis and the eye’s lens epithelia also undergo chromatin condensation and involve caspase-3 in their differentiation.