A counterintuitive “cost” of mimicry. A study co-authored by three UChicago evolutionary biologists with links to CBC.

In butterflies, the ability to present the wing pattern of other, poisonous species—or mimicry—is controlled by an inverted copy of a supergene called doublesex. Surprisingly, mimicry among some butterfly females appears to be linked to a shorter life span. A fascinating story examining the origins of mimicry and a mystery behind what might have gone wrong when the doublesex gene “flipped,” has just been published in Nature Communications. Three UChicago scientists with links to CBC are among the co-authors on the paper: Markus Kronforst (senior author) received a CBC Postdoctoral Award in 2014 together with Erica Westerman, a postdoc in his lab at the time of the award, and Stephanie Palmer is a recipient of a CBC Catalyst Award (2015). Currently, Stephanie also serves on the CBC Catalyst Review Board. Congratulations! 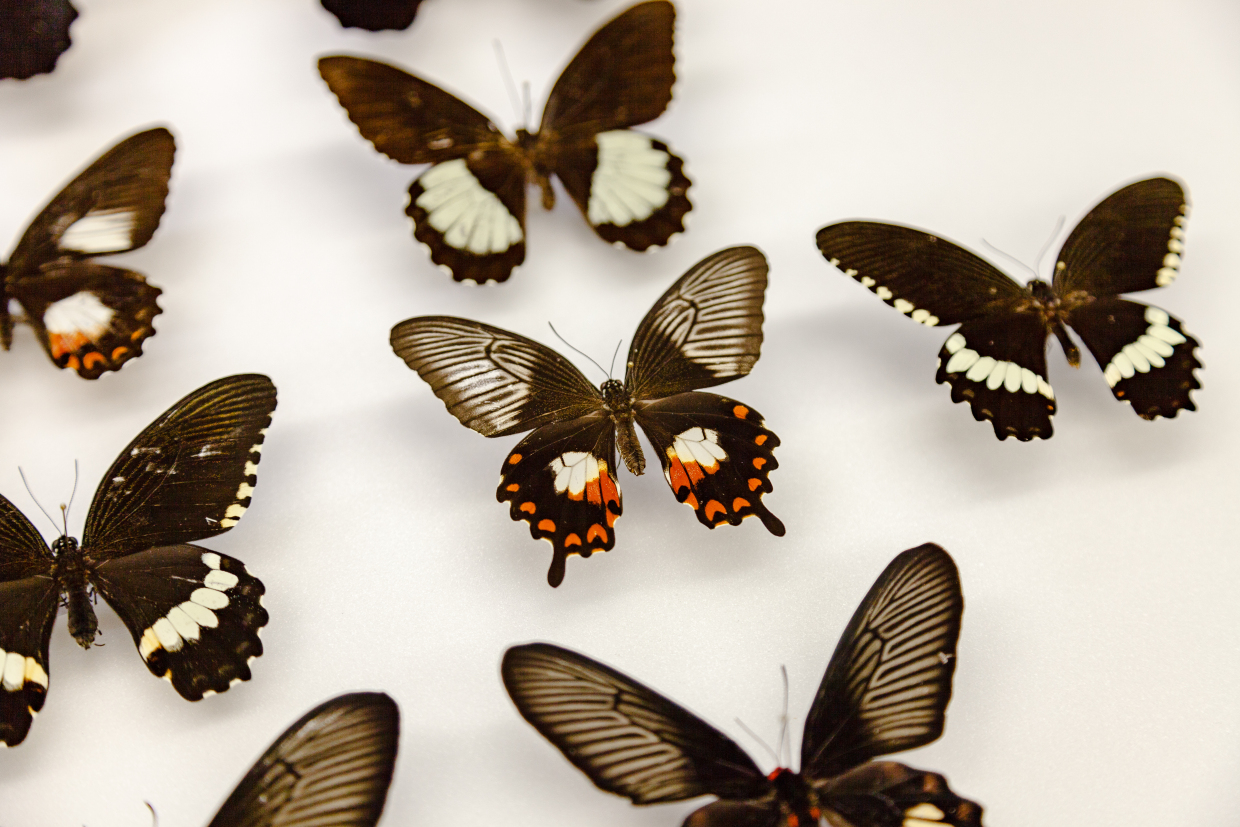 Several different swallowtail butterfly variations showing mimicry and polymorphism, or different forms of the same species. In the center, a female Papilio polytes that mimics another species that is toxic to predators. (Credit: Matt Wood)

Female swallowtail butterflies do something a lot of butterflies do to survive: they mimic wing patterns, shapes and colors of other species that are toxic to predators. Some – but not all – swallowtail species have evolved several different forms of this trait. But what kind of genetic changes led to these various disguises, and why would some species maintain an undisguised form when mimicry provides an obvious evolutionary advantage?

In a new study published this week in Nature Communications, scientists from the University of Chicago analyze genetic data from a group of swallowtail species to find out when and how mimicry first evolved, and what has been driving those changes since then. It’s a story that started around two million years ago, but instead of steady, progressive changes, one chance genetic switch helped create the first swallowtail mimics. And it has stuck around ever since.

“In butterflies with one color pattern, we have a gene in a normal orientation on the chromosome. In the butterflies with the unusual, alternate color pattern, that gene was spliced out, flipped, and then spliced back into the chromosome at some point,” said Marcus Kronforst, PhD, associate professor of ecology and evolution at UChicago and the senior author of the study.

“That flip, or inversion, keeps the two genes from recombining if those two different kinds of butterflies mate, so they’ve kept both copies of the gene over evolutionary time, since they split from their common ancestor two million years ago,” Kronforst said.

For a long time, scientists thought that butterfly mimicry was controlled by “supergenes,” groups of several tightly linked genes that were always inherited as a group. In a 2014 study, Kronforst and his colleagues showed what appears to be a supergene is actually a single gene called doublesex that controls the different color patterns and shapes we see in female swallowtails.

The doublesex gene was already well-known for its role in differentiating between sexes, but in females the inverted, or flipped, version also dictates wing patterns. It can still be thought of as a supergene because it controls the entire, complex process of wing patterning, but in this case, it is just the single gene.

In the new study, led by postdoctoral fellow Wei Zhang, PhD, the team analyzed whole-genome sequence data form Papilio polytes, the Asian swallowtail butterfly, and several similar species to see how they are related to each other, and how their copies of doublesex compare. Using these data, the team compared some alternative explanations for the origins of mimicry and identified key factors that have maintained different forms of mimicry long-term. 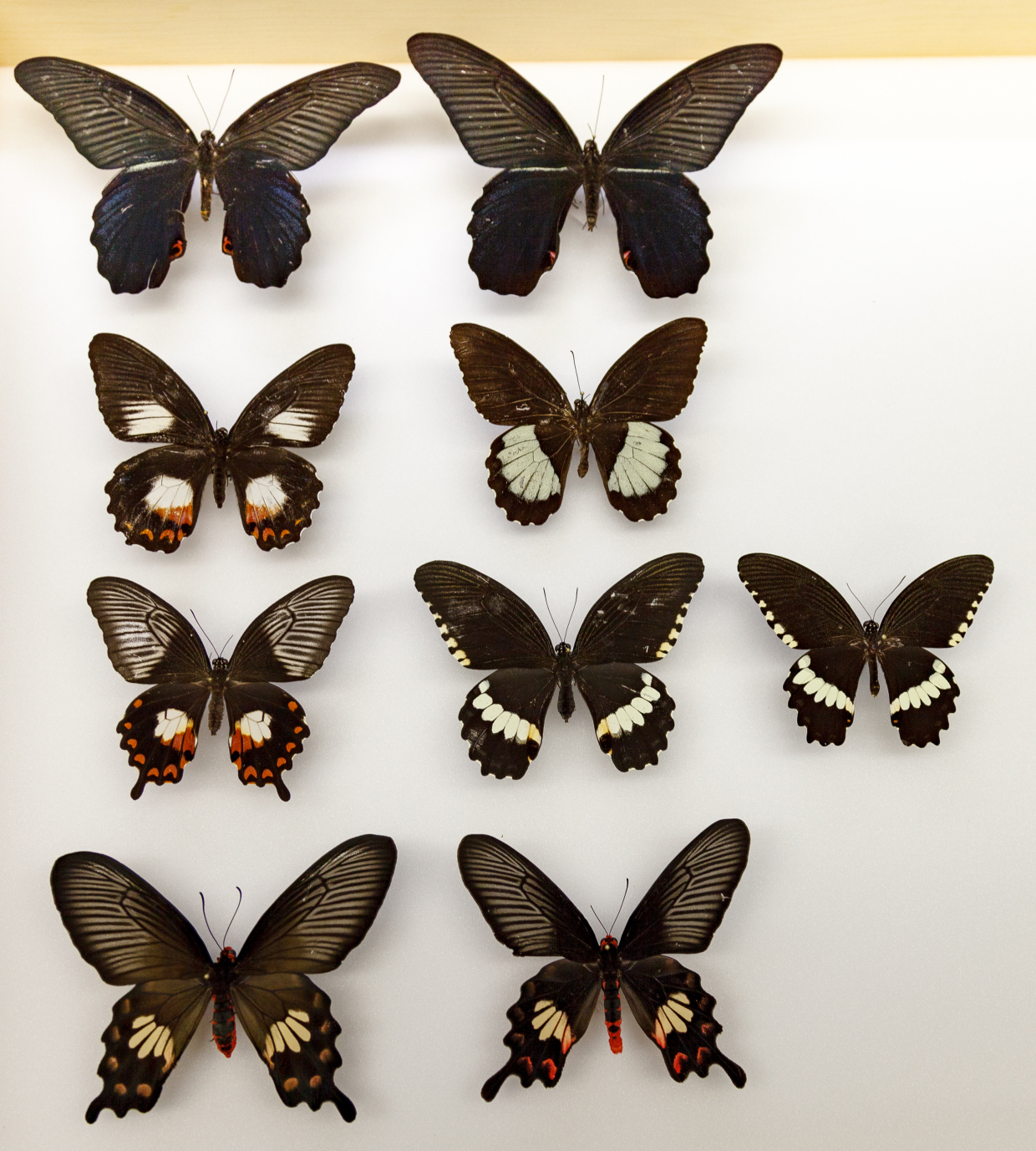 Several different swallowtail butterfly variations showing mimicry and polymorphism, or different forms of the same species. Row 1: A female and male Papilio protenor, the species that is closely related to Papilo polytes, the focal of the new study. In P. protenor, males and female look the same and they do not mimic. Row 2: Papilio ambrax, a species where males and females look different and the female is a mimic. In this species, there is no female polymorphism. The new study shows that its evolutionary ancestor was polymorphic, but females lost that trait and only display the mimetic form. Row 3: Polymorphic Papilio polytes, (L-R) A mimetic female form (one of 3 mimetic forms in this species), a non-mimetic female, and the male. Row 4: A distantly related swallowtail, Pachliopta aristolochiae. This is the toxic species that the species in the new study mimic. (Credit: Matt Wood)

The most closely related species to the P. polytes group, called Papilio protenor, is spread across mainland Asia from India to Japan and did not develop mimicry—both males and females look alike. Other species that spread from the mainland to islands in the Philippines and Indonesia developed three or four distinct forms, a feature known as polymorphism. Still other swallowtail species spread further to Papua New Guinea and the northeast coast of Australia, but those females display only one disguised wing pattern.

The researchers compared the patterns they saw in the genome sequence data to some possible explanations for how these patterns of mimicry developed over time and geography. Did mimicry evolve independently in different species at different points in time? Did it evolve in one species, and then spread through cross-breeding or hybridization?

It appears that mimicry actually has a single ancient origin, when the doublesex gene flipped two million years ago. Since that initial inversion, Zhang and Kronforst did see signs of what’s known as balancing selection. When one type of butterfly becomes more common, predators realize they aren’t toxic and start to feed on them. This reduces the number of that particular butterfly, until another one becomes more common, and so on. Eventually this process balances out and preserves the relative number of each form.

They also saw that some butterfly populations have maintained multiple female forms for millions of years, while others lost the original, undisguised form. Historically, the smallest groups—e.g. the ones that spread the furthest to Australia—lost the polymorphism, allowing random genetic drift and natural selection to weed out the original form.

The researchers also looked at what maintained polymorphism over time. One cause could be sexual selection, that males prefer certain female color patterns over another. Previous research on mating behavior doesn’t back up that idea though. Another possibility is “crypsis,” or the idea that undisguised females blend into their natural surroundings better than the mimics. Kronforst and the team tested that hypothesis by comparing mimetic and non-mimetic females against a green forest background using models for predator (i.e. bird) vision. The non-mimetic, undisguised females actually don’t blend in to the background any more than mimics, so this idea is out too.

Those two findings, combined with the genomic sequence data, led the researchers to start thinking about another intriguing possibility. It could be that the genetic changes that led to mimicry in the first place also built in some long-term disadvantages. When the original doublesex gene inverted, it probably carried a bunch of other unrelated genetic material with it. Since the flipped doublesex gene can’t be recombined with its original version, the extra stuff has “hitchhiked” ever since—and it could have consequences. In fact, some research shows that female mimics don’t live as long as standard ones.

“We think a bunch of differences were accidentally captured when one copy of the gene flipped and became the mimetic copy. Because a lot of those changes are functional, they could be detrimental to health,” Kronforst said.

“The idea is that you have this hardwired disadvantage to mimicry. The standard females don’t have the protection of mimicry, but they also don’t have this inherent genetic cost and these two things offset one another” he said.

Now that they have unraveled some of the history behind the evolution of mimicry, Kronforst said his team wants to start looking for the specific genetic mutations on doublesex that cause different kinds of mimicry.

Adapted (with modifications) from UChicago Medicine ScinceLife, posted by Matt Wood on November 7, 2017.