Congratulations to three UIC scientists with links to CBC for their recent publication in the Journal of Clinical Investigation, “Caspase-11-mediated endothelial pyroptosis underlies endotoxemia-induced lung injury.” The senior author on the paper, Asrar Malik, was a co-organizer of the 2014 CBC Vascular Biology Exploratory Workshop. In addition, two postdoctoral fellows in the Malik lab hold CBC Postdoctoral Awards: publication co-author Kit Man Tsang (2014) and Jeffrey Klomp (2016). Jalees Rehman, the second senior author on the paper is also a co-recipient of a CBC Catalyst Award (2011) together with David Eddington (UIC) and Navdeep Chandel (NU) for the project: “Oxygen Sensing in Endothelial Progenitor Cells.”

Cells lining blood vessels in the lungs that are exposed to bacterial toxins don’t die easy, according to a new study led by researchers at the University of Illinois at Chicago College of Medicine.

When these blood vessel cells come into contact with bacterial toxins called lipopolysaccharides, an explosive form of cell death known as pyroptosis occurs. Pyroptosis is initiated by an enzyme called caspase-11 in mice, and caspases 4 and 5 in humans. Without these enzymes, pyroptosis cannot occur, making these caspases attractive targets for drugs that can prevent tissue damage caused by infections.

“There are multiple ways a cell can die,” said Dr. Jalees Rehman, associate professor of medicine and pharmacology in the UIC College of Medicine and co-lead author on the paper published in the Journal of Clinical Investigation. “In pyroptosis, cells go out with a bang.”

Pyroptosis has only been documented in a few cell types, most notably in immune cells called macrophages. In pyroptosis, an external trigger activates caspases inside the cell, which in turn activate pro-inflammatory molecules called cytokines. As the cell membrane breaks down, the cytokines burst from the cell and signal to nearby immune cells to flock to the area to neutralize germs and prevent further damage. The word ‘pyroptosis’ is derived from the Greek word for fire.

Pyroptosis likely evolved as a useful alarm signal to amplify the inflammatory response by releasing potent cytokines in the setting of an infection. While the burst of cytokines help signal to nearby immune cells that a strong response is needed, in some severe infections cytokines released by pyroptosis can cause excessive tissue injury. 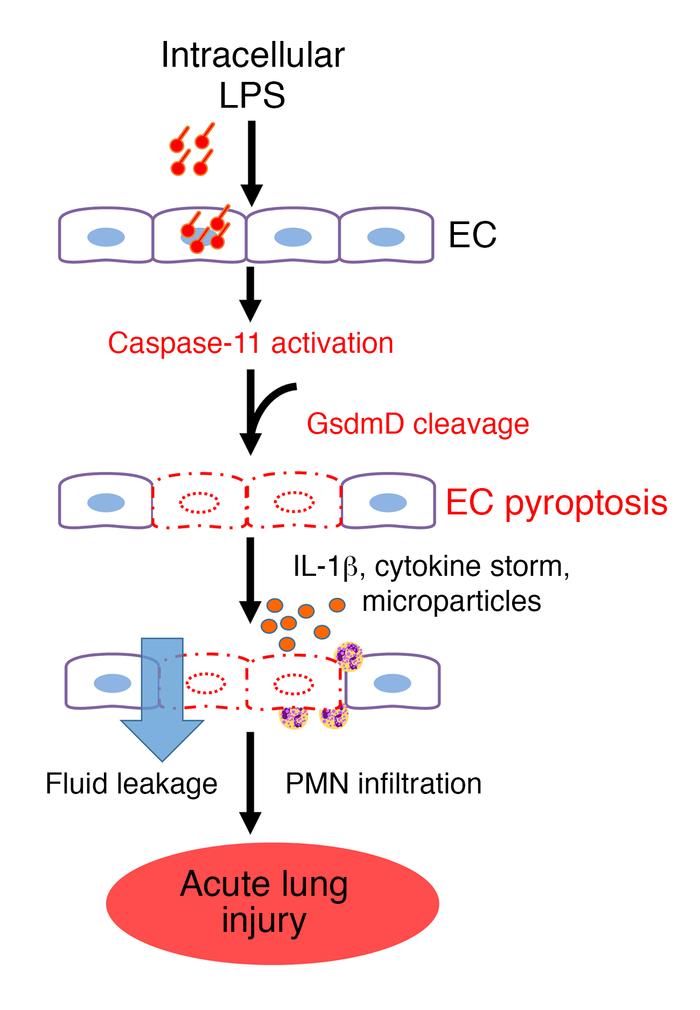 “Our work shows that pyroptosis of endothelial cells that line blood vessels may be one of the reasons why bacterial infections can cause such severe injury to the lung in some patients,” said Asrar Malik, Schweppe Family distinguished professor and head of pharmacology in the UIC College of Medicine and co-lead author on the paper.

Approximately 200,000 people in the U.S. experience acute lung injury each year, and up to 30 to 40 percent of all cases can be fatal. The current standard treatment is supportive care, such as artificial ventilation.

The researchers observed that mice injected with lipopolysaccharide or bacteria that release lipopolysaccharides had very high mortality rates except for mice where the gene for caspase 11 had been deleted in blood vessel endothelial cells. These mice had much higher survival rates and less fluid in their lungs.

“Caspase-11 is clearly required for the activation of pyroptosis in the endothelial cells of mice,” Rehman said. “Drugs that block this pathway or the corresponding human caspases 4 and 5 could help prevent or reduce the extent of lung injury.”

Adapted (with modifications) from UIC today, originally posted on October 9, 2017, by Sharon Parmet.