Aaron Packman, director of Northwestern’s Center for Water Research, and his postdoc, Nanxi Lu, received a CBC Postdoctoral Research Award (2015) for the project: “Using Metabolic Footprinting to Identify Biomarkers for Detecting and Quantifying Biofilm.” Packman’s fascination with water systems and his research, with an angle on “the most efficient and sustainable use of water” are featured in the Northwestern Research News. Congratulations! 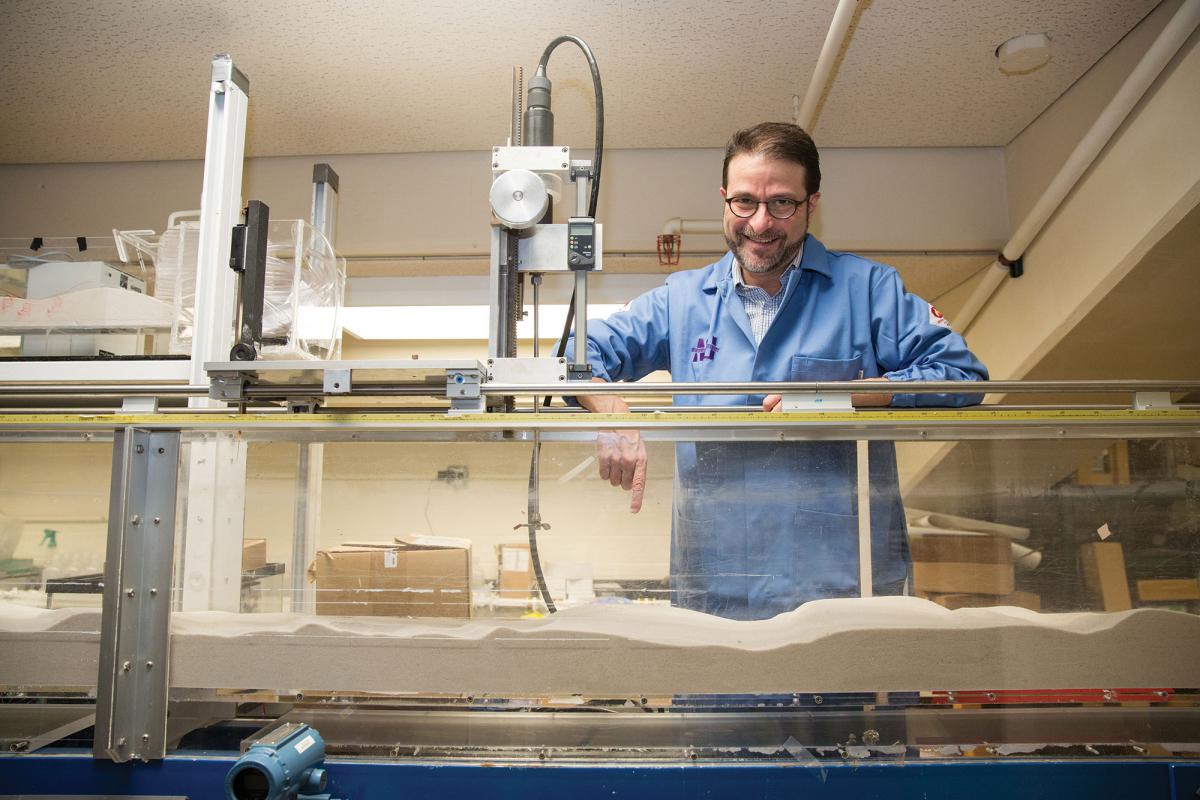 “When it’s something as essential as water, you just can’t afford to have disruptions in your supply.”

For some, a river is a place of quiet reflection. For others, it’s a place of adventure — think rapids and rafting. For Aaron Packman, civil and environmental engineering, a river is a work site. “It’s like a laboratory for me,” he says.

As director of the Center for Water Research at Northwestern, Packman looks at rivers and ponds and sees potential solutions to the water security and sustainability challenges that many communities face.

“When it’s something as essential as water, you just can’t afford to have disruptions in your supply,” he says. “And there have been several recent cases of major disruptions.”

For example, last fall the village of Erie, Illinois, recorded high levels of nitrates in the groundwater, typically the result of contamination from fertilizer. Infants and small children drinking that water could develop “blue baby syndrome,” which causes a decrease in the body’s ability to oxygenate blood and can lead to death.

Packman’s research concentrates on the intersection of natural and engineered water systems, specifically how surface water interacts with groundwater — both primary drinking sources — and how rivers carry sediment and other particulates into other bodies of water. Previously, scientists considered surface and groundwater systems separate structures, but understanding their connections, Packman says, is critical to developing new ways to keep water clean and sustainable without damaging ecosystems. “We have to understand the long-term consequences of substances we release into water bodies and how to prevent the degradation of those bodies,” he says.

Packman’s interest in water began early. Growing up in St. Louis, he was captivated by local water systems, whether it was watching the Missouri and Mississippi Rivers converge or staring out of the car window at the floodplains on road trips.

“I’ve generally been interested in lakes and oceans,” he says, “and I used to hike through the woods for good views of the river. We’d also go swimming and canoeing in the Ozarks, which have extremely beautiful spring-fed waters. The water tumbling over the rocks and the rapids … so dynamic, so complex. I still feel that fascination.”

Later, he studied mechanical engineering, focusing on hydrodynamics and aerodynamics, before spending about four years working in the aerospace industry. Ultimately, he decided that a large, industrial work environment was not for him.

At Northwestern, Packman has brought a detailed, multiscaled, quantitative analysis to hydrology. Starting with sediment transport, he researched how fine particles interact with coarser riverbed sediments as both travel downstream. Later, he collaborated with microbiologists, including Matt Parsek (now at the University of Washington) and engineering sciences and applied mathematics chair David Chopp to understand how those processes could help tackle microbial systems, an area of study that includes waterborne diseases.

“Long-term discussions with colleagues and access to the core facilities at Northwestern are really important because they let us jump into the work and attain a high level of capability very quickly,” Packman says.

His affinity for cross-disciplinary research is what led Packman to become director of Northwestern’s Center for Water Research. Launched in March 2016, the center works to catalyze water research collaborations across academic units, including the Institute for Sustainability and Energy at Northwestern, the Northwestern University–Argonne National Laboratory Institute of Science and Engineering, and the Pritzker School of Law’s Environmental Advocacy Center.

The center is also a major partner of Current, a nonprofit consortium developed with support from World Business Chicago that brings together the region’s top thought leaders on water security and sustainability across industrial, academic, government, and community sectors. Packman will be an asset in developing solutions to the Chicago area’s water needs, says Seth Snyder, chief scientist at Current and leader of the water initiative at Argonne.

The center is also working with Northwestern’s Crown Family Center for Jewish and Israel Studies to examine Israel’s world-leading desalination technology and national water reuse program, which has helped double that country’s water supply but also has led to contamination concerns. Packman says such efforts are merely the start for a wealth of future research.

“There isn’t an endpoint,” he says. “We’re always going to need water, so the research objective is aiming for the most efficient and sustainable use of water. It’s a really complex, global problem and there’s a huge amount to do.”