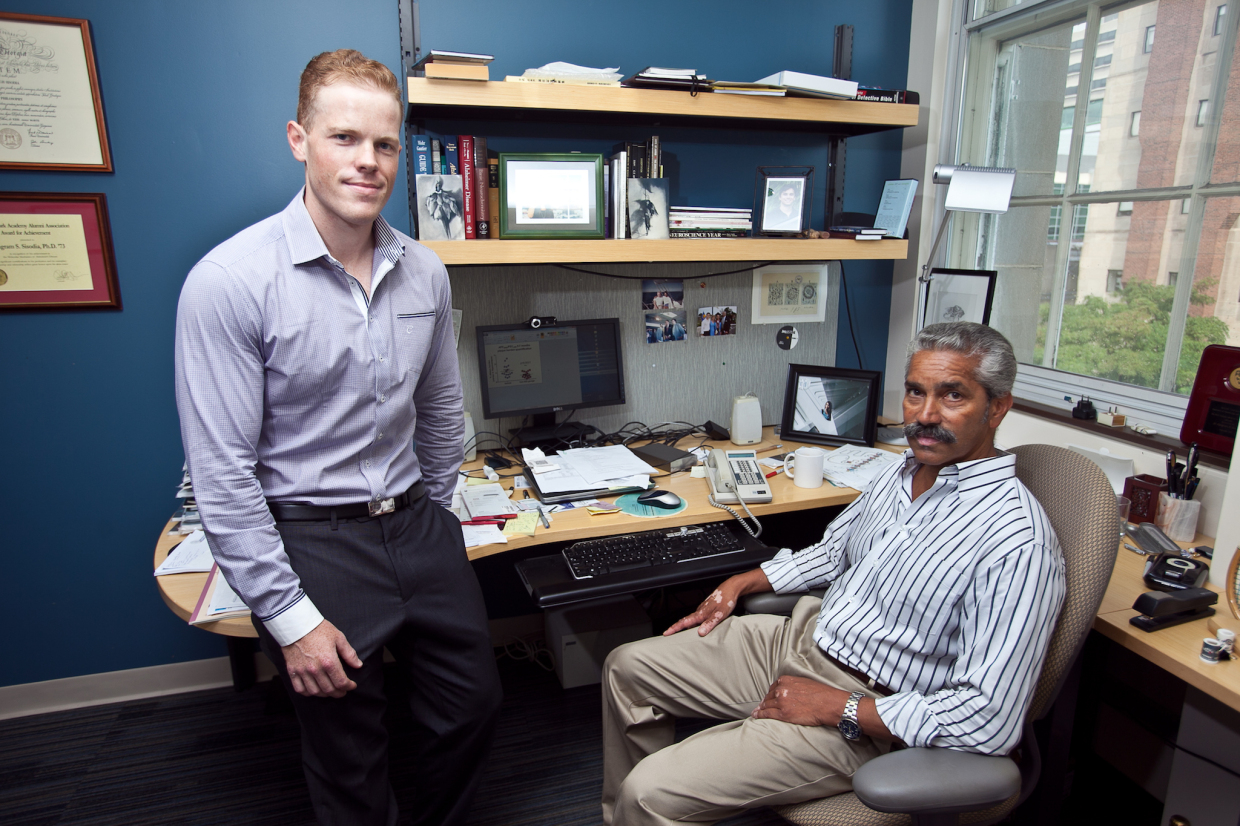 Mice that received high doses of broad spectrum antibiotics over five to six months had a two-fold decrease in amyloid-ß (Aß) peptides in the brain, the “plaques” or that build up and play a central role in the onset of Alzheimer’s. They also had altered inflammation of microglia, brain cells that perform immune system functions in the central nervous system.

Of course, this doesn’t mean antibiotics could be a “treatment” for Alzheimer’s disease. There may be changes occurring in the brain and central nervous system 15 to 20 years before diagnosis, and administering antibiotics for more than a few weeks to treat an infection is a bad idea anyway. But what was intriguing about that study is what it suggested about how microbes might be interacting with the brain and nervous system.

When the team analyzed the gut bacteria of the mice, they saw dramatic changes in the overall diversity of the community of microbes. Some species of bacteria were wiped out, while others thrived. A growing body of research shows how gut bacteria interact with the immune system and brain through the periphery of the nervous system. Sisodia and Minter believe that the changes they saw in the microbiome of these mice could somehow be linked to the changes in the brain—and a new study shows that the timing of when antibiotics are given may mean everything.

In a new study just published in Scientific Reports, they performed similar experiments, but instead of giving the mice antibiotics long-term, they did it for just one week when the mice were only two weeks old. The results, again, were surprising: They saw all the same changes in Aß plaques, microglia activity and gut bacteria diversity, although to a slightly lesser extent.

“The most staggering part for me was after giving one week of antibiotics very early on, we see the expansion and contraction of various strains of bacteria,” said Minter, who is a postdoctoral scholar. “But the fact that it seems to be the developmental window that can have these long-lasting effects in this mouse model is pretty exciting, and something we certainly weren’t expecting.”

Video: Sangram Sisodia and Myles Minter talk about the relationship between the microbes living in your gut and your brain, for Argonne’s Microbiome Project.

This early developmental period is believed to be crucial for the proper development of the gut microbiome, and an early blow can lead to long-term consequences. For example, earlier this year, Eugene Chang’s team showed that giving antibiotics to mice during pregnancy can increase the risk for their offspring developing a form of inflammatory bowel disease.

These changes can go both ways though. In 2015, Cathy Nagler and her team showed that probiotic formula for babies can help reverse allergies to cow’s milk by replacing certain gut bacteria.

Sisodia said that his team’s work paves the way for more experiments to understand the exact mechanisms behind how the changes in gut microbes might be related to changes in microglial nerve cells and their ability to clear plaques. Minter is working on genetic experiments to understand the molecular changes taking place that could be affecting signals between gut bacteria and the immune and nervous systems, and the group is looking at more ways the timing of antibiotics play a role as well.

“We need to design experiments where we treat animals later in life, either before they develop amyloid deposits or right about the time they do,” said Sisodia, the Thomas Reynolds Sr. Family Professor of Neurosciences. “In Alzheimer’s, the ability to clear amyloid plaques is reduced. We think microglia play a central role in that, and we want to identify what could be changing in their metabolism early in life that could be priming these cells to do their job.”

Adapted (with modifications) from UChicago ScienceLife, posted on September 15, 2017 by Matt Wood in At the Bench.

▸ From molecule to medicine: pursuing insight and new treatment for Alzheimer’s disease
Posted on September 19, 2017 by David Arndt in Sidebar / UChicago ScineceLife