Can we keep them in Chicago?

Two recent articles in Crain’s Chicago Business feature three CBC-linked entrepreneurial researchers who chose to take their CBC-university spin-offs to the Coasts, but also hope to retain links with Chicago

It’s hard to dispute the superiority in both infrastructure and experienced leadership on the East and West Coasts as compared with the Midwest and the Greater Chicago Region when it comes to supporting entrepreneurial researchers in their efforts to establish successful biotech start-ups. The Chicago Biomedical Consortium (CBC) and other Chicago-based organizations remain committed to closing these gaps. And the winds are shifting as the growing effort to retain the entrepreneurial talent in the Midwest is beginning to take hold.

Two recent articles published in Crain’s Chicago Business written by John Pletz (see below for the details), feature a trio of CBC affiliates who have successfully launched spinout companies; all of whom decided to relocate all or part of their companies to the Coasts. In his first article, Pletz discusses the current status and “fate” of two recent CBC-member university startups: UChicago-born Pyxis Oncology, a cancer-therapy company to be based in Boston with a small office located in Chicago, and an early stage NU-born “virtual company”, yet to be named, to be located in Chicago but likely managed by a San Francisco-based CEO. Pyxis Oncology evolved from research done in the lab of Thomas Gajewski, a UChicago professor and world-class researcher in the field of cancer immunotherapy. The “virtual company”, based on years of work by Lyrica-developer Richard Silverman, NU, is focused on new compounds with the therapeutic potential to treat neurodegenerative diseases such as Alzheimer’s, Parkinson’s, Huntington’s and Lou Gehrig’s diseases, as well as cancer and cerebral palsy.

Ties to the Chicago Biomedical Consortium

The three entrepreneurial researchers highlighted in Pletz’s articles have multiple ties to the CBC (see details below). They have presented their research at the CBC educational events (Silverman, Glick), won CBC Awards (Silverman, Gajewski) and have served on the CBC review boards (Glick). Of special interest, in the context of this article, is the recent CBC Accelerator Award that Silverman won in 2018 for the project: “Novel Drug for Hepatocellular Carcinoma.” The CBC Accelerator Award program, which funds early stage translational research, is one of the newest additions to the repertoire of the CBC Award programs. Since embarking on its Phase 2 agenda in 2017 which built upon the solid base of 10 years of sponsoring basic biomedical science, much of the current CBC effort is now centered on enhancing the translational and commercial potential of university-based innovations originating from its member institutions. Investigators such as Silverman and Gajewski are prime examples of the target applicant pool for such programs.

Since 2006-2019, the Searle Funds at The Chicago Community Trust – the primary sponsor of the organization – has awarded $65 million to the CBC. The funds have been used to support biomedical research within the greater Chicago area, primarily at member institutions Northwestern, UChicago and UIC. As of July 2019, the CBC had issued 320 Awards supporting cutting-edge research in many areas including antibiotic resistance, cancer, heart disease, drug discovery, mental health and neurological disorders, and diabetes, which by now have resulted in over 2400 peer-reviewed publications linked to CBC-funded research. Chicago is perhaps unique to boast about the establishment of six national research centers at CBC universities, all leveraged by the CBC funding. CBC has also facilitated the Open Access Initiative, a one-of-its-kind mechanism allowing CBC-affiliated researchers to use all core facilities at “in-house” rates across the three institutions. In addition, through the 2014 CBC Infrastructure Awards, three state-of-the-art instruments were acquired for each of the CBC university core facilities to enable ground-breaking investigations of key biomedical questions.

Finally, CBC-initiated research has resulted in over $702.2 million in follow-on funding, primarily in federal grants, to Chicago universities which has produced an estimated total economic impact of over $2.5 billion for the Chicago economy.

During its first decade, the CBC also helped to recruit (and retain in Chicago) two outstanding CBC Senior Investigators, geneticist Kevin White (recruited to UChicago from Yale; currently a leader of the Chicago-based biotech “unicorn” Tempus) and proteomics expert Neil Kelleher (recruited to NU from UIUC). In addition, the CBC aided in recruitment of six Junior Investigators (from Harvard, Princeton, Rockefeller, Stanford, Southwestern Medical Center in Dallas and University of Michigan), two at each of the three CBC schools. All six remain vital contributors to the Greater Chicago biomedical/biotech community.

The CBC Scholar Award program supported 44 graduate students at the three CBC institutions between 2010 – 2016. All 44 Scholar alumni have moved on to work in academic and industry positions locally, nationally and internationally. Currently, 32% of past Scholars are in diverse positions within the Chicago metropolitan area. Within this group, a number of Scholars are either continuing their postdoctoral research or are now faculty members at one of the CBC universities. Others have taken positions with local biomedical research companies, i.e. Abbott, Pfizer, Sg2, Celgene and Astellas. 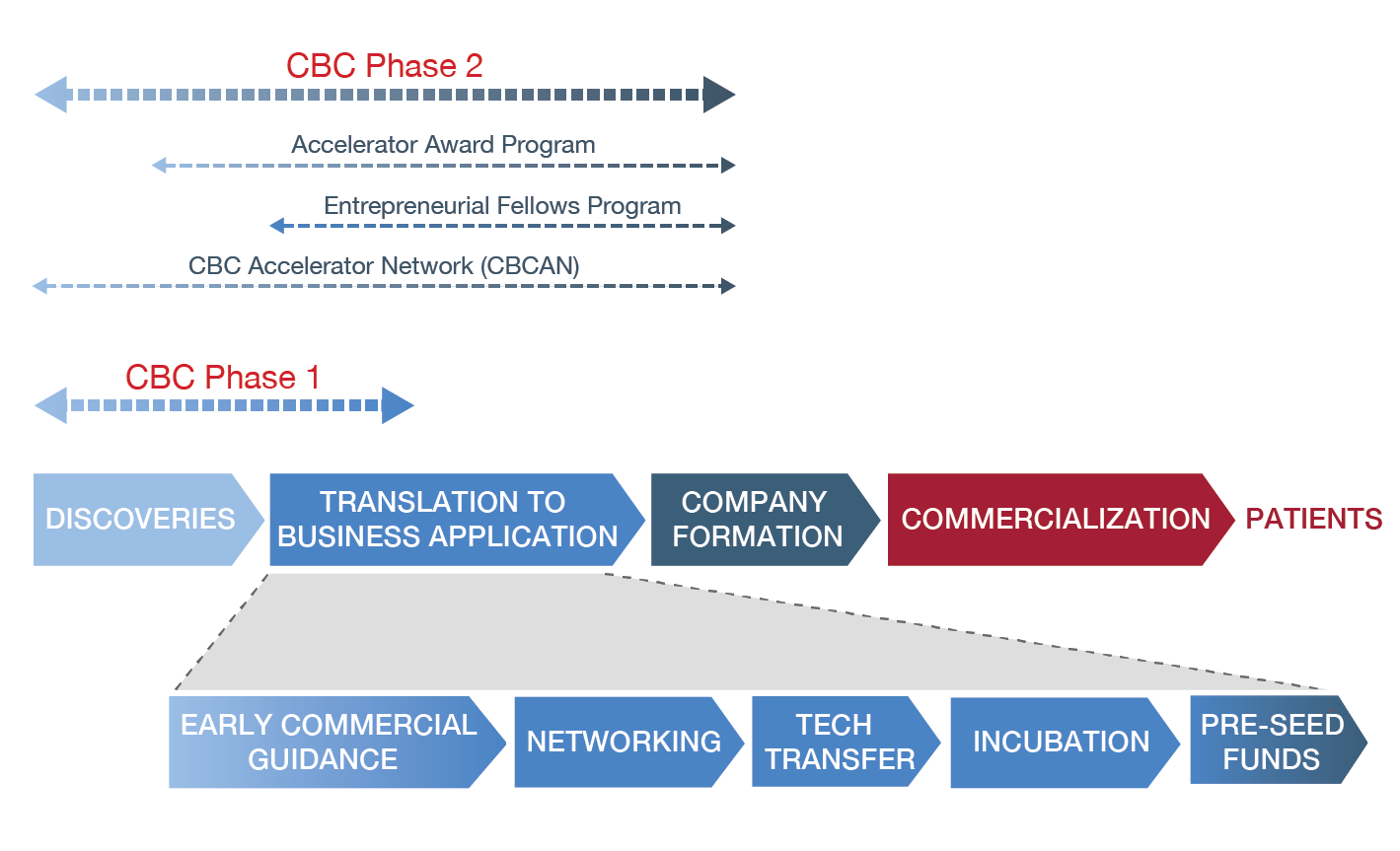 The three new CBC Phase 2 programs, although still in the early stages of the more translational mission to elevate Chicago as a biomedical/biotech hub, are gaining momentum. The aforementioned CBC Accelerator Award program supports translational research and provides university researchers with “early commercial guidance.” These awards are to be used to support the earliest, and therefore, highest-risk stage of commercially-directed research focused on the development of a therapeutic or an associated biomarker or diagnostic. Nine awards have been made to date; an additional four are awaiting administrative processing. The Accelerator Awards are up to $100,000 for one year and projects that meet proposed milestones are eligible to apply for $150,000 for an additional year.

Launched in Spring 2019, the CBC Entrepreneurial Fellows program identifies and supports the professional development of academic biomedical researchers who are keen to develop the skills needed to move translational projects from a university lab towards commercialization. Working with CBC staff and faculty, Fellows will help develop and implement CBC-funded projects focused on translational research, including Accelerators. In addition, Fellows will support the diverse mechanisms through which CBC universities attempt to accelerate translation of their biomedical discoveries that have therapeutic and commercial potential. The CBC welcomed the first Entrepreneurial Fellow in April 2019: Eric Schiffhauer, PhD, who arrived to join the CBC from John Hopkins University. The second Entrepreneurial Fellow, Carissa Heath, PhD from Northwestern is expected to begin later this fall.

The “glue” of the Phase 2 programs is the CBC Accelerator Network (CBCAN). CBCAN has become an important hub for the community and regularly brings together academic and industry scientists to present and discuss ideas for commercialization. Entrepreneurial-minded faculty, postdoctoral fellows, graduate students, industry experts, technology transfer officers and other members of the greater Chicago biomedical ecosystem gather at CBCAN meetings to build a stronger community, exchange ideas, and educate academic researchers about market realities. The goal of multiple CBCAN meetings each year is to provide community input for the Accelerator Award and the Entrepreneurial Fellows programs. In addition, the CBCAN hosted recently two fireside chats with highly entrepreneurial scientists: Jigar Raythatha, CEO, Constellation Pharmaceuticals, and Joe Moskal, Chief Scientific Officer of Aptinyx and Professor and Director of the Falk Center for Molecular Therapeutics, NU. Both meetings were standing-room-only packed with entrepreneurial-oriented Chicago researchers. To date, thirteen CBCAN meetings have been held in Chicago.

The CBC has been also shaping its educational events to support commercialization. In Spring 2019, two brand-new translational science-oriented courses were offered: “Commercialization in Context: Life Sciences,” taught by James Conley from the Kellogg School of Management, in a collaboration between the CBC, the Graduate School (TGS) at NU and Kellogg, and a CBC- sponsored “Preclinical Safety Assessment and Mitigation Strategies in Drug Discovery,” taught by industry veteran Bryan Norman.

In his articles, Pletz argues that ‘what we lack here in Chicago is the startup-lab infrastructure’ and ‘the CEO piece’. Perhaps the CBC “talent development and retention” efforts are an early step in addressing the gap and creating a “Third Coast” biotech hub — a vision that the late Chicago philanthropist Dan Searle, who dreamed up the CBC, had for the region. But others are also beginning to recognize and support the local potential: Northwestern’s Innovation and New Ventures (INVO), UChicago’s Polsky Center for Entrepreneurship and Innovation and the new Discovery Partners Institute (DPI) at the University of Illinois have all made significant impact in advancing technology from the community, including biotechnology, toward commercial realization. MATTER, with whom CBC has partnered in the Chicago Innovation Mentors (CIM) program in the past, now has a healthcare/biotechnology emphasis as well. In July 2019, Rosalind Franklin University of Medicine and Science announced the opening of Helix 51, Lake County’s first bioscience incubator. UChicago has plans for a new Institute for Chemical Biology and Molecular Therapeutics and is also planning to build a new lab space in Hyde Park. The Chicago Biomedical Innovation Alliance (CBIA) was founded in 2019 as a collection of non-profit organizations dedicated to accelerating transformative scientific discoveries here in Chicago. And, partially with CBC assistance, two new translators — partnerships with Deerfield Management — were opened at NU (Lakeside Discovery; Spring 2018) and UIC (West Loop Innovations; Spring 2019). Also, other local biotech, such as ClostraBio and WiseGene are going strong — and both have ties to the CBC.

‘“I’m hoping this can be an early seed of biotech here [in Chicago],” the 57-year-old [Gajewski] says of Pyxis [for Crain’s]. “We want to grow that (ecosystem). But it’s going to happen, probably over the next 10 years.”’ Perhaps the CBC can help Chicago beat that timeline.

▸ Will these startups help biotech take root in Chicago?
This has long been a pharma town because of drugmakers Abbott, Baxter and Searle. But it’s never been a startup hotbed the way that Boston has been. Several upstarts—including this U of C spinout—aim to change the odds.
By John Pletz, published in Crain’s Chicago Business, August 9, 2019.

▸ U of C software spinout SnapGene is acquired
The startup came from a professor’s need to streamline complicated research procedures.
By John Pletz, published in Crain’s Chicago Business, August 13, 2019.