Congratulations to the He lab at UChicago for their recent publication in Nature. Using melanoma tumor mouse model, the authors show that inhibition (or a complete knock-out) of a protein known as YTHDF1, discovered by Chuan He a few years ago, results in the lowering of proteases the levels of that destroy antigens in dendritic cells and thus enhances the antigene processing and presentation to T cells. Such ‘sensitized’ antigen presentation, when used hand-in-hand with other modes of chemotherapy, significantly improved the ability to control the tumors in mice (from 40% to almost 100%). The newly discovered pathway appears promising for human cancer therapeutic applications and the authors expect to enter clinical trials within one year. Chuan He has been very active in the CBC community and is a recipient of many CBC awards (see the notes after the article). Most recently (2018), Chuan received an inaugural CBC Accelerator Award for the project “A Highly Sensitive and Robust Test for Early Colorectal Cancer Diagnosis.” 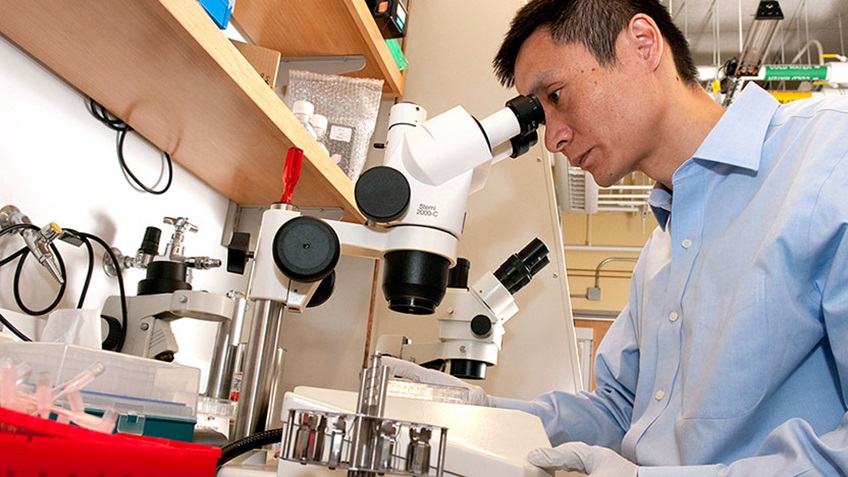 Chuan He, PhD, the John T. Wilson Distinguished Service Professor in chemistry, biochemistry and molecular biology, and the Institute for Biophysical Dynamics at the University of Chicago. (Source: UChicago Medicine Forefront)

Cancer immunotherapy—an approach that removes the barriers that protect cancer cells from a patient’s immune system—has revolutionized the treatment of many cancer types. About 40 percent of melanoma patients, for example, respond to immunotherapy, enabling the immune system’s T cells to attack cancer cells and take control of the disease.

In a study published in the February 6, 2019 issue of Nature, a University of Chicago-based team working in collaboration with scientists at Tsinghua University and the Chinese Academy of Sciences, demonstrates, in mice, that they can boost the tumor control rate from around 40 percent up to nearly 100 percent by opening up a parallel pathway.

This study relies on manipulating these cells, which are a crucial component of the immune system. The primary function of dendritic cells is to process antigens and present them to T cells. They act as messengers, connecting the innate and the adaptive immune systems.

But a protein known as YTHDF1 influences antigen processing by dendritic cells. This protein was discovered and characterized in 2015 by Chuan He, PhD, the John T. Wilson Distinguished Service Professor in chemistry, biochemistry and molecular biology, and the Institute for Biophysical Dynamics at the University of Chicago. YTHDF1 controls the level of proteases that destroy potential tumor antigens. This limits their presentation to T cells.

These limits were a problem, He said. But when he and his colleagues eliminated YTHDF1, the dendritic cells increased their ability to engulf peptides, degrade them and present them to T cells. This opened up a new and potentially effective approach to treatment of cancer in patients who do not respond well to checkpoint inhibitors.

“Once we combined YTHDF1 knock-out with the checkpoint inhibitor anti PD-L1, we got almost complete tumor control in a mouse model,” He said. Instead of a 40 percent response, nearly 100 percent of treated mice with melanoma responded to anti-PD-L1.

Together with gastroenterologist Marc Bissonnette, MD, associate professor of medicine at the University of Chicago, He’s team performed an additional test using biopsies from human patients with colon cancer, a disease that is much less responsive to immunotherapy than melanoma. They found that tissue from patients with high levels of YTHDF1 had limited T cell infiltration, but patients with low levels of YTHDF1 had more T cell infiltrates. “This suggests that humans correlate nicely with our mouse data,” He added.

“An important question in cancer treatment is ‘how could we get better antigen presentation?’” according to co-author Ralph Weichselbaum, MD, the Daniel K. Ludwig Distinguished Service Professor and chairman of radiation oncology at the University of Chicago. “This study opens a lot of doors,” he said. “It provides a whole new set of targets to the immune system, ranging from new sets of antigens to potential anti-cancer vaccines. This is the type of cross-divisional, interdisciplinary collaboration that could lead to unexpected discoveries.”

This supports the notion that reduced YTHDF1 often coincides with the T cell inflamed tumor microenvironment, which is crucial for successful immunotherapy, the authors note. YTHDF1 could be a therapeutic target for immunotherapy in combination with emerging checkpoint inhibitors or dendritic cell vaccines.

“It will be really interesting to test how the human system works with potential dendritic cell vaccines or small molecule inhibitors that can suppress the activity of YTHDF1 in human cancer patients,” according to corresponding author Meng Michelle Xu, PhD, a former member of the He and Weichselbaum laboratories.

“We have not yet seen any measurable toxicity, as far as we can tell, related to knocking down YTHDF1 in mice,” He added. “At this point, this appears to be a very benign system. We hope to begin early testing in patients within one year.”

Source:
Adapted (with modifications) from the UChicago Medicine Forefront, by John Easton, published on February 6, 2019.