Could an ancient bacterial toxin, once integrated into a multicellular organism, have evolved into adhesion molecules that guide neuronal development and function? A story of teneurins, by a twice CBC awardee, Demet Araç-Özkan, UChicago

A collaboration between UChicago and Stanford University has recently led to a discovery of teneurins – a class of proteins involved in cell adhesion in the nervous system. To the surprise of the investigators, the structure revealed striking similarity to a bacterial toxin. The authors present a fascinating scenario how evolution might have played a role in adapting this bacterial protein and its isoforms, derived by alternative splicing, to a variety of distinct tasks including embryonic development, neuronal guidance and synaptic activity. Senior author on the paper which was recently published in Cell, is Demet Araç-Özkan, UChicago. She is a twice CBC award recipient: in 2016 she received CBC HTS and CBC Postdoctoral Research Awards. Congratulations! 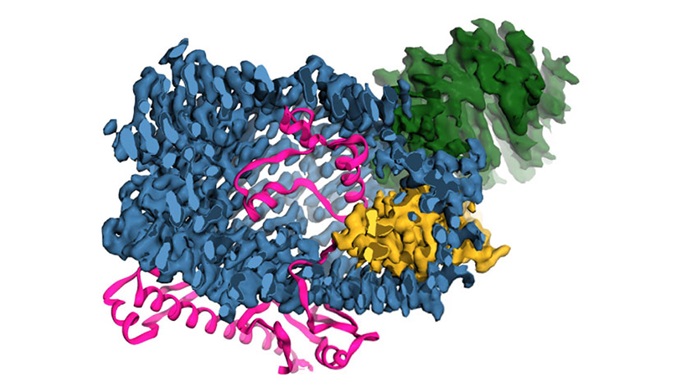 A protein that plays an important role in embryonic development and nervous system wiring in humans appears to have been borrowed from bacteria. In a study published April 19, 2018, in Cell, scientists from the University of Chicago and Stanford University describe the three-dimensional structure of proteins called teneurins for the first time.

Proteins play a crucial role in helping cells communicate with each other. Teneurins sit on the surface of cells and bind to other proteins on the surface of other cells. They’re involved in several processes, including embryonic development, guiding nerve cell axons to the right place to make connections with other nerve cells, and helping these connections, or synapses, form.

Instead of resembling other proteins that perform similar functions, however, the structure of teneurins most closely matches that of a bacterial toxin. This is the only known human protein with such a structure.

“There are many proteins on the cell surface that are important for adhesion, and they all have characteristic structures. But until now, we had no idea what these teneurins looked like,” said Demet Araç, PhD, assistant professor of biochemistry and molecular biology at UChicago and senior author of the study. “No other eukaryotic protein was similar to this, so its resemblance to a bacterial toxin is unusual.”

Based on its genetic sequence, researchers had an inkling that teneurins resembled bacterial toxins, poison molecules bacteria use to attack and comprise host cells. Araç and Georgios Skiniotis from Stanford used high-resolution electron microscopy to define the structure of the human version of the teneurin protein. When they compared it to reference databases of other protein structures, it most closely resembled a bacterial toxin with a barrel shape and propeller-like protrusion. 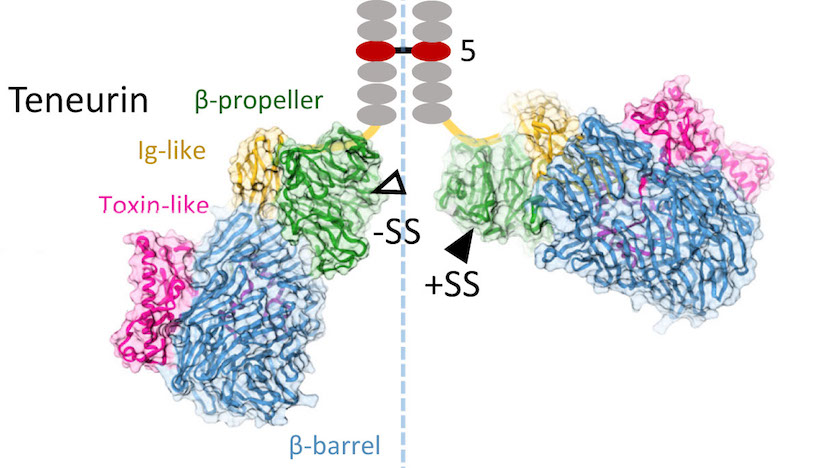 This toxin may have been incorporated into multicellular organisms very early in evolutionary history. Choanoflagellates, one of the earliest single-celled organisms believed to evolve into multicellular eukaryotes, have a teneurin-like protein. It’s likely that bacteria transferred some of their genes to early choanoflagellates, which co-opted them for their own genomes. As these simple creatures evolved into more complex species, the original toxin-like protein has been conserved ever since.

Once the structure was resolved, Araç and her colleagues also wanted to understand how teneurins perform so many different functions during development and in the nervous system. They suspect it may have something to do with its similarity to the toxin—perhaps it borrows some of the same tools bacteria use to infect cells and employs them to attach to and communicate with other cells instead.

A genetic process called alternative splicing may also help teneurins perform their various tasks. Alternative splicing, or differential splicing, is a process that results in a single gene coding for multiple proteins. During this process, small segments of a gene called exons may be included or excluded in the final messenger RNA (mRNA) produced from that gene. These different mRNAs in turn translate into alternate versions of proteins that can perform various functions.

Araç and another collaborator from Stanford, Thomas Südhof, generated two different, alternatively spliced teneurins and tested their functionality. Just a tiny discrepancy—seven out of 2,500 amino acids—made a difference. One version of the teneurin lacking seven specific amino acids could adhere to a cell receptor that is important for signaling between cells. Another version of the teneurin that includes those seven amino acids couldn’t adhere to this receptor. Instead, it promoted formation of synapses between nerve cells. 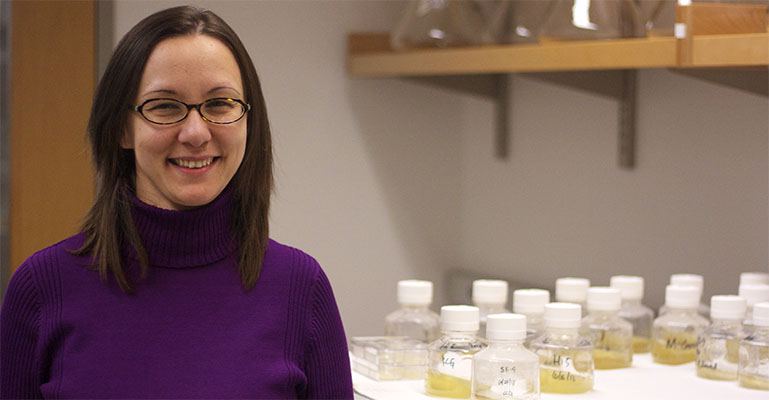 “Usually there are different proteins that do different things in the nervous system. One does axon pathfinding, another one does synapse formation, another does brain development, etc.,” Araç said. “This is one explanation for how teneurins do so many different things, by using different, alternatively-spliced isoforms.”

Now that the structure of teneurins is clear, Araç says she and her postdoctoral scholar, Jingxian Li, PhD, one of the lead authors of the study, want to continue working to understand how these proteins carry out their many different roles.

“It is still very surprising that we have these molecules from bacteria in our brain and nervous system, and yet we still don’t know much about what they are doing,” she said. “Humans are invaded by all these bugs. We are not just human.”

The study, “Structural basis for teneurin function in circuit-wiring: A toxin motif at the synapse,” was supported by the National Institutes of Health. Additional authors include Moran Shalev-Benami from Stanford University; Richard Sando, Xian Jiang and Jie Wang from Stanford and the Howard Hughes Medical Institute; and Amanuel Kibrom, Katherine Leon, Christopher Katanski, Olha Nazarko, and Yue C. Lu from the University of Chicago.

Adapted (with modifications) from UChicago Medicine, The Forefront, by Matt Wood, published on April 19, 2018.