UIC collaborates with a French biotech company to reveal the mechanism of action of recently discovered antibiotics. Past CBC awardee, Alexander Mankin, UIC, in the spotlight.

A new class of bactericidal antibiotics, called odilorhabdins, or ODLs, has recently been discovered by a French biotech company, Nosopharm. To gain insight into the mechanism of the biocidal action of the ODLs, the company reached out to two renown experts in the field — Alexander Mankin and Yury Polikanov, UIC. The results of their collaboration are published in this month’s issue of the Molecular Cell. The authors report that the ODLs bind to a novel site of the bacterial ribosome, leading to a scrambled production of defective proteins that eventually kill the pathogen. Because of their unique mechanism of action, the ODLs could be useful to fight hard-to-treat infections, especially those that are resistant to the currently used antibiotics. Mankin is a past CBC awardee (Spark Award, 2009). He also served on a Spark Review Panel and was an invited speaker at the 7th CBC Annual Symposium (2009), “The Biology of Non-Coding RNAs: Old Molecules, New Actions.” Congratulations to all researchers involved in this potentially ground-breaking study from an industry-academia collaboration.

A new class of antibiotics to combat drug resistance 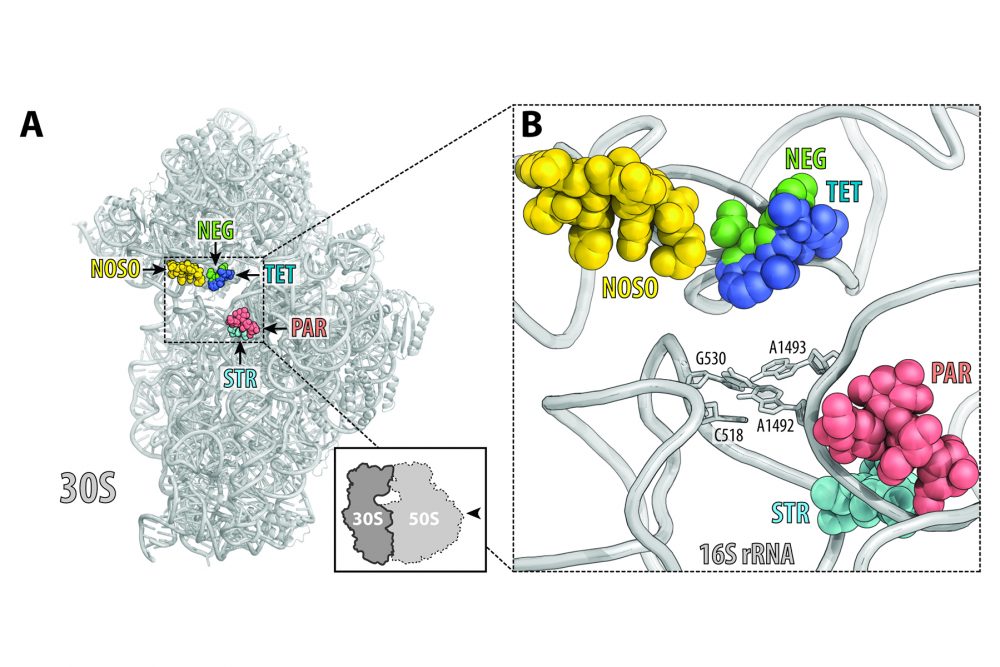 ODLs (yellow) bind to a site on the ribosome not used by other antibiotics. Location of this site is shown here relative to the sites of other known antibiotics, such as negamycin (green), tetracycline (dark blue), aminoglycoside antibiotic paromomycin (red) and streptomycin (light blue).

Researchers from the University of Illinois at Chicago and Nosopharm, a biotechnology company based in Lyon, France, are part of an international team reporting on the discovery of a new class of antibiotics.

The antibiotic, first identified by Nosopharm, is unique and promising on two fronts: its unconventional source and its distinct way of killing bacteria, both of which suggest the compound may be effective at treating drug-resistant or hard-to-treat bacterial infections.

Called odilorhabdins, or ODLs, the antibiotics are produced by symbiotic bacteria found in soil-dwelling nematode worms that colonize insects for food. The bacteria help to kill the insect and, importantly, secrete the antibiotic to keep competing bacteria away. Until now, these nematode-associated bacteria and the antibiotics they make have been largely understudied.

To identify the antibiotic, the Nosopharm research team screened 80 cultured strains of the bacteria for antimicrobial activity. They then isolated the active compounds, studied their chemical structures and engineered more potent derivatives.

The study, published in Molecular Cell, describes the new antibiotic and, for the first time, how it works.

UIC’s Alexander Mankin and Yury Polikanov are corresponding authors on the study and led the research on the antibiotic’s mechanism of action. They found that ODLs act on the ribosome — the molecular machine of individual cells that makes the proteins it needs to function — of bacterial cells. 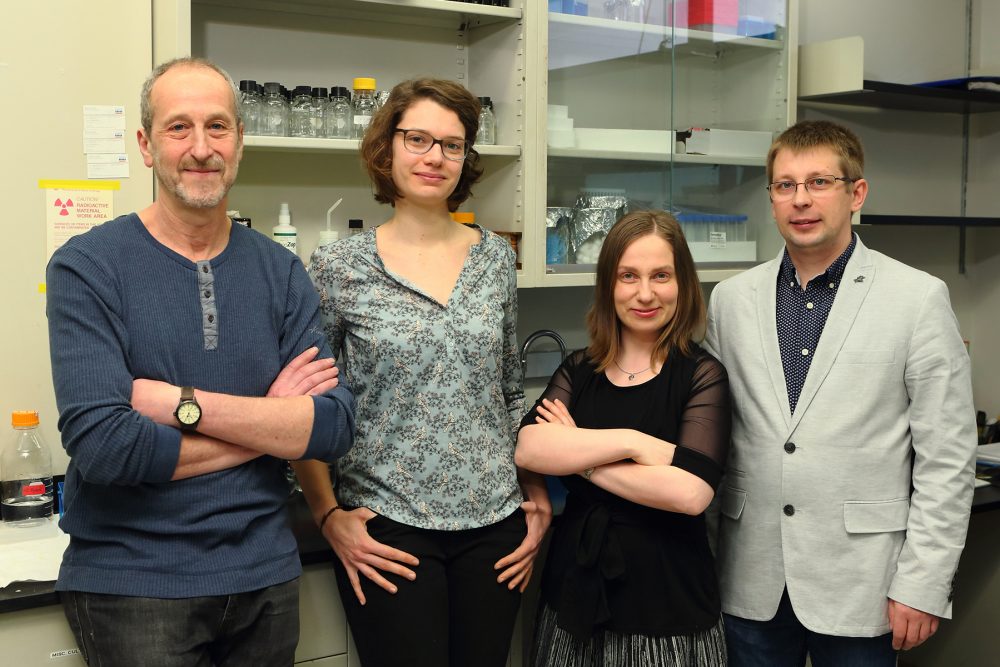 “Like many clinically useful antibiotics, ODLs work by targeting the ribosome,” said Polikanov, assistant professor of biological sciences in the UIC College of Liberal Arts and Sciences, “but ODLs are unique because they bind to a place on the ribosome that has never been used by other known antibiotics.”

The UIC researchers, including graduate student Tanja Florin and postdoctoral research associate Malgorzata Dobosz-Bartoszek, also found that when bound to the ribosome, the antibiotic disrupts its ability to interpret and translate genetic code.

“When ODLs are introduced to the bacterial cells, they impact the reading ability of the ribosome and cause the ribosome to make mistakes when it creates new proteins,” said Mankin, director of the Center for Biomolecular Sciences in the UIC College of Pharmacy. “This miscoding corrupts the cell with flawed proteins and causes the bacterial cell to die.”

“The bactericidal mechanism of ODLs and the fact that they bind to a site on the ribosome not exploited by any known antibiotic are very strong indicators that ODLs have the potential to treat infections that are unresponsive to other antibiotics,” said Mankin, who is also professor of medicinal chemistry and pharmacognosy.

According to the World Health Organization, antibiotic resistant is one of the biggest threats to global health today and a significant contributor to longer hospital stays, higher medical costs and increased mortality.

In France, the Nosopharm researchers tested the ODL compounds against bacterial pathogens, including many known to develop resistance.

Carbapenem-resistant Enterobacteriacae, or CRE, are a family of germs that have high levels of resistance to antibiotics — one study suggests that CRE, which are the common culprits in bloodstream and surgical site infections, contribute to death in up to 50 percent of patients who become infected.

The researchers say this study is a testament to the growing trend of international and cross-disciplinary collaboration, which is needed to combat the growing and global threat of antibiotic resistance.

“In this case, the combined expertise of the industry, which has the resources to develop new compounds, and the academia, which has the research and lab capabilities to understand how the compounds work, have enabled the development of this new class of antibiotics,” Mankin said.

“The collaboration between multiple labs with diverse areas of expertise add credibility to the research,” Polikanov said.

While ODLs have yet to be thoroughly investigated for their therapeutic potential, the researchers say that the study findings justify future research in this direction.

“Collaborations with academia with renown expertise in antibiotics like the UIC team help us for this preclinical development,” said Philippe Villain-Guillot, co-founder and chief executive officer of Nosopharm.

More information on Nosopharm, which specializes in the research and development of new antimicrobial molecules, is available online.

Adapted (with modifications) from UIC today, by Jacqueline Carey, posted on April 6, 2018.