NSF-Simons Center for Quantitative Biology at Northwestern to be led by researchers with ties to CBC, Richard Carthew and William Kath

Congratulations to Northwestern University on securing a $10 million grant from NSF and the Simons Foundation that will fund the newly established NSF-Simons Center for Quantitative Biology. The center is expected to bring together scientists from variety of disciplines such as biology, physics and mathematics, to create a collaborative, interdisciplinary environment to pursue bariers-breaking research, very much in line with the CBC mission goals for the greater Chicago region. CBC is especially proud to have supported in the past two co-directors of the center, Richard Carthew and William Kath, NU, who have strong ties to CBC: Carthew was past CBC Catalyst Award recipient (2006) and a speaker at CBC-organized events and both, Carthew and Kath, were mentors to three CBC Scholars.

Funded by NSF and the Simons Foundation, the center will apply mathematics to understand developmental biology 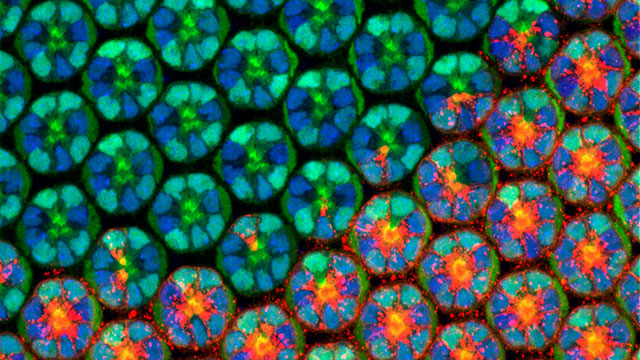 Emergence of complexity in the developing eye of a fruit fly, one of the laboratory animals that will be studied in the NSF-Simons Center for Quantitative Biology.

EVANSTON – Northwestern University has received a $10 million grant to fund research in quantitative biology, an interdisciplinary field that uses mathematical models to describe and analyze the development of living organisms.

Jointly funded by the National Science Foundation (NSF) and the Simons Foundation, the highly competitive grant will establish the NSF-Simons Center for Quantitative Biology. The center will enable innovative collaborative research at the intersection of mathematics and molecular, cellular and organismal biology, to establish new connections and promote interdisciplinary education.

“Northwestern’s collaborative, interdisciplinary research ecosystem is the ideal environment for the new center,” said Jay Walsh, Northwestern’s vice president for research. “Quantitative biology draws on a range of knowledge domains — from the physical and life sciences to mathematics and computer science — in an effort to understand the fundamental ‘rules of life.’ Our faculty strengths across these fields distinguish Northwestern and allow us to establish this dynamic knowledge hub.”

By studying laboratory animals ranging from fruit flies to worms to frogs, the center’s researchers will address fundamental questions about how life develops, including how a single cell can self-assemble into a complex, living animal with elaborate parts, each displaying their own intricate functions. Quantitative biology probes these questions associated with emergent properties in living systems by using mathematical, statistical, computational and big data techniques.

“The center will apply mathematics to developmental biological research, which is uncommon today,” said Richard Carthew, director of the NSF-Simons Center for Quantitative Biology and the Owen L. Coon Professor of Molecular Biosciences in Northwestern’s Weinberg College of Arts and Sciences. “The hope is that mathematics will revolutionize the study of biology in a manner emulating the impact that mathematics has had on physics research.”

The center also will facilitate close, sustained collaborations between Northwestern’s experimental biologists and mathematical scientists. These cross-disciplinary researchers will work at the intersection of their fields — using cutting-edge technologies such as genomics, microscopy, artificial intelligence and computer vision — to uncover insights and approaches that would not have been possible by working in one field alone.

“This funding provides us with a tremendous opportunity to pull together a number of talented researchers into one cohesive group,” said William Kath, the center’s co-director and professor of engineering sciences and applied mathematics in Northwestern’s McCormick School of Engineering. “This will create a whole new set of interactions that will accelerate research tremendously.”

Jay Walsh, Northwestern’s vice president for research (left), and co-directors of the new NSF-Simons Center for Quantitative Biology, Richard Carthew (center) and William Kath, NU, have strong ties to CBC as past CBC award recipients, speakers at CBC-organized events and mentors to CBC Scholars (see below).

“Physicists, engineers and mathematicians were integrated together at Bell Labs and invented the transistor,” Carthew added. “Our hope is that a similar formula of mathematicians and biologists working together will achieve discoveries that otherwise are impossible.”

The center’s interdisciplinary researchers will include Madhav Mani, an assistant professor of engineering sciences and applied mathematics in McCormick and of molecular biosciences in Weinberg, whose research is focused on quantitative biology. A physicist, Mani conducts his work in close collaboration with experimental labs that study the dynamics of organismal development.

“Mathematical abstractions of complex biological phenomena are beginning to help reveal — even detect — novel patterns that synthesize, challenge and guide experimentation,” Mani said. “Such an approach is timely, and required, to generate breakthroughs in light of the nature of questions and abundance of data being generated by labs these days.”

Carole LaBonne, Erastus O. Haven Professor and chair of the department of molecular biosciences at Weinberg, will also lead research within the center. Her project will ask fundamental questions about how cells navigate the decision-making process when choosing which part of the body to contribute to.

“Fundamental, discovery-driven science is at the heart of the center and is the essential foundation that translational and applied research can later build on,” LaBonne said. “Curiosity-driven studies using these model organisms have led to 11 Nobel Prizes and fueled countless major discoveries that have both advanced medical research and transformed our understanding of the natural world.”

Adapted (with modifications) from the Northwestern Now, by Amanda Morris, published on May 24, 2018.