Congratulations to the Chandel team (NU) for a recent publication in Cell Metabolism, “Serine Metabolism Supports Macrophage IL-1β Production.” The authors demonstrate they can modulate the levels of pro-inflammatory macrophage-produced cytokine IL-1β by changing the levels of a single amino acid — serine. Increased serine levels correlated with higher IL-1β levels and a flare-up of inflammation symptoms, and, inversely, decreased levels of serine, caused the levels of IL-1β to drop, thus reducing signs of inflammation (this also proved to be the case in an inflammation mouse model). The authors plan to continue exploring other metabolites and their effect on inflammation, hoping to begin developing new therapeutics.

Chandel received two CBC Awards in the past: an HTS and a Catalyst (2015 and 2011, respectively). In addition, Chandel served on the CBC Catalyst Review Board for four years (2014-2018). The CBC is very grateful to Navdeep for his time dedicated to the Catalyst Review Board, and wishes him continued scientific successes! 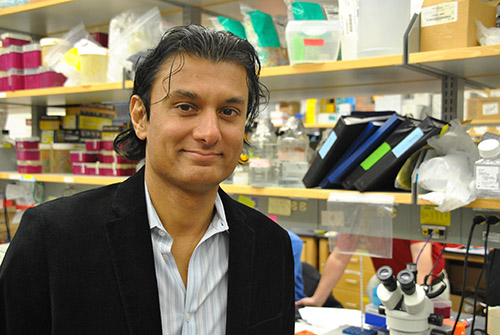 In a new study published in Cell Metabolism, Northwestern Medicine investigators discovered a method to modulate levels of a protein that is known to drive inflammation, by manipulating levels of an amino acid known as serine.

Inflammation has long been identified as a possible driver of many diseases, including cancer, cardiovascular disease and Alzheimer’s. One cause of inflammation is the cytokine IL-1ß, a protein produced by macrophage cells. Though some inflammation is needed for the body’s immune system to work, patients with too-high levels of IL-1ß could be at a higher risk for inflammation-related diseases.

In the current study, the scientists found that it is possible to modulate levels of IL-1ß through serine, an amino acid. When macrophage cells are deprived of serine, their glutathione levels were decreased, which in turn decreased levels of IL-1ß.

“This shows that an amino acid can control inflammation,” said Navdeep Chandel, PhD, the David W. Cugell Professor of Medicine in the Division of Pulmonary and Critical Care Medicine and of Biochemistry and Molecular Genetics, who led the research. “Looking at how metabolic pathways like this can modulate inflammation could provide a new path for drug discovery.”

In a series of experiments, Chandel’s team, including graduate student and first author Arianne Rodriguez, deprived macrophage cells of serine and then activated them with lipopolysaccharide, a molecule that normally causes high inflammation.

Without serine, which controls the synthesis of glutathione — an antioxidant — the cell’s glutathione levels decreased. Since glutathione is necessary to support IL-1ß production, the experiment also caused levels of IL-1ß to decrease, which meant the cell had less inflammation.

“This suggests you need a certain amount of glutathione to maintain inflammation, and that decreasing antioxidants decreased inflammation, not the other way around,” said Chandel, who is also the leader of the Membranes, Organelles & Metabolism Research Program at Robert H. Lurie Comprehensive Cancer Center of Northwestern University.

When the investigators then used a small molecule to inhibit that serine metabolism pathway in a mouse model, they found that it significantly decreased inflammation and improved survival in mice with sepsis.

The next step is to examine whether other metabolic inputs can affect inflammation.

“This is just the tip of the iceberg,” Chandel said. “We’re interested in understanding these pathways and whether drugs that affect the serine metabolism pathway could someday have value in dampening diseases that cause high inflammation.”

February 5, 2019
▸ Macrophages – a dance of life with death
Five (!) CBC community members collaborate on how to speed up heart recovery after an infarct

March 15, 2018
▸ CRISPR then, now and in the future — three current and past NU scientists with multiple links to CBC: Elizabeth McNally, Navdeep Chandel and Eric Sontheimer