Curious if (or which) viruses live in municipal wastewater treatment plants?

In 2014, Brian Murphy and Rachel Poretsky, UIC and George Wells, NU, received a CBC Catalyst Award for the project: “Co-occurrence and Implications of Antibiotic Production and Resistance Genes in the Environment.” On August 14, 2019, the team published an article in Microbial Biotechnology, “Viral composition and context in metagenomes from biofilm and suspended growth municipal wastewater treatment plants.” The publication acknowledges the CBC support.

Using shotgun metagenomics, the trio of scientists and their collaborators analyzed viral composition and associations with the virus-hosting bacteria in two sampled municipal wastewater treatment plants. In the article, the researchers reported that three types of viruses, Myoviridae, Podoviridae and Siphoviridae, from the order Caudovirales, were the dominant viral families in both wastewater samples.

Caudovirales are also known as the “tailed bacteriophages” (see the figure below) and they contain double stranded DNA genomes. Upon encounter, the bacteriophages use their “tails” to attach to, and to inject their DNA into a bacterium, taking it “hostage.” Once inside, the phages hijack the bacterial molecular machineries in order to replicate. In the article, the authors address the impact the Caudovirales may have on the bacterial biodiversity in aquatic environments. 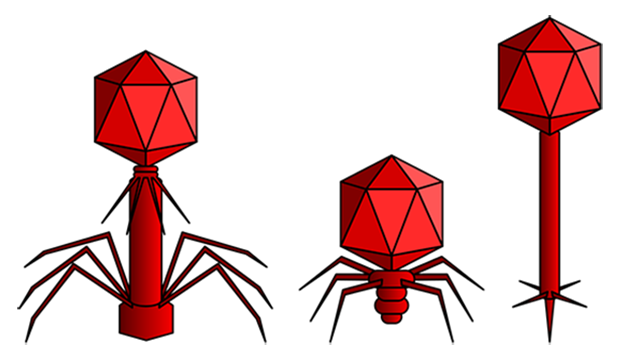 Wastewater treatment plants (WWTPs) contain high density and diversity of viruses which can significantly impact microbial communities in aquatic systems. While previous studies have investigated viruses in WWTP samples that have been specifically concentrated for viruses and filtered to exclude bacteria, little is known about viral communities associated with bacterial communities throughout wastewater treatment systems. Additionally, differences in viral composition between attached and suspended growth wastewater treatment bioprocesses are not well characterized. Here, shotgun metagenomics was used to analyse wastewater and biomass from transects through two full‐scale WWTPs for viral composition and associations with bacterial hosts. One WWTP used a suspended growth activated sludge bioreactor and the other used a biofilm reactor (trickling filter). Myoviridae, Podoviridae and Siphoviridae were the dominant viral families throughout both WWTPs, which are all from the order Caudovirales. Beta diversity analysis of viral sequences showed that samples clustered significantly both by plant and by specific sampling location. For each WWTP, the overall bacterial community structure was significantly different than community structure of bacterial taxa associated with viral sequences. These findings highlight viral community composition in transects through different WWTPs and provide context for dsDNA viral sequences in bacterial communities from these systems.

This work was supported by the Chicago Biomedical Consortium with support from the Searle Funds at The Chicago Community Trust, as well as by startup funds from Northwestern University.

June 14, 2018
▸ A swimmer’s gut
CBC awardee, Rachel Poretsky, UIC, is looking into the cause-effect correlations between the athletic gut microflora and the athlete’s performance