Dan in a spotlight!

Congratulations to Daniel Dombeck, NU, whose recent work on the mechanisms of spacio-temporal memory formation, published in the November 2018 issue of Nature Neuroscience, has been recognized by the National Institute of Health (NIH) in NIH Research Matters. NIH Research Matters is a weekly update of NIH research highlights reviewed by NIH’s experts. It’s published by the Office of Communications and Public Liaison in the NIH Office of the Director. Daniel is a CBC Junior Investigator. Since 2017, he has also served on the CBC Catalyst Review Board.

How the brain keeps track of time 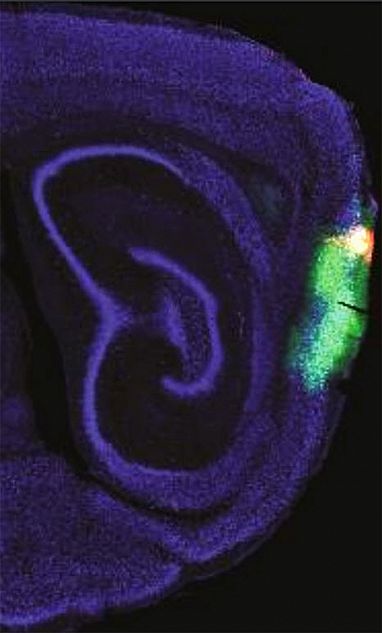 Time-keeping cells (green) in the medial entorhinal cortex of a mouse. Heys and Dombeck, Nature Neuroscience

When you remember an event, your brain records information about the time and place where it happened. Memories like these, which involve both space and time, are called episodic memories. Episodic memories can be lost with damage or disease to specific brain regions, as with Alzheimer’s disease—a condition in which memories of when and where experiences have happened can degrade over time.

Episodic memories are made in the medial temporal lobe. This brain area includes the hippocampus and medial entorhinal cortex. Brain cells (neurons) that record spatial information have been found in both brain regions. Neurons involved in tracking time have also been found in the hippocampus, but less is known about the role of the medial entorhinal cortex in time keeping.

To investigate whether brain cells in this brain region also help track time, a team led by Drs. James Heys and Daniel Dombeck at Northwestern University carried out a series of studies in mice. The research was supported in part by NIH’s National Institute of Mental Health (NIMH). Results were published in the November 2018 issue of Nature Neuroscience.

The researchers set up an experiment in which mice ran on a treadmill surrounded by a virtual reality screen. The mice saw a virtual track as they ran. Using a brain imaging technique, the researchers tracked neuron activity in the medial entorhinal cortex.

When the animals were running through the track, the specific set of cells responsible for recording spatial information were active. Once the mice stopped at the invisible door, those cells turned off and a different set of cells became active. These new cells appeared to keep track of how long the mice waited for the door to open. The ensemble of these timing cells predicted how long the mice waited in the trials. 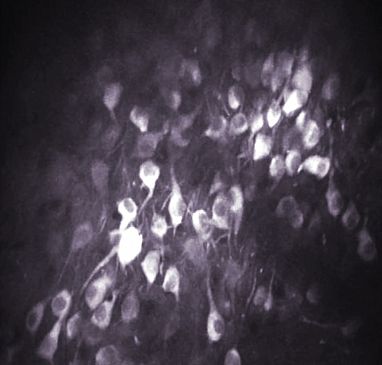 Time-keeping cells light up as the mouse waits at an invisible door on a virtual reality track. Heys and Dombeck, Nature Neuroscience

When mice were given a different virtual track to run through, many of the same neurons responded to the same spatial or time components across the different tracks. This suggests that there are two separate sets of brain circuits in the medial entorhinal cortex that are specifically attuned to record either time or spatial information.

“Patients with Alzheimer’s disease notably forget when things happened in time,” Heys says. “Perhaps this is because they are losing some of the basic functions of the entorhinal cortex, which is one of the first brain regions affected by the disease.”

This finding might lead to new early-detection tests for Alzheimer’s, Dombeck adds. “We could start asking people to judge how much time has elapsed or ask them to navigate a virtual reality environment—essentially having a human do a ‘door stop’ task.”

Source:
Adapted (with modifications) from the NIH Research Matters, by Tianna Hicklin, published on November 6, 2018.