Congratulations to Karl Scheidt, NU, who was interviewed for Chicago Crain’s Business to talk about his recent work on the development of novel cancer therapeutics. The molecules synthesized and studied by Scheidt and his collaborators target the motility of cancer cells with a goal of preventing cancer metastasis. In the interview, Scheidt highlights the benefits of basic scientist-clinician collaboration as well as provides insights into the lengthy process of moving a discovery from ‘bench to bed.’ Scheidt and Raymond Berg (currently at Oregon Health & Science University), are senior co-authors on the study published in Nature Communications. Both scientists are past CBC awardees (see below) and CBC is proud to have supported their research.

Northwestern researchers on a big breakthrough 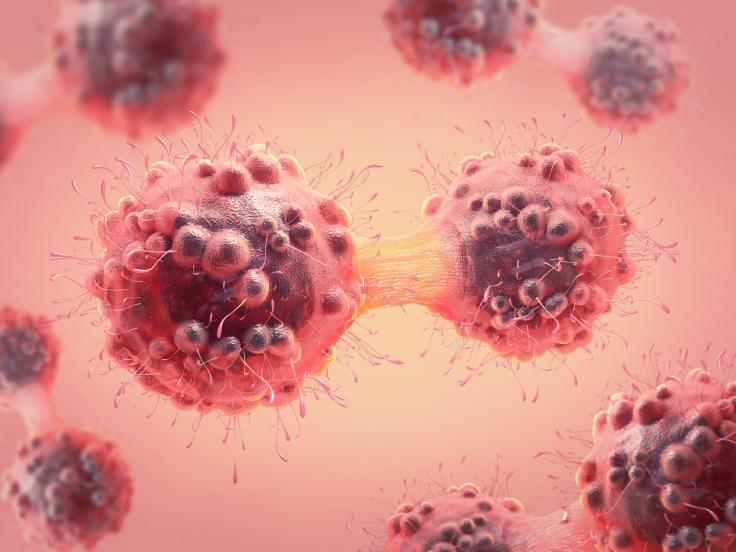 Cancer cells in the process of mitosis. (Source: Thinkstock)

Fighting cancer requires a one-two punch: killing cancer cells and stopping their movement before they spread to other areas in the body. New research led by teams from Northwestern University and Oregon Health & Science University shows that it may be possible to significantly slow down the growth of cancer cells, potentially making them easier to target with existing treatments like chemotherapy and radiation.

The study, published in June in the journal Nature Communications, also includes researchers from Xiamen University in China, University of Chicago and the University of Washington. Research funding was provided by the Department of Defense and the Veteran’s Administration.

“Cancer cells are lethal because they move; they’re alive,” says Karl Scheidt, director of the Center for Molecular Innovation and Drug Discovery at Northwestern University, and co-leader of the study. “How do we slow down that process? That has been the Holy Grail to figure out. We’re looking at a completely different way of treating the disease.” Here’s what else he had to say:

Crain’s: Why is this drug so important?

Scheidt: The majority of cancer treatment therapies today are directed toward killing cancer. No one has developed a therapy that can stop cancer cells from moving around the body. Movement is key. For the vast majority of cancer—breast, prostate, lung, colon, and others—if it’s detected early when it’s a small lump in that organ and it has not spread, you will live. And generally, if you find it late, after it has spread throughout your body, it can be treated but it will take your life. Once we can slow down cell movement, it can potentially supercharge other treatments like chemotherapy, radiation and whatever else is part of the current standard of care, because it will be easier to hit the cancerous targets.

What have you found so far?

In animal tests, the drug is highly effective so far against four cancer types: breast, colon, lung and prostate. It’s shown to stop the spread of cancerous cells in animal models by up to 90 percent. The data is really promising and we’re excited about the possibilities. Ultimately we want to leverage what we’ve learned about the fundamentals of cell motility or movement to control other processes in the body beyond cancer.

How did you start working on this drug?

Ten years ago, I met Ray Bergan, who was at Northwestern at the time and an oncologist at the Lurie Cancer Center. He was studying motility in cancer cells and I was interested in his work. We thought that together we could develop a drug that would inhibit the movement of cancer cells. (Bergan is now the Division Chief of Hematology and Medical Oncology and professor of medicine at Oregon Health & Science University and led the study with Scheidt.) A clinician and a basic scientist working together was very unusual at the time but Northwestern and Lurie are really spectacular at encouraging that type of collaboration.

We started by taking a clue from nature. Men in Asia who were eating a diet rich in soy were found to have a lower rate of prostate cancer. Ray was working with genistein, a key ingredient in soy and the compound that has been used for years in motility studies. But there were too many side effects and other issues, so it could never be used in clinical studies. What we developed was a new molecular entity, KBU2046, which improves on the anti-motility characteristics of genistein. Through chemistry, we were able to enhance the good and mitigate the bad side effects seen with the original natural product genistein.

How does it work?

The key to this drug is engaging the heat shock proteins, the ‘cleaners’ of a cell. The drug binds to these cleaner proteins, which changes their shape. Since these heat shock proteins are no longer the proper shape, they don’t work normally. The ultimate impact is that it decreases the ability for tumor cells to move. Less movement equals less metastasis which equals potentially more effective treatments for cancer by containing the disease to a local area as opposed to it spreading throughout the body.

What’s next in the process?

Four years ago, Ray and I started Third Coast Therapeutics, based here in Evanston, to help bring the drug to market and we have an exclusive option at Northwestern to develop the technology. We are in the process of raising a Series A round of funding to get to clinical trial. Funding is always a challenge. Our best estimate is that will take two years and $5 to $10 million in funding. As our first initiative, we are going to go after triple negative breast cancer, a highly aggressive disease with very few treatment options and a high recurrence rate. Once we see the impact, the door is then open to treat lung, prostate, colon and other cancers. We hope in the next five years this drug will be available to help enhance cancer treatment in patients. We think it can change how oncologists and patients treat this disease and we hope it will tip the scale in favor of the patient so you have more time on the clock and a better quality of life.

Adapted (with modifications) from the Chicago Crain’s Business by Monica Ginsburg, published on July 12, 2018.