Congratulations to the members of the Lengyel team, UChicago, for their recent publication in Cell Metabolism. In the paper, the scientists dissect the molecular mechanisms contributing to the aggressive spread of ovarian cancer within the abdominal cavity. The role of glycogen mobilization as source of energy is investigated and proposed as a novel step that could be targeted in future anti-cancer drug developments. Three past CBC awardees are involved in the published study: Ernst Lengyel and his lab members Hilary Kenny and Yilin Zhang, UChicago. Kenny was a recipient of a CBC HTS Award (2013) and Zhang of a CBC Postdoctoral Research Award (2014; renewed in 2015). In 2013, Lengyel also co-organized and spoke at the CBC Exploratory Workshop dedicated to ovarian cancer. CBC is proud to have support their research. 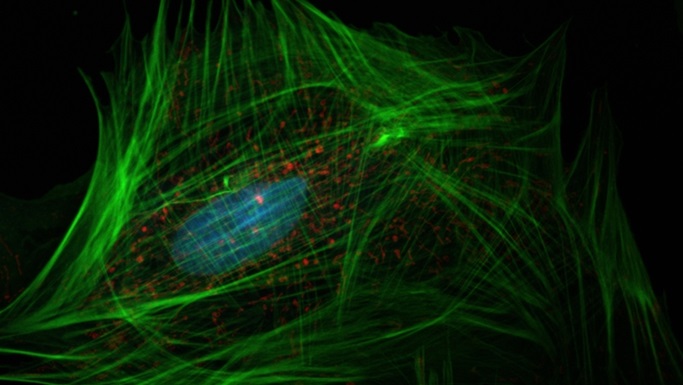 In nearly 80 percent of women with ovarian cancer, the disease has already spread to the omentum before it was diagnosed. Within the omentum — a large, energy-dense fat pad that covers the intestines — the cancer grows even faster.

In the December 4, 2018 issue of Cell Metabolism, published online August 30, a multi-center research team based at the University of Chicago Medicine describes how rapidly spreading ovarian cancer cells take the next steps. Once they infiltrate the omentum and begin to deplete the fat cells there, the tumor recruits cancer-associated fibroblasts (CAFs). These cells accelerate cancer proliferation and spread by enhancing the mechanisms that cancer cells use, such as increasing blood flow to the tumor, to generate additional energy sources.

In their current study, “Fibroblasts mobilize tumor cell glycogen to promote proliferation and metastasis,” the researchers used a technique called quantitative phosphoproteomics to characterize the reciprocal signaling between human ovarian cancer cells and the CAFs that hasten the spread of abdominal cancers. 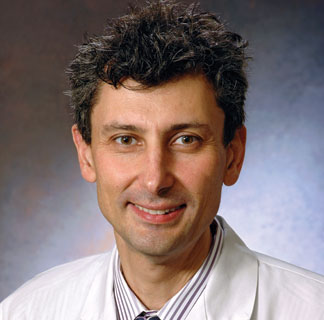 “This is the first time that the role of glycogen in cancer metastasis has been thoroughly investigated,” said the study’s senior author, Ernst Lengyel, MD, PhD, the Arthur L. and Lee G. Herbst Professor and Chairman of Obstetrics and Gynecology at the University of Chicago.

“No systematic study of the signaling pathways initiated by human cancer cells and cancer-associated fibroblasts has been performed,” he added. “We think this could have significant clinical implications.” 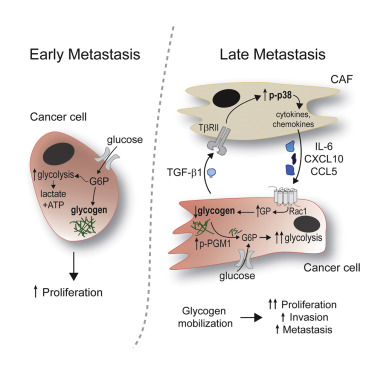 The authors summarized the cascade of events that fuel disease spread: Fibroblast-derived chemical signals help mobilize glycogen in cancer cells, which is then metabolized into glucose/sugar. This is used by cancer cells as a source of energy, helping those cells invade other tissues. It also boosts tumor aggressiveness, enhancing proliferation, invasion and metastasis.

The authors suggest, however, that inhibition of one step in the process, blocking glycogen mobilization in cancer cells by interfering with enzymes mobilizing glycogen, or inhibiting signaling pathways that prevent the glycogen mobilization stimulated by CAFs, “might be a therapeutic strategy for the reduction of tumor dissemination in abdominally metastasizing cancers after optimal tumor reduction.”

This study was supported by the Cancer Research Foundation Fletcher Scholars Program, Bears Care, the National Cancer Institute, and the European Commission.

Adapted (with modifications) from the UChicago Medicine, The Forefront by John Easton, published on September 11, 2018.