Congratulations to Guillermo Ameer, NU, recently interviewed on Fox 32 Chicago News. The story covered a novel type of bandage developed in the Ameer lab, that has several unique properties. Originally the bandage is liquid but solidifies once applied to the wound, can cover any size and shape of a wound, and, perhaps most importantly, contains a wound-healing-substance — laminin — that stimulates tissue regeneration. The new bandage still awaits extensive clinical trials before reaching the market, but carries promise for those who suffer from hard-to-heal wounds, e.g. caused by diabetes. Ameer has many ties to CBC — he received a total of five CBC Awards in the past (see below). Ameer’s work on wound healing was also featured at the inaugural CBCAN meeting in 2017, as an example of a successful entrepreneurial initiative in academia.

Scientists at Northwestern University have developed a revolutionary new bandage.

They say it can dramatically accelerate the healing time for wounds and they’re hoping one day it’ll be a must-have item for medicine cabinets across the country.

A small lab at Northwestern University in Evanston has created a regenerative bandage that can teach the body to heal its own wounds without any drugs. 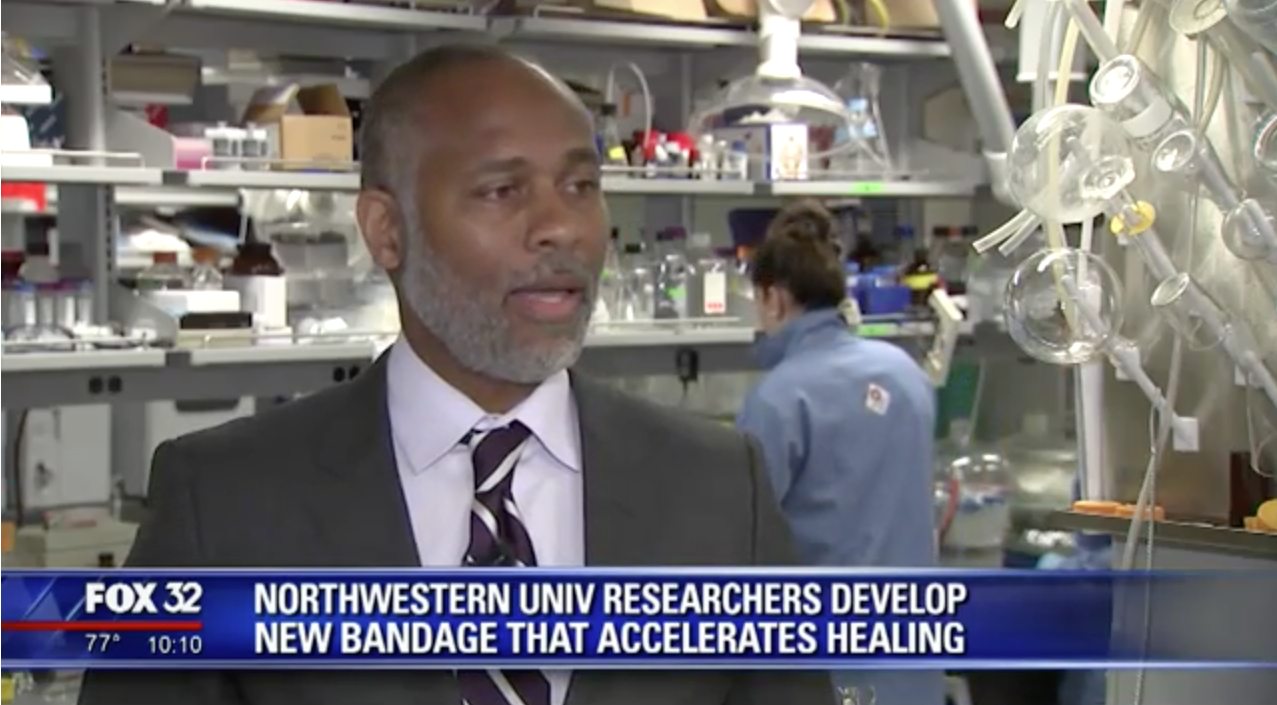 Guillermo Ameer and his staff of biomedical engineers originally developed the bandage to address non-healing diabetic foot ulcers — a problem that affects one in 7 diabetics. The bandage starts as a liquid, but when exposed to body temperature, it quickly solidifies into a gel. You can see it change right before your eyes.

The secret ingredient is a protein found in body tissue called Laminin. It encourages cells to gravitate and stick to one another and grow or regenerate. It also works as an antioxidant — reducing inflammation, warding off cell damage and conforms to any wound shape as they demonstrated for us on this pork roast.

Jaqueline Burke has diabetes. Helping other diabetics has become her passion. She’s a PHD student at Northwestern, working in Ameer’s lab.

“The solution could help heal wounds of all people. Wounds are very common and the quicker you can heal the better,” she said.

Another benefit is that replacing the bandage is as easy as rinsing it off with a saline spray.

Northwestern scientists are hoping this liquid bandage could be available in a few years and change the way we all deal with scrapes and cuts that are part of our everyday life.

The bandage faces more clinical testing and still needs FDA approval before it can hit the market.

Adapted (with modifications) from the Fox 32 Chicago by Sylvia Perez, published on August 16, 2018.