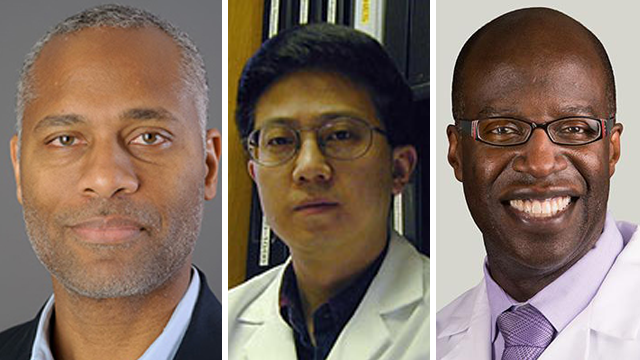 Congratulations to a CBC Catalyst team of Guillermo Ameer, NU, Tong-Chuan He and Russell Reid, UChicago, on their recent review published in Genes & Diseases, titled “Stem Cell Therapy for Chronic Skin Wounds in the Era of Personalized Medicine: from Bench to Bedside.”

The three scientists, who are senior authors on the review, acknowledge CBC’s support of their work, received via a 2013 CBC Catalyst Award for the project titled: “Craniofacial Tissue Engineering with Citric-Acid Based Nanocomposite Scaffolds.”

The review addresses the current state of the therapies used in chronic wound healing pointing out that the presently-used methods are insufficient from both patient and economic viewpoints. They propose using stem cells to address the deficiencies and to hopefully improve therapies outcomes. The cellular and molecular mechanisms of wound healing and of the role that the stem cells play in signaling and recruitment to the wound site of fibroblasts and other factors that speed up the damaged tissue repair are discussed in detail. Finally, the initial results of clinical trials that rely on utilizing stems cells in healing chronic skin wounds are presented.

Additional ties of the three CBC Catalyst team members to the Chicago Biomedical Consortium as well as related articles addressing their work are listed below.

With the significant financial burden of chronic cutaneous wounds on the healthcare system, not to the personal burden mention on those individuals afflicted, it has become increasingly essential to improve our clinical treatments. This requires the translation of the most recent benchtop approaches to clinical wound repair as our current treatment modalities have proven insufficient. The most promising potential treatment options rely on stem cell-based therapies. Stem cell proliferation and signaling play crucial roles in every phase of the wound healing process and chronic wounds are often associated with impaired stem cell function. Clinical approaches involving stem cells could thus be utilized in some cases to improve a body’s inhibited healing capacity. We aim to present the laboratory research behind the mechanisms and effects of this technology as well as current clinical trials which showcase their therapeutic potential. Given the current problems and complications presented by chronic wounds, we hope to show that developing the clinical applications of stem cell therapies is the rational next step in improving wound care. 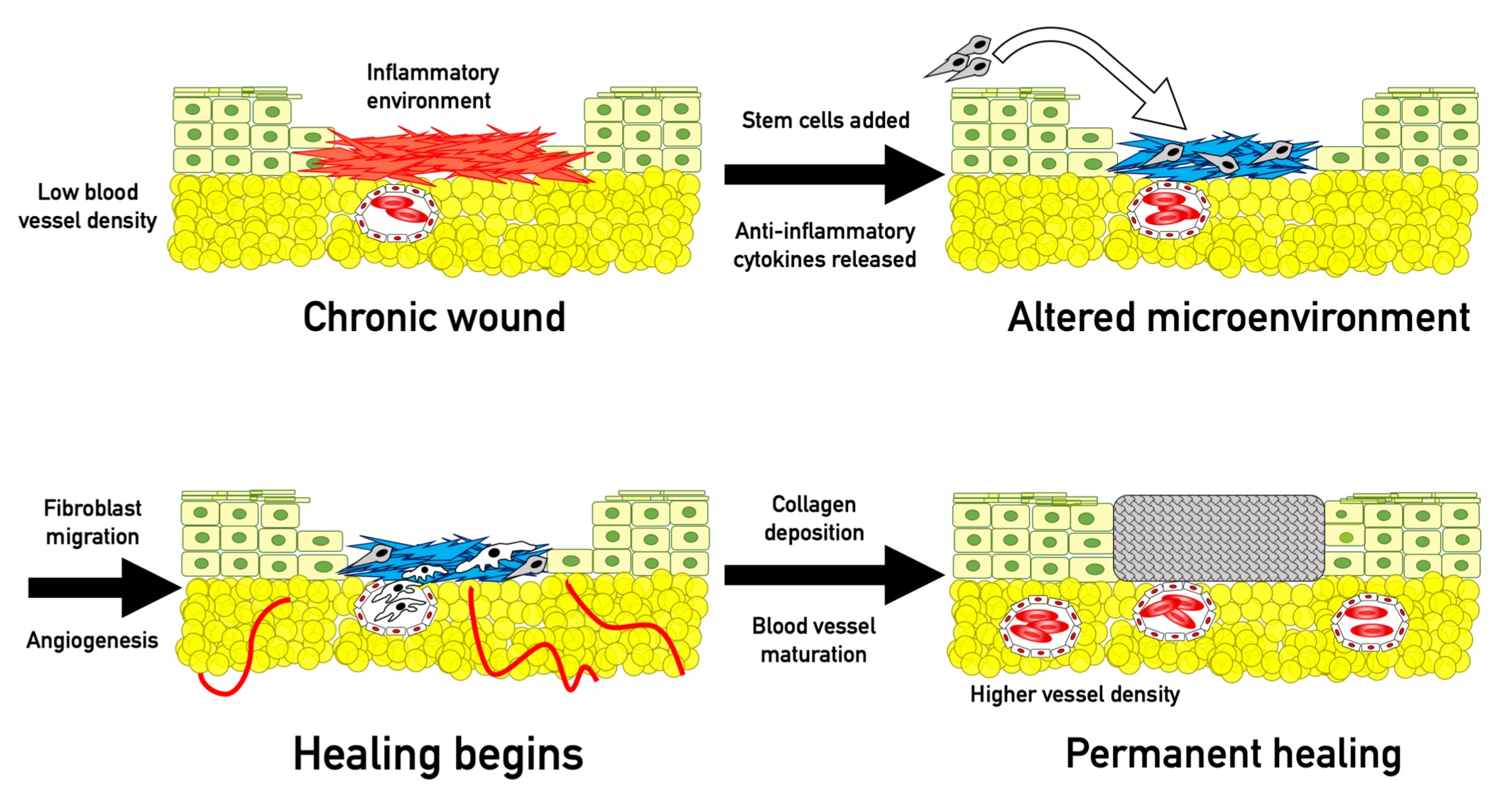 Effects of stem cells. Stem cells improve the conditions in chronic wounds primarily through alteration of the microenvironment. Stem cells have been shown to produce pro-angiogenic and anti-inflammatory cytokines, especially IL-10, TGF-ß, and VEGF. They also reduce the concentration of pro-inflammatory cytokines, mainly IL-1ß, TNF-alpha and IL-6. Resolution of inflammation allows proliferation of fibroblasts and blood vessels, eventually resulting in repair as previously detailed. Source: (sciencedirect.com)

The contributing authors’ laboratories were supported in part by research grants from the National Institutes of Health (CA226303, DE020140 to TCH and RRR), the U.S. Department of Defense (OR130096 to JMW), the Chicago Biomedical Consortium with support from the Searle Funds at The Chicago Community Trust (R.R.R., T.C.H., and G.A.A.), the Scoliosis Research Society (TCH and MJL), and the National Key Research and Development Program of China (2016YFC1000803 and 2011CB707906). This project was also supported in part by the National Center for Advancing Translational Sciences of the National Institutes of Health through Grant Number UL1 TR000430. EC was supported by the Summer Research Program of The University of Chicago Pritzker School of Medicine. TCH was also supported by the Mabel Green Myers Research Endowment Fund and The University of Chicago Orthopaedic Alumni Fund. Funding sources were not involved in the study design; in the collection, analysis and interpretation of data; in the writing of the report; and in the decision to submit the paper for publication.

May 30, 2019
▸ Dissecting the roles of 14(!) BMPs
A CBC Catalyst Award to Tong-Chuan He and Russell Reid, UChicago, contributes to understanding the mechanisms behind bone and other mesenchyme-derived tissues differentiation