CBC Postdoctoral Research Award to Andrew Stephens, a postdoc in John Marko’s lab, NU, funds an intricate work on the mechanisms of nuclear blebbing frequently seen in cancer cells and in progeria 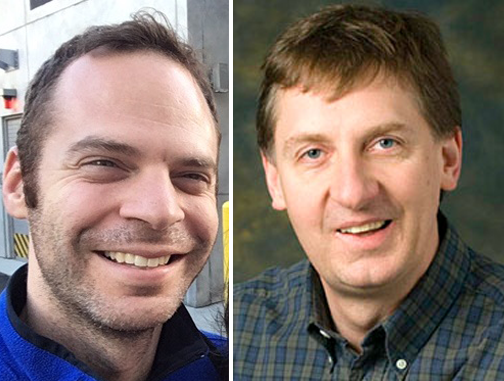 “Physicochemical mechanotransduction alters nuclear shape and mechanics via heterochromatin formation,” is the title of a recent publication in Molecular Biology of the Cell, which is attributed to CBC funding. The research was supported by a CBC Postdoctoral Research Award that Andrew Stephens, a postdoc in John Marko’s lab, NU, received in 2016, for the project: “Imaging the Dynamics and Mechanics of Nuclear Blebbing.”

Aberrantly shaped nuclei are found in many cancer cells and are also associated with other diseases, e.g., the Hutchinson-Gilford Progeria Syndrome. The nuclear “blebs” — or outward nucleoplasm-filled protrusions of the otherwise smooth nuclear membrane — are thought to be caused by DNA damage and changes in chromatin-based nuclear rigidity and/or by defects in the nuclear membrane structure resulting in its localized weakening and eventual rupture.

The current study investigates the role of the mechanosensitive ion channels (MSCs) located in the nuclear membrane which, when activated by increased extracellular multivalent cations, increase heterochromatin levels and suppress nuclear blebbing in cells with DNA damage or nuclear membrane defects. Moreover, the MSCs activation reverses the nuclear blebbing in some cancer cells and in cultured progeria cells. Whether this proposed nucleus structure protective mechanism could be explored as potentially therapeutic, remains to be seen.

In addition to Stephens, who is first author on the current study, and Marko who is the senior author, two additional CBC Awardees contributed to the publication: Vadim Backman and Thomas O’Halloran, both at NU. The scientists were PIs on a U54 grant from the National Cancer Institute, which was leveraged by a 2015 CBC Lever Award to fund the Chicago Region Physical Science-Oncology Center (CR-PSOC). Backman was a co-PI on the CBC Lever and O’Halloran a co-leader of CR-PSOC. Other CBC ties of the aforementioned researchers are listed below.

Congratulations to all authors on the publication! 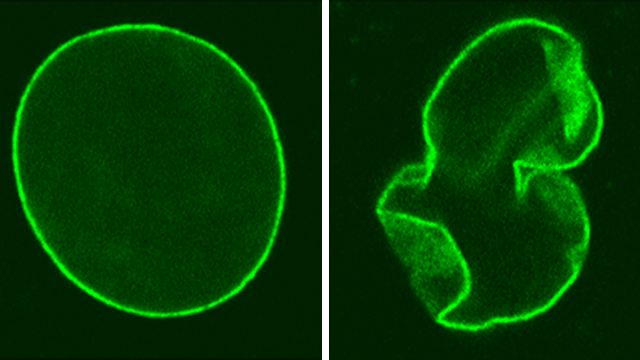 Hutchinson-Gilford Progeria Syndrome. HGPS is a childhood disorder caused by mutations in one of the major architectural proteins of the cell nucleus. In HGPS patients the cell nucleus has dramatically aberrant morphology (right) rather than the uniform shape typically found in healthy individuals (left). (Source: Wikimedia Commons)

The nucleus houses, organizes, and protects chromatin to ensure genome integrity and proper gene expression, but how the nucleus adapts mechanically to changes in the extracellular environment is poorly understood. Recent studies have revealed that extracellular physical stresses induce chromatin compaction via mechanotransductive processes. We report that increased extracellular multivalent cations lead to increased heterochromatin levels through activation of mechanosensitive ion channels (MSCs), without large-scale cell stretching. In cells with perturbed chromatin or lamins, this increase in heterochromatin suppresses nuclear blebbing associated with nuclear rupture and DNA damage. Through micromanipulation force measurements, we show that this increase in heterochromatin increases chromatin-based nuclear rigidity, which protects nuclear morphology and function. In addition, transduction of elevated extracellular cations rescues nuclear morphology in model and patient cells of human diseases, including progeria and the breast cancer model cell line MDA-MB-231. We conclude that nuclear mechanics, morphology, and function can be modulated by cell sensing of the extracellular environment through MSCs and consequent changes to histone modification state and chromatin-based nuclear rigidity.

We thank Yixian Zheng for providing us with MEF LB1-/- cells (Shimi et al., 2015). We thank Aykut Erbas¸, Sumitabha Brahmachari, and Ronald Biggs for helpful discussions. We thank Reza Vafabakhsh and Michael Schamber for advising us regarding the transient calcium influx experiments. We thank QBIC at Northwestern University for ICP-MS analysis. We thank the Northwestern Biological Imaging Facility and Director Jessica Hornick for use of the Delta Vision microscope for time lapse imaging. A.D.S. is supported by Pathway to Independence Award NIHGMS K99GM123195. A.D.S., P.Z.L, E.J.B., and J.F.M. are supported by National Science Foundation (NSF) Grants DMR-1206868 and MCB-1022117 and by National Institutes of Health (NIH) grants GM-105847, CA-193419, and, via subcontract, DK-107980. S.A.A. and R.D.G. are supported by NIH GM-106023, CA 193419, and Progeria Research Foundation PRF 2013-51. H.C. and T.V.O. are supported by Physical Science–Oncology Center, National Cancer Institute, Grant U54CA193419. L.M.A. and V.B. are supported by NIH grants R01CA200064 and R01CA155284, NSF grant CBET-1240416, and the Lungevity Foundation. This work was funded by the Chicago Biomedical Consortium with support from the Searle Funds at the Chicago Community Trust through a Postdoctoral Fellowship to A.D.S.