Congratulations to Neil Kelleher, NU, for contributing to a recent publication in Clinical Cancer Research, “Precision Targeting with EZH2 and HDAC Inhibitors in Epigenetically Dysregulated Lymphomas.” The authors investigate an interaction between two pathways: enhancer of zeste homolog 2 (EZH2) and histone deacetylase (HDAC). What they find is that — when both EZH2 and HDAC are inhibited simultaneously in cell culture and a mouse lymphoma model — a synergistic anti-cancer effect is observed for certain types of lymphomas, specifically the so called EZH2 dysregulated lymphomas. The findings have a potential clinical implication and indeed, the authors report entering clinical trials.

Kelleher’s many ties to CBC include his recruitment to NU in 2010 with help from the CBC Recruitment Resources Award. Hence his recognition as a CBC Senior Investigator. Kelleher’s other CBC awards and community contributions are listed below the article. The CBC is proud to have played a role in Kelleher’s recruitment and to have helped support his research over the years. 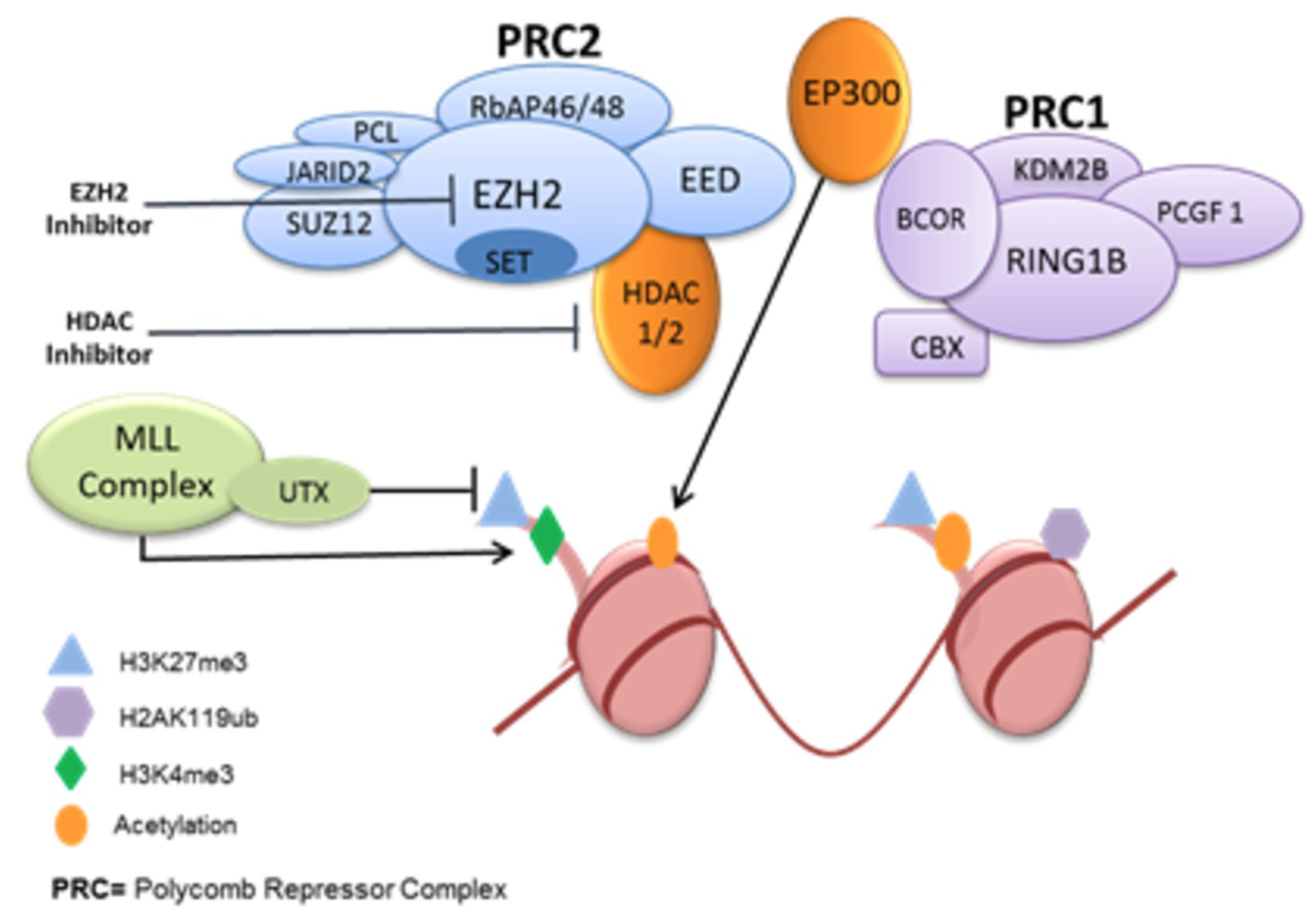 Given the frequency of EZH2 mutations along with HAT mutations, dual inhibition of these deregulated pathways may serve as a rational method to reverse transcriptional repressed state. (Source: Clin. Canc. Res.)

PURPOSE:
Both gain-of-function EZH2 mutations and inactivating histone acetyltransferases mutations, such as CREBBP and EP300, have been implicated in the pathogenesis of germinal center (GC) derived lymphomas. We hypothesized that direct inhibition of EZH2 and HDAC would be synergistic in GC-derived lymphomas.

EXPERIMENTAL DESIGN:
Lymphoma cell lines (n=21) were exposed to GSK126, an EZH2 inhibitor, and romidepsin, a pan-HDAC inhibitor. Synergy was assessed by Excess over Bliss. Western blot, mass spectrometry and co-immunopreciptiation were performed. A SU-DHL-10 xenograft model was utilized to validate in vitro findings. Pre-treatment RNA-sequencing of cell lines was performed. MetaVIPER analysis was used to infer protein activity.

RESULTS:
Exposure to GSK126 and romidepsin demonstrated potent synergy in lymphoma cell lines with EZH2 dysregulation. Combination of romidepsin with other EZH2 inhibitors also demonstrated synergy suggesting a class effect of EZH2 inhibition with romidepsin. Dual inhibition of EZH2 and HDAC led to modulation of acetylation and methylation of H3K27. The synergistic effects of the combination was due to disruption of the PRC2 complex secondary to acetylation of RbAP 46/48. A common basal gene signature was shared among synergistic lymphoma cell lines and were characterized by upregulation in chromatin remodeling genes and transcriptional regulators. This finding was supported by metaVIPER analysis which also revealed that HDAC 1/2 and DNMT were associated with EZH2 activation.

STATEMENT OF TRANSLATIONAL RELEVANCE:
Given the prevalence of EZH2 mutations and HAT mutations in germinal center diffuse large B-cell lymphoma, the rational combination of EZH2 inhibition and HDAC inhibition was explored. Using a panel of 21 lymphoma cell lines, we demonstrate that exposure to dual inhibition of EZH2 and HDACs was synergistic in EZH2 dysregulated lymphomas. The synergistic effects of EZH2 and HDAC inhibition may be attributed to the disassembly of the PRC2 complex. In a mouse xenograft model of SU-DHL-10, the combination led to tumor growth delay and an improvement in overall survival. A basal common genetic signature amongst synergistic cell lines was identified using GSEA and metaVIPER analysis and correlates with therapeutic response. The novel combination of dual EZH2 and HDAC inhibition may serve as a future precision medicine therapeutic platform. A clinical trial to further explore this combination is in development.