New insights into the mechanism of methane metabolism by copper-binding bacteria revealed in a study from the Rosenzweig lab and CBC Senior Investigator, Neil Kelleher, NU

Congratulations to three NU researchers with ties to CBC, co-authors on the recent publication in the journal Science: Amy Rosenzweig (senior author), Neil Kelleher (second senior author) and Paul Thomas (co-author). Rosenzweig is a recipient of a CBC Postdoctoral Research Award (2016) and Kelleher is a CBC Senior Investigator, recruited to NU in 2010, with help of a CBC Recruitment Resources Award. The same year, Kelleher also received a CBC Catalyst Award. Kelleher and Thomas, both members of the NU Proteomics Center of Excellence which was established with CBC support, participated in several CBC-organized events (see below). The new Science paper, titled “The biosynthesis of methanobactin,” describes two novel proteins that play a role in methane metabolism of methanotrophic bacteria. A better understanding of methane metabolism will accelerate research on the potential use of these microorganisms in lowering levels of greenhouse gases, as well as other applications.

Bacteria eats greenhouse gas with a side of protein 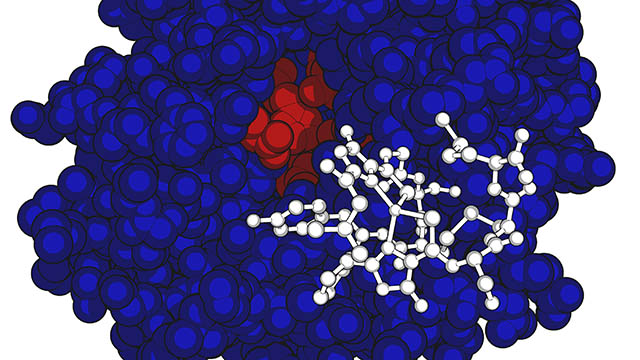 The structure for copper-bound methanobactin (in white) overlays the modeled MbnB protein structure shown in red and blue.

EVANSTON – With the ability to leach heavy metals from the environment and digest a potent greenhouse gas, methanotrophic bacteria pull double duty when it comes to cleaning up the environment.

But before researchers can explore potential conservation applications, they first must better understand the bacteria’s basic physiological processes. Northwestern University’s Amy C. Rosenzweig recently has constructed another section of the puzzle. Her laboratory has identified two never-before-studied proteins, called MbnB and MbnC, as partially responsible for the bacteria’s inner workings. 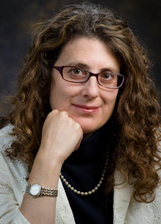 “Our findings extend far beyond methanotrophic bacteria,” said Rosenzweig, the Weinberg Family Distinguished Professor of Life Sciences and professor of molecular biosciences and chemistry in Northwestern’s Weinberg College of Arts and Sciences. “These two proteins are found in a range of other bacteria, including human pathogens.”

The paper publishes [tomorrow,] March 23, in the journal Science.

Methanotrophic bacteria, or more simply “methanotrophs,” take copper from the environment to install into the molecular machinery that metabolizes methane, turning it into methanol for food. To acquire copper, many methanotrophs secrete a chemically modified peptide called methanobactin, which tightly binds to copper ions to pull them into the cell. Until now, the cellular machinery that drives the formation of methanobactin has been little understood.

“The involvement of a metal-requiring enzyme in forming these types of chemical groups is unprecedented, and neither of the two proteins have been studied previously,” Rosenzweig said. “Moreover, similar enzymes seem to be produced in other contexts, suggesting that this chemistry is important beyond the production of methanobactin.”

This discovery makes it easier for researchers to study methanobactin because they can work with the proteins in test tubes rather than manipulate entire living microorganisms. It also brings the world closer to methanotrophs’ promising applications. Many people imagine using filters constructed from the bacteria to scrub methane out of the atmosphere or to help remove methane from natural gas reserves. But Rosenzweig believes that because of methanobactin production, methanotrophs have applications that extend beyond cleaning up the environment.

Because methanobactin binds copper so tightly, it has been investigated as a treatment for Wilson disease, a rare genetic disorder in which patients’ bodies cannot eliminate the copper they ingest in food, so it accumulates in the brain and liver. Some researchers also believe that methanobactin has antibacterial properties and could be used in a new class of antibiotics.

“Now that we know which microbial genes and proteins to look for, and now that we know what some of the key proteins do, we can effectively predict which species will make new and different methanobactins,” Rosenzweig said. “And we can test those compounds for bioactivities.”

The study is titled “The biosynthesis of methanobactin.” Grace E. Kenney, a graduate student in Rosenzweig’s laboratory, served as the paper’s first author.

Adapted (with modifications) from Northwestern Now, by Amanda Morris, posted on March 22, 2018.

Three authors on the paper — Rosenzweig, Kelleher and Thomas — have ties to CBC: